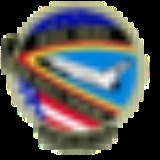 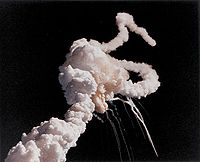 The tenth mission for Challenger, STS-51-L was scheduled to deploy the second in a series of Tracking and Data Relay Satellite
Tracking and Data Relay Satellite
A Tracking and Data Relay Satellite is a type of communications satellite that forms part of the Tracking and Data Relay Satellite System used by NASA and other United States government agencies for communications to and from independent "User Platforms" such as satellites, balloons, aircraft,...
s, carry out the first flight of the Shuttle-Pointed Tool for Astronomy (SPARTAN-203)/Halley's Comet Experiment Deployable in order to observe Halley's Comet, and carry out several lessons from space as part of the Teacher in Space Project
Teacher in Space Project
The Teacher in Space Project was a NASA program announced by Ronald Reagan in 1984 designed to inspire students, honor teachers, and spur interest in mathematics, science, and space exploration....
and Shuttle Student Involvement Program (SSIP). The flight marked the first American orbital mission
Human spaceflight
Human spaceflight is spaceflight with humans on the spacecraft. When a spacecraft is manned, it can be piloted directly, as opposed to machine or robotic space probes and remotely-controlled satellites....
to involve in-flight fatalities. It was also the first American human spaceflight mission to launch and fail to reach space; the first such mission in the world had been the Soviet
Soviet Union
The Soviet Union , officially the Union of Soviet Socialist Republics , was a constitutionally socialist state that existed in Eurasia between 1922 and 1991....
Soyuz 18a
Soyuz 18a
Soyuz 18a was a manned Soyuz spacecraft launched by the Soviet Union in 1975, intended to dock with the orbiting Salyut 4 space station, but which failed to achieve orbit due to a serious malfunction during launch...
mission, in which the two crew members had survived. Gregory Jarvis was originally scheduled to fly on the previous shuttle flight (STS-61-C
STS-61-C
-Mission parameters:*Mass:**Orbiter liftoff: **Orbiter landing: **Payload: *Perigee: *Apogee: *Inclination: 28.5°*Period: 91.2 min-Mission background:...
), but was re-assigned to this flight and replaced by Congressman Bill Nelson
Bill Nelson
Clarence William "Bill" Nelson is the senior United States Senator from the state of Florida and a member of the Democratic Party. He is a former U.S. Representative and former Treasurer and Insurance Commissioner of Florida...
.

During the ascent phase, 73 seconds after lift-off, the vehicle experienced a catastrophic structural failure resulting in the loss of crew and vehicle. The Rogers Commission later determined the cause of the accident to have been the failure of an O-ring
O-ring
An O-ring, also known as a packing, or a toric joint, is a mechanical gasket in the shape of a torus; it is a loop of elastomer with a disc-shaped cross-section, designed to be seated in a groove and compressed during assembly between two or more parts, creating a seal at the interface.The O-ring...
seal on Challengers right Solid Rocket Booster (SRB)
Space Shuttle Solid Rocket Booster
The Space Shuttle Solid Rocket Boosters were the pair of large solid rockets used by the United States' NASA Space Shuttle during the first two minutes of powered flight. Together they provided about 83% of liftoff thrust for the Space Shuttle. They were located on either side of the rusty or...
. The failure of the seal allowed a flamethrower-like flare to impinge upon one of two aft SRB attach struts, which eventually failed, freeing the booster to pivot about its remaining attachment points. Subsequently, the forward part of the booster cylinder impacted the external tank (ET) intertank area, leading to a structural failure of the ET—the core structural component of the entire stack. A rapid burning of liberated propellants ensued. With the structural "backbone" of the stack compromised and breaking up, the SRBs flew off on their own, as did the orbiter, which rapidly disintegrated due to overwhelming aerodynamic forces. The launch had been approved despite a predicted ambient temperature of 26 °F (-3.3 °C), well below the qualification limit of major components such as the SRBs, which had been certified for use only at temperatures above 40 °F (4.4 °C). Evidence found in the remnants of the crew cabin showed that several of the emergency air supplies (PEAPs) carried by the astronauts had been manually activated, suggesting that forces experienced inside the cabin during breakup of the orbiter were not inherently fatal, and that at least three crew members were alive and capable of conscious action for some period of time following vehicle breakup. "Tracking reported that the vehicle had exploded and impacted the water in an area approximately located at 28.64 degrees north, 80.28 degrees west", Mission Control, Houston.

On 7 March, divers from the located what they believed to be the crew cabin on the ocean floor. A subsequent dive the following day confirmed that it was the cabin and that the remains of the crew were still inside. No official investigations into the Challenger Disaster have concluded for certain the cause of death of the astronauts; however it is almost certain the actual disintegration did not kill the entire crew, as 3 of the 4 PEAPs (personal egress air packs) that were recovered had been manually activated, which would only be done during an emergency or loss of cabin pressure (although whether cabin pressure was lost is still in debate but considered likely). However, the PEAPs do not provide a pressurized air flow and would still have resulted in the astronauts losing consciousness within several seconds. There were media reports alleging that NASA had a secret tape recording of the crew panicking and on board conversation following the disintegration during the 2 minute 45 second free fall before impacting into the sea east of Florida. This was likely fabricated however and no such recording exists: the crew may have been unconscious from loss of cabin pressure, and the astronauts did not wear individual voice recorders. Also, any such voice recording facility would have been without power, since the breakup of the orbiter immediately separated the crew compartment from the power-generating fuel cells in the back of the vehicle. However, it is certain that the impact of the shuttle with the sea would have killed any still surviving astronauts on board, though they may have died prior to the impact of other causes.

None of the mission objectives were accomplished.

The STS-51-L crew members designed the mission patch
Mission patch
A mission patch is a cloth badge worn by astronauts and other personnel affiliated with a manned or unmanned space mission. A new patch is created for each mission.- Origins :Mission patches were first sported by NASA astronauts in 1965...
seen above to represent their participation in NASA
NASA
The National Aeronautics and Space Administration is the agency of the United States government that is responsible for the nation's civilian space program and for aeronautics and aerospace research...
's mission aboard Challenger, depicted launching from Florida and soaring into space to carry out a variety of goals. Among the prescribed duties of the five astronauts and two payload specialists (represented by the seven stars of the US flag) was observation and photography of Halley's Comet, backdropped against the U.S. flag
Flag of the United States
The national flag of the United States of America consists of thirteen equal horizontal stripes of red alternating with white, with a blue rectangle in the canton bearing fifty small, white, five-pointed stars arranged in nine offset horizontal rows of six stars alternating with rows...
in the insignia. Surnames of the crew members encircle the scene, with the payload specialists being recognized below. Surname of the first teacher in space, Christa McAuliffe
Christa McAuliffe
Christa McAuliffe was an American teacher from Concord, New Hampshire, and was one of the seven crew members killed in the Space Shuttle Challenger disaster....
, is followed by a symbolic apple.