Encyclopedia
STS-91 was the final Space Shuttle
Space Shuttle
The Space Shuttle was a manned orbital rocket and spacecraft system operated by NASA on 135 missions from 1981 to 2011. The system combined rocket launch, orbital spacecraft, and re-entry spaceplane with modular add-ons...
mission to the Mir
Mir
Mir was a space station operated in low Earth orbit from 1986 to 2001, at first by the Soviet Union and then by Russia. Assembled in orbit from 1986 to 1996, Mir was the first modular space station and had a greater mass than that of any previous spacecraft, holding the record for the...
space station. It was flown by Space Shuttle Discovery
Space Shuttle Discovery
Space Shuttle Discovery is one of the retired orbiters of the Space Shuttle program of NASA, the space agency of the United States, and was operational from its maiden flight, STS-41-D on August 30, 1984, until its final landing during STS-133 on March 9, 2011...
, and launched from Kennedy Space Center
Kennedy Space Center
The John F. Kennedy Space Center is the NASA installation that has been the launch site for every United States human space flight since 1968. Although such flights are currently on hiatus, KSC continues to manage and operate unmanned rocket launch facilities for America's civilian space program...
, Florida, on 2 June 1998.

The mission was the first to use the super lightweight external tank (SLWT
Space Shuttle external tank
A Space Shuttle External Tank is the component of the Space Shuttle launch vehicle that contains the liquid hydrogen fuel and liquid oxygen oxidizer. During lift-off and ascent it supplies the fuel and oxidizer under pressure to the three Space Shuttle Main Engines in the orbiter...
) which was the same size, at 154 feet (46.9 m) long and 27 feet (8.2 m) in diameter, as the external tank used on previous launches, but 7500 pounds (3,401.9 kg) lighter. The tank was made of an aluminum lithium alloy and the tank's structural design had also been improved making it 30 percent stronger and 5 percent less dense. The walls of the redesigned hydrogen tank were machined in an orthogonal waffle-like pattern, providing more strength and stability than the previous design. These improvements would later provide additional payload capacity to the International Space Station.

Docking of Discovery to Mir, the first for that orbiter, occurred at 16:01 UTC, 4 June 1998 at an altitude of 208 miles. Hatches opened at 2:34 pm the same day. At hatch opening, Andy Thomas officially became a member of Discovery’s crew, completing 130 days of living and working on Mir. The transfer wrapped up a total of 907 days spent by seven U.S. astronauts aboard the Russia
Russia
Russia or , officially known as both Russia and the Russian Federation , is a country in northern Eurasia. It is a federal semi-presidential republic, comprising 83 federal subjects...
n space station
Space station
A space station is a spacecraft capable of supporting a crew which is designed to remain in space for an extended period of time, and to which other spacecraft can dock. A space station is distinguished from other spacecraft used for human spaceflight by its lack of major propulsion or landing...
as long-duration crew members. During the next four days, the Mir 25 and STS-91 crews transferred more than 500 kilograms (1,102.3 lb) of water, and almost 2130 kilograms (4,695.8 lb) of cargo experiments and supplies were exchanged between the two spacecraft. During this time, long-term U.S. experiments aboard the Mir were moved into Discovery’s middeck locker area and the SPACEHAB single module in the orbiter’s payload bay, including the Space Acceleration Measurement System (SAMS) and the tissue engineering
Tissue engineering
Tissue engineering is the use of a combination of cells, engineering and materials methods, and suitable biochemical and physio-chemical factors to improve or replace biological functions...
co-culture (COCULT) investigations, as well as two crystal growth experiments. The crews also conducted Risk Mitigation Experiments (RMEs) and Human Life Sciences (HLS) investigations. When the hatches closed for undocking at 9:07 am, 8 June, and the spacecraft separated at 12:01 pm that day, the final Shuttle-Mir docking mission was concluded and Phase 1 of the International Space Station (ISS) program came to an end. 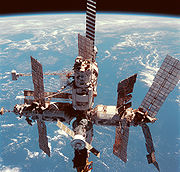 STS-91 also carried a prototype of the Alpha Magnetic Spectrometer
Alpha Magnetic Spectrometer
The Alpha Magnetic Spectrometer, also designated AMS-02, is a particle physics experiment module that is mounted on the International Space Station. It is designed to search for various types of unusual matter by measuring cosmic rays. Its experiments will help researchers study the formation of...
(AMS) into space. The AMS, designed to look for dark and missing matter in the universe, was powered up on Flight Day 1. Data originally planned to be sent to ground stations through Discovery’s KU-band communications system was recorded on board because of a problem with the KU-band system that prevented it from sending high-rate communications, including television signals, to the ground. The system was able to receive uplink transmissions. On 3 June 1998 the crew was able to set up a bypass system that allowed AMS data to be downlinked via S-band/FM communications when the orbiter came within range of a ground station. Data that could not be recorded by ground stations was recorded on board throughout the mission.

The KU-band system failure was determined to be located in a component that was not accessible to the crew. The failure prevented television transmission throughout the mission. Television broadcasts from Mir were prevented by a problem between a Russian ground station and the mission control center outside of Moscow, limiting communications to audio only on NASA television.

Other experiments conducted by the Shuttle crew during the mission included a checkout of the orbiter’s robot arm to evaluate new electronics and software and the Orbiter Space Vision System for use during assembly missions for the ISS. Also on board in the payload bay were eight Get Away Special experiments, while combustion, crystal growth and radiation monitoring experiments were conducted in Discovery’s mid-deck crew cabin area.