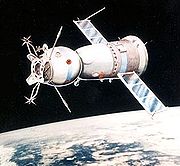 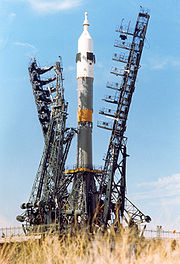 The launch vehicles used in the Soyuz expendable launch system
Expendable launch system
An expendable launch system is a launch system that uses an expendable launch vehicle to carry a payload into space. The vehicles used in expendable launch systems are designed to be used only once , and their components are not recovered for re-use after launch...
are manufactured at the Progress State Research and Production Rocket Space Center
Progress State Research and Production Rocket Space Center
The Progress State Research and Production Space Centre is a Russian "Federal State Unitary Enterprise" under the jurisdiction of Roscosmos, the Russian Federal Space Agency responsible for space science and aerospace research...
(TsSKB-Progress) in Samara, Russia
Samara, Russia
Samara , is the sixth largest city in Russia. It is situated in the southeastern part of European Russia at the confluence of the Volga and Samara Rivers. Samara is the administrative center of Samara Oblast. Population: . The metropolitan area of Samara-Tolyatti-Syzran within Samara Oblast...
. As well as being used in the Soyuz programme as the launcher for the manned Soyuz spacecraft, Soyuz launch vehicles are now also used to launch unmanned Progress supply spacecraft
Progress spacecraft
The Progress is a Russian expendable freighter spacecraft. The spacecraft is an unmanned resupply spacecraft during its flight but upon docking with a space station, it allows astronauts inside, hence it is classified manned by the manufacturer. It was derived from the Soyuz spacecraft, and is...
to the International Space Station
International Space Station
The International Space Station is a habitable, artificial satellite in low Earth orbit. The ISS follows the Salyut, Almaz, Cosmos, Skylab, and Mir space stations, as the 11th space station launched, not including the Genesis I and II prototypes...
and commercial launches marketed and operated by TsSKB-Progress and the Starsem
Starsem
Starsem is a European-Russian company that was created in 1996 to commercialise the Soyuz launcher. Starsem is headquartered in Évry, France and has the following shareholders:* Russian Federal Space Agency...
company. There were 11 Soyuz launches in 2001 and 9 in 2002. Currently Soyuz vehicles are launched from the Baikonur Cosmodrome
Baikonur Cosmodrome
The Baikonur Cosmodrome , also called Tyuratam, is the world's first and largest operational space launch facility. It is located in the desert steppe of Kazakhstan, about east of the Aral Sea, north of the Syr Darya river, near Tyuratam railway station, at 90 meters above sea level...
in Kazakhstan
Kazakhstan
Kazakhstan , officially the Republic of Kazakhstan, is a transcontinental country in Central Asia and Eastern Europe. Ranked as the ninth largest country in the world, it is also the world's largest landlocked country; its territory of is greater than Western Europe...
and the Plesetsk Cosmodrome
Plesetsk Cosmodrome
Plesetsk Cosmodrome is a Russian spaceport, located in Arkhangelsk Oblast, about 800 km north of Moscow and approximately 200 km south of Arkhangelsk.-Overview:...
in northwest Russia
Russia
Russia or , officially known as both Russia and the Russian Federation , is a country in northern Eurasia. It is a federal semi-presidential republic, comprising 83 federal subjects...
and, starting in 2011, Soyuz launch vehicles can now also be launched from the Guiana Space Centre in French Guiana
French Guiana
French Guiana is an overseas region of France, consisting of a single overseas department located on the northern Atlantic coast of South America. It has borders with two nations, Brazil to the east and south, and Suriname to the west...
. The first launch from the Guiana space centre took place on 21 October 2011.

The basic Soyuz spacecraft
Soyuz spacecraft
Soyuz , Union) is a series of spacecraft initially designed for the Soviet space programme by the Korolyov Design Bureau in the 1960s, and still in service today...
design was the basis for many projects, many of which never came to light. Its earliest form was intended to travel to the moon without employing a huge booster like the Saturn V
Saturn V
The Saturn V was an American human-rated expendable rocket used by NASA's Apollo and Skylab programs from 1967 until 1973. A multistage liquid-fueled launch vehicle, NASA launched 13 Saturn Vs from the Kennedy Space Center, Florida with no loss of crew or payload...
or the Soviet N-1
N1 rocket
N-1 was a heavy lift rocket intended to deliver payloads beyond low Earth orbit, acting as the Soviet counterpart to the NASA Saturn V rocket. This heavy lift booster had the capability of lifting very heavy loads into orbit, designed with manned extra-orbital travel in mind...
by repeatedly docking with upper stages that had been put in orbit using the same rocket as the Soyuz. This and the initial civilian designs were done under the Soviet Chief Designer Sergei Pavlovich Korolev, who did not live to see the craft take flight. Several military derivatives took precedence in the Soviet design process, though they never came to pass.

A Soyuz spacecraft consists of three parts (from front to back):

There are several variants of the Soyuz spacecraft, including:

The Zond
Zond program
Zond was the name given to two distinct series of Soviet unmanned space program undertaken from 1964 to 1970. The first series based on 3MV planetary probe was intended to gather information about nearby planets...
spacecraft was another derivative, designed to take a crew traveling in a figure-eight orbit around the Earth and the moon but never achieving the degree of safety or political need to be used for such.

Finally, the Progress
Progress spacecraft
The Progress is a Russian expendable freighter spacecraft. The spacecraft is an unmanned resupply spacecraft during its flight but upon docking with a space station, it allows astronauts inside, hence it is classified manned by the manufacturer. It was derived from the Soyuz spacecraft, and is...
series of unmanned cargo ships for the Salyut
Salyut
The Salyut program was the first space station program undertaken by the Soviet Union, which consisted of a series of nine space stations launched over a period of eleven years from 1971 to 1982...
and Mir
Mir
Mir was a space station operated in low Earth orbit from 1986 to 2001, at first by the Soviet Union and then by Russia. Assembled in orbit from 1986 to 1996, Mir was the first modular space station and had a greater mass than that of any previous spacecraft, holding the record for the...
space laboratories used the automatic navigation and docking mechanism (but not the re-entry capsule) of Soyuz.

As of 2011, Soyuz derivatives provide much of mankind's human spaceflight capability and are used to ferry personnel and supplies to and from the International Space Station
International Space Station
The International Space Station is a habitable, artificial satellite in low Earth orbit. The ISS follows the Salyut, Almaz, Cosmos, Skylab, and Mir space stations, as the 11th space station launched, not including the Genesis I and II prototypes...
. With the retirement of the USA's Space Shuttle
Space Shuttle
The Space Shuttle was a manned orbital rocket and spacecraft system operated by NASA on 135 missions from 1981 to 2011. The system combined rocket launch, orbital spacecraft, and re-entry spaceplane with modular add-ons...
s, Russia will have the sole proven system for boosting crew to the station.

While not a direct derivative, the Chinese
China
Chinese civilization may refer to:* China for more general discussion of the country.* Chinese culture* Greater China, the transnational community of ethnic Chinese.* History of China* Sinosphere, the area historically affected by Chinese culture...
Shenzhou spacecraft
Shenzhou spacecraft
Shenzhou is a spacecraft developed and operated by the People's Republic of China to support its manned spaceflight program. The name is variously translated as "Divine Craft," "Divine Vessel of God," "Magic Boat" or similar and is also homophonous with an ancient name for China...
follows the basic template originally pioneered by Soyuz.