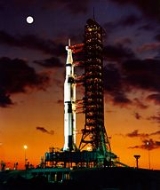 Overview
The Saturn V was an American human-rated expendable
Expendable launch system
An expendable launch system is a launch system that uses an expendable launch vehicle to carry a payload into space. The vehicles used in expendable launch systems are designed to be used only once , and their components are not recovered for re-use after launch...
rocket
Rocket
A rocket is a missile, spacecraft, aircraft or other vehicle which obtains thrust from a rocket engine. In all rockets, the exhaust is formed entirely from propellants carried within the rocket before use. Rocket engines work by action and reaction...
used by NASA
NASA
The National Aeronautics and Space Administration is the agency of the United States government that is responsible for the nation's civilian space program and for aeronautics and aerospace research...
's Apollo and Skylab
Skylab
Skylab was a space station launched and operated by NASA, the space agency of the United States. Skylab orbited the Earth from 1973 to 1979, and included a workshop, a solar observatory, and other systems. It was launched unmanned by a modified Saturn V rocket, with a mass of...
programs from 1967 until 1973. A multistage
Multistage rocket
A multistage rocket is a rocket that usestwo or more stages, each of which contains its own engines and propellant. A tandem or serial stage is mounted on top of another stage; a parallel stage is attached alongside another stage. The result is effectively two or more rockets stacked on top of or...
liquid-fueled launch vehicle
Launch vehicle
In spaceflight, a launch vehicle or carrier rocket is a rocket used to carry a payload from the Earth's surface into outer space. A launch system includes the launch vehicle, the launch pad and other infrastructure....
, NASA launched 13 Saturn Vs from the Kennedy Space Center, Florida
Florida
Florida is a state in the southeastern United States, located on the nation's Atlantic and Gulf coasts. It is bordered to the west by the Gulf of Mexico, to the north by Alabama and Georgia and to the east by the Atlantic Ocean. With a population of 18,801,310 as measured by the 2010 census, it...
with no loss of crew or payload. It remains the tallest, heaviest and most powerful rocket ever brought to operational status and still holds the record for the heaviest launch vehicle payload.

The largest production model of the Saturn family of rockets, the Saturn V was designed under the direction of Wernher von Braun
Wernher von Braun
Wernher Magnus Maximilian, Freiherr von Braun was a German rocket scientist, aerospace engineer, space architect, and one of the leading figures in the development of rocket technology in Nazi Germany during World War II and in the United States after that.A former member of the Nazi party,...
and Arthur Rudolph
Arthur Rudolph
Arthur Louis Hugo Rudolph was a German rocket engineer and member of the Nazi party who played a key role in the development of the V-2 rocket. After World War II he was brought to the United States, subsequently becoming a pioneer of the United States space program. He worked for the U.S...
at the Marshall Space Flight Center
Marshall Space Flight Center
The George C. Marshall Space Flight Center is the U.S. government's civilian rocketry and spacecraft propulsion research center. The largest center of NASA, MSFC's first mission was developing the Saturn launch vehicles for the Apollo moon program...
in Huntsville, Alabama
Huntsville, Alabama
Huntsville is a city located primarily in Madison County in the central part of the far northern region of the U.S. state of Alabama. Huntsville is the county seat of Madison County. The city extends west into neighboring Limestone County. Huntsville's population was 180,105 as of the 2010 Census....
, with Boeing
Boeing
The Boeing Company is an American multinational aerospace and defense corporation, founded in 1916 by William E. Boeing in Seattle, Washington. Boeing has expanded over the years, merging with McDonnell Douglas in 1997. Boeing Corporate headquarters has been in Chicago, Illinois since 2001...
, North American Aviation
North American Aviation
North American Aviation was a major US aerospace manufacturer, responsible for a number of historic aircraft, including the T-6 Texan trainer, the P-51 Mustang fighter, the B-25 Mitchell bomber, the F-86 Sabre jet fighter, the X-15 rocket plane, and the XB-70, as well as Apollo Command and Service...
, Douglas Aircraft Company
Douglas Aircraft Company
The Douglas Aircraft Company was an American aerospace manufacturer, based in Long Beach, California. It was founded in 1921 by Donald Wills Douglas, Sr. and later merged with McDonnell Aircraft in 1967 to form McDonnell Douglas...
, and IBM
IBM
International Business Machines Corporation or IBM is an American multinational technology and consulting corporation headquartered in Armonk, New York, United States. IBM manufactures and sells computer hardware and software, and it offers infrastructure, hosting and consulting services in areas...
as the lead contractors.

Hello. I am writing some rocket engine software and am using the Saturn V, F-1 Engine specs to test the program against. But two specs are missing...
More
x