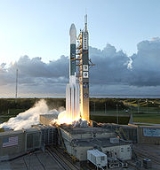 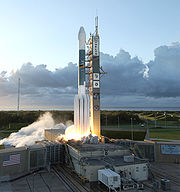 An expendable launch system is a launch system
Launch vehicle
In spaceflight, a launch vehicle or carrier rocket is a rocket used to carry a payload from the Earth's surface into outer space. A launch system includes the launch vehicle, the launch pad and other infrastructure....
that uses an expendable launch vehicle (ELV) to carry a payload into space
Space
Space is the boundless, three-dimensional extent in which objects and events occur and have relative position and direction. Physical space is often conceived in three linear dimensions, although modern physicists usually consider it, with time, to be part of a boundless four-dimensional continuum...
. The vehicles used in expendable launch systems are designed to be used only once (i.e. they are "expended" during a single flight), and their components are not recovered for re-use after launch. The vehicle typically consists of several rocket stages
Multistage rocket
A multistage rocket is a rocket that usestwo or more stages, each of which contains its own engines and propellant. A tandem or serial stage is mounted on top of another stage; a parallel stage is attached alongside another stage. The result is effectively two or more rockets stacked on top of or...
, discarded one by one as the vehicle gains altitude and speed.

Many orbital
Orbital spaceflight
An orbital spaceflight is a spaceflight in which a spacecraft is placed on a trajectory where it could remain in space for at least one orbit. To do this around the Earth, it must be on a free trajectory which has an altitude at perigee above...
expendable launchers are derivatives of 1950s-era ballistic missile
Ballistic missile
A ballistic missile is a missile that follows a sub-orbital ballistic flightpath with the objective of delivering one or more warheads to a predetermined target. The missile is only guided during the relatively brief initial powered phase of flight and its course is subsequently governed by the...
s. Many see this as unfortunate because cost was not a major consideration in their design. A prime example of this is the Titan IV
Titan IV
The Titan IV family of space boosters were used by the U.S. Air Force. They were launched from Cape Canaveral Air Force Station, Florida, and Vandenberg Air Force Base, California. At the time of its introduction, the Titan IV was the "largest unmanned space booster used by the Air Force."The...
, probably the costliest per-unit launch vehicle in history (perhaps following the Space Shuttle).

On the other hand, a reusable launcher such as the Shuttle requires a heavier structure and a recovery system (wings, thermal protection system, wheels, etc.) that reduce payload capacity. The Shuttle additionally carries a crew (though not inherent to a reusable system) whose weight, supplies and life support systems further decrease payload capacity.

A Shuttle orbiter is a major national asset, and its high cost (far more than a single expendable launch vehicle) and presence of a crew require stringent "man rated" flight safety precautions that increase launch and payload costs. Only five orbiters were built, and the unexpected loss of two (Challenger
Space Shuttle Challenger
Space Shuttle Challenger was NASA's second Space Shuttle orbiter to be put into service, Columbia having been the first. The shuttle was built by Rockwell International's Space Transportation Systems Division in Downey, California...
and Columbia
Space Shuttle Columbia
Space Shuttle Columbia was the first spaceworthy Space Shuttle in NASA's orbital fleet. First launched on the STS-1 mission, the first of the Space Shuttle program, it completed 27 missions before being destroyed during re-entry on February 1, 2003 near the end of its 28th, STS-107. All seven crew...
) significantly impacted the capacity and viability of the Shuttle program. Each loss also resulted in an extended hiatus in Shuttle flights compared to that following most expendable launch failures, each of which impacted only that model of launcher.

For these reasons it is generally agreed that the Space Shuttle has not delivered on its original promise to reduce the costs of constructing and launching payloads into orbit. The Shuttle was originally intended to replace expendable launchers in the launching of satellites, but after the loss of Challenger the Shuttle was reserved for previously planned missions and those requiring a crew.

Spacecraft launched by the Shuttle included several TDRSS communications relays heavily used by the Shuttle program itself, a series of commercial communication satellites, and the interplanetary probes Magellan
Magellan probe
The Magellan spacecraft, also referred to as the Venus Radar Mapper, was a 1,035-kilogram robotic space probe launched by NASA on May 4, 1989, to map the surface of Venus using Synthetic Aperture Radar and measure the planetary gravity...
, Galileo and Ulysses. Several classified military payloads were also carried.

On March 26, 1980, the European Space Agency
European Space Agency
The European Space Agency , established in 1975, is an intergovernmental organisation dedicated to the exploration of space, currently with 18 member states...
and the Centre National d'Etudes Spatiales (CNES) created Arianespace
Arianespace
Arianespace SA is a French company founded in 1980 as the world's first commercial space transportation company. It undertakes the production, operation, and marketing of the Ariane 5 rocket launcher as part of the Ariane programme....
, the world's first commercial space transportation company. Arianespace produces, operates and markets the Ariane launcher family. By 1995 Arianespace lofted its 100th satellite
Satellite
In the context of spaceflight, a satellite is an object which has been placed into orbit by human endeavour. Such objects are sometimes called artificial satellites to distinguish them from natural satellites such as the Moon....
and by 1997 the Ariane rocket had its 100th launch. Arianespace's 23 shareholders represent scientific, technical, financial and political entities from 10 different Europe
Europe
Europe is, by convention, one of the world's seven continents. Comprising the westernmost peninsula of Eurasia, Europe is generally 'divided' from Asia to its east by the watershed divides of the Ural and Caucasus Mountains, the Ural River, the Caspian and Black Seas, and the waterways connecting...
an countries. The major shareholder is the CNES, with 34.68% of capital.

From the beginning of the Shuttle program until the Challenger disaster
Space Shuttle Challenger disaster
The Space Shuttle Challenger disaster occurred on January 28, 1986, when Space Shuttle Challenger broke apart 73 seconds into its flight, leading to the deaths of its seven crew members. The spacecraft disintegrated over the Atlantic Ocean, off the coast of central Florida at 11:38 am EST...
in 1986, it was the policy of the United States that NASA be the public-sector provider of U.S. launch capacity to the world market. Initially NASA subsidized satellite launches with the intention of eventually pricing Shuttle service for the commercial market at long-run marginal cost
Marginal cost
In economics and finance, marginal cost is the change in total cost that arises when the quantity produced changes by one unit. That is, it is the cost of producing one more unit of a good...
.

On November 5, 1990, United States President George H. W. Bush
George H. W. Bush
George Herbert Walker Bush is an American politician who served as the 41st President of the United States . He had previously served as the 43rd Vice President of the United States , a congressman, an ambassador, and Director of Central Intelligence.Bush was born in Milton, Massachusetts, to...
signed into law the Launch Services Purchase Act. The Act, in a complete reversal of the earlier Space Shuttle monopoly, ordered NASA to purchase launch services for its primary payloads from commercial providers whenever such services are required in the course of its activities.

The Russian government sold part of its stake in RSC Energia
S.P. Korolev Rocket and Space Corporation Energia
OAO S.P. Korolev Rocket and Space Corporation Energia , also known as RKK Energiya, is a Russian manufacturer of spacecraft and space station components...
to private investors in 1994. Energia together with Khrunichev constituted most of the Russian manned space program. In 1997, the Russian government sold off enough of its share to lose the majority position.

In 1996 the United States government selected Lockheed Martin
Lockheed Martin
Lockheed Martin is an American global aerospace, defense, security, and advanced technology company with worldwide interests. It was formed by the merger of Lockheed Corporation with Martin Marietta in March 1995. It is headquartered in Bethesda, Maryland, in the Washington Metropolitan Area....
and Boeing
Boeing
The Boeing Company is an American multinational aerospace and defense corporation, founded in 1916 by William E. Boeing in Seattle, Washington. Boeing has expanded over the years, merging with McDonnell Douglas in 1997. Boeing Corporate headquarters has been in Chicago, Illinois since 2001...
to each develop Evolved Expendable Launch Vehicles (EELV) to compete for launch contracts and provide assured access to space. The government's acquisition strategy relied on the strong commercial viability of both vehicles to lower unit costs. This anticipated market demand did not materialize, but both the Delta IV and Atlas V
Atlas V
Atlas V is an active expendable launch system in the Atlas rocket family. Atlas V was formerly operated by Lockheed Martin, and is now operated by the Lockheed Martin-Boeing joint venture United Launch Alliance...
EELVs remain in active service.

Since 1995 Khrunichev's Proton rocket is marketed through International Launch Services
International Launch Services
International Launch Services is a U.S.-Russian joint venture with exclusive rights to the worldwide sale of commercial Proton rocket launch services from the Baikonur Cosmodrome in Kazakhstan.- Ownership :...
while the Soyuz rocket is marketed via Starsem
Starsem
Starsem is a European-Russian company that was created in 1996 to commercialise the Soyuz launcher. Starsem is headquartered in Évry, France and has the following shareholders:* Russian Federal Space Agency...
. Energia builds the Soyuz rocket and owns part of the Sea Launch
Sea Launch
Sea Launch is a spacecraft launch service that uses a mobile sea platform for equatorial launches of commercial payloads on specialized Zenit 3SL rockets...
project which flies the Ukrainian Zenit rocket.

In 2003 Arianespace joined with Boeing
Boeing
The Boeing Company is an American multinational aerospace and defense corporation, founded in 1916 by William E. Boeing in Seattle, Washington. Boeing has expanded over the years, merging with McDonnell Douglas in 1997. Boeing Corporate headquarters has been in Chicago, Illinois since 2001...
Launch Services and Mitsubishi Heavy Industries
Mitsubishi Heavy Industries
, or MHI, is a Japanese company. It is one of the core companies of Mitsubishi Group.-History:In 1870 Yataro Iwasaki, the founder of Mitsubishi took a lease of Government-owned Nagasaki Shipyard. He named it Nagasaki Shipyard & Machinery Works, and started the shipbuilding business on a full scale...
to create the Launch Services Alliance
Launch Services Alliance
In July 2003, Arianespace joined with Boeing Launch Services and Mitsubishi Heavy Industries to create the Launch Services Alliance. The flagship launchers for the Launch Services Alliance are Arianespace's Ariane rocket, Boeing's Sea Launch platform and Mitsubishi's H-II A vehicle...
. In 2005, continued weak commercial demand for EELV launches drove Lockheed Martin and Boeing to propose a joint venture called the United Launch Alliance
United Launch Alliance
United Launch Alliance is a joint venture of Lockheed Martin and Boeing. ULA was formed in December 2006 by combining the teams at these companies which provide spacecraft launch services to the government of the United States. U.S...
to monopolize the United States government launch market.