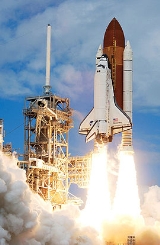 Overview
The Space Shuttle was a manned orbital rocket and spacecraft system operated by NASA on 135 missions from 1981 to 2011. The system combined rocket launch, orbital spacecraft, and re-entry spaceplane
Spaceplane
A spaceplane is a vehicle that operates as an aircraft in Earth's atmosphere, as well as a spacecraft when it is in space. It combines features of an aircraft and a spacecraft, which can be thought of as an aircraft that can endure and maneuver in the vacuum of space or likewise a spacecraft that...
with modular add-ons. Major missions included launching numerous satellites and interplanetary probes, conducting space science experiments, and 37 missions constructing and servicing the International Space Station
International Space Station
The International Space Station is a habitable, artificial satellite in low Earth orbit. The ISS follows the Salyut, Almaz, Cosmos, Skylab, and Mir space stations, as the 11th space station launched, not including the Genesis I and II prototypes...
. A major international contribution was the Spacelab
Spacelab
Spacelab was a reusable laboratory used on certain spaceflights flown by the Space Shuttle. The laboratory consisted of multiple components, including a pressurized module, an unpressurized carrier and other related hardware housed in the Shuttle's cargo bay...
payload suite, from the ESA
European Space Agency
The European Space Agency , established in 1975, is an intergovernmental organisation dedicated to the exploration of space, currently with 18 member states...
.

When launched, what direction is the shuttle going?

Hi new here. I use to work for UTC space.SSMS. Since was laid off in 2000 I have been trying to finish my collection of the space shuttle mission s...

What is the typical "material sandwich" for a space shuttle nose cone? Specifically, I am looking for general information about the materials (skin, i...
More

What is the shuttle?

How does a space shuttle maneuver in the exosphere?

1976    The first Space Shuttle, Enterprise, is unveiled by NASA.

1979    The first fully functional space shuttle orbiter, ''Columbia'', is delivered to the John F. Kennedy Space Center to be prepared for its first launch.

1982    NASA's Space Shuttle ''Columbia'', is launched from the Kennedy Space Center on its third mission, STS-3.

1984    Marc Garneau becomes the first Canadian in space, aboard the Space Shuttle ''Challenger''.

1988    The PEPCON disaster rocks Henderson, Nevada, as tons of space shuttle fuel detonates during a fire.