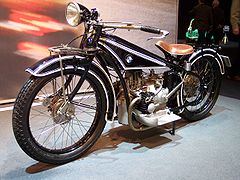 The following outline is provided as an overview of motorcycles and motorcycling:

Motorcycle
Motorcycle
A motorcycle is a single-track, two-wheeled motor vehicle. Motorcycles vary considerably depending on the task for which they are designed, such as long distance travel, navigating congested urban traffic, cruising, sport and racing, or off-road conditions.Motorcycles are one of the most...
– single-track, engine-powered
Single-track vehicle
A single-track vehicle is a vehicle that leaves a single ground track as it moves forward. Single-track vehicles usually have little or no lateral stability when stationary but develop it when moving forward or controlled...
, two-wheeled motor vehicle
Motor vehicle
A motor vehicle or road vehicle is a self-propelled wheeled vehicle that does not operate on rails, such as trains or trolleys. The vehicle propulsion is provided by an engine or motor, usually by an internal combustion engine, or an electric motor, or some combination of the two, such as hybrid...
. It is also called a motorbike, bike, or cycle.

Motorcycle design depends on the purpose for which they are used. The main types of motorcycle include:


Parts of a motorcycle

First motorcycle ride – it is generally accepted that the first motorcycle ride was by Gottlieb Daimler's
Gottlieb Daimler
Gottlieb Daimler was an engineer, industrial designer and industrialist born in Schorndorf , in what is now Germany. He was a pioneer of internal-combustion engines and automobile development...
son Paul on a new machine called 'Einspur' (One track) near Stuttgart
Stuttgart
Stuttgart is the capital of the state of Baden-Württemberg in southern Germany. The sixth-largest city in Germany, Stuttgart has a population of 600,038 while the metropolitan area has a population of 5.3 million ....
in Germany
Germany
Germany , officially the Federal Republic of Germany , is a federal parliamentary republic in Europe. The country consists of 16 states while the capital and largest city is Berlin. Germany covers an area of 357,021 km2 and has a largely temperate seasonal climate...
on 10 November 1885. Daimler followed many pioneering engineers and inventors, and many more followed him, including:

There are a number of museums which feature collections of motorcycles, either as part of a larger exhibition of vehicles, or dedicated entirely to motorcycles as in the list below:

Riders have raced motorcycles for over a hundred years, with the first official competition recorded as the race from Paris
Paris
Paris is the capital and largest city in France, situated on the river Seine, in northern France, at the heart of the Île-de-France region...
to Rouen
Rouen
Rouen , in northern France on the River Seine, is the capital of the Haute-Normandie region and the historic capital city of Normandy. Once one of the largest and most prosperous cities of medieval Europe , it was the seat of the Exchequer of Normandy in the Middle Ages...
in July 1894. This was quickly followed by races all over Europe and the US. In 1907 the Isle of Man TT
Isle of Man TT
The International Isle of Man TT Race is a motorcycle racing event held on the Isle of Man and was for many years the most prestigious motorcycle race in the world...
races took over 66 kilometres (41 mi) of the island's roads and has continued since. Motorcycle sport now takes many different forms, including:

Motorcycle racing is a motorcycle sport involving racing
Racing
A sport race is a competition of speed, against an objective criterion, usually a clock or to a specific point. The competitors in a race try to complete a given task in the shortest amount of time...
motorcycles. Types of motorcycle racing include:

Although motorcycling can be a solitary form of transport, there are clubs for almost every aspect, including charities, social clubs, criminal or outlaw clubs, lobby groups that guard against restrictive legislation, and specialist clubs for specific makes or types of motorcycle. Examples include:


Motorcycling in the media

Motorcycle television programmes, both drama and documentary, include:


Notable books about motorcycling include: