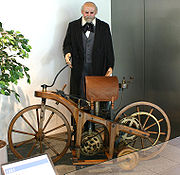 A motorcycle saddle is a term for a motorcycle seat in some parts of the world. It is a seat for carrying a rider and, possibly, a passenger, and which is attached to a motorcycle
Motorcycle
A motorcycle is a single-track, two-wheeled motor vehicle. Motorcycles vary considerably depending on the task for which they are designed, such as long distance travel, navigating congested urban traffic, cruising, sport and racing, or off-road conditions.Motorcycles are one of the most...
often but not exclusively, behind the fuel tank.

There are several types of saddles used on motorcycles. Most common is the "dual saddle" or "benchseat" which is used on the majority of motorcycles today. It allows both the rider and passenger to be seating fore and aft on a single saddle.

Dual saddles, that is two separate saddles (and often independently sprung), are less common today, but were used extensively early in the 20th century.

A recent innovation combines the two, as seen to the right on the R1200RT, where there are two saddles but they are installed adjacent to each other.