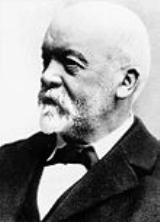 Overview
Gottlieb Daimler (ˈɡɔtliːp ˈdaɪmlɐ; March 17, 1834 – March 6, 1900) was an engineer
Engineer
An engineer is a professional practitioner of engineering, concerned with applying scientific knowledge, mathematics and ingenuity to develop solutions for technical problems. Engineers design materials, structures, machines and systems while considering the limitations imposed by practicality,...
, industrial design
Industrial design
Industrial design is the use of a combination of applied art and applied science to improve the aesthetics, ergonomics, and usability of a product, but it may also be used to improve the product's marketability and production...
er and industrialist born in Schorndorf
Schorndorf
Schorndorf is a town in Baden-Württemberg, Germany, located c. 26 km east of Stuttgart. Its station is a the terminus of line S2 of the Stuttgart S-Bahn....
(Kingdom of Württemberg
Württemberg
Württemberg , formerly known as Wirtemberg or Wurtemberg, is an area and a former state in southwestern Germany, including parts of the regions Swabia and Franconia....
, a federal state of the German Confederation
German Confederation
The German Confederation was the loose association of Central European states created by the Congress of Vienna in 1815 to coordinate the economies of separate German-speaking countries. It acted as a buffer between the powerful states of Austria and Prussia...
), in what is now Germany. He was a pioneer of internal-combustion engines and automobile
Automobile
An automobile, autocar, motor car or car is a wheeled motor vehicle used for transporting passengers, which also carries its own engine or motor...
development. He invented the high-speed petrol engine
Petrol engine
A petrol engine is an internal combustion engine with spark-ignition, designed to run on petrol and similar volatile fuels....
and the first four-wheel automobile.

What are three facts about the gas powered motorcycle
More
x