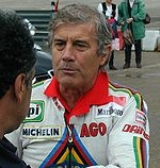 Like John Surtees
John Surtees
John Surtees, OBE is a British former Grand Prix motorcycle road racer and Formula One driver from England. He was 500cc motorcycle World Champion in 1956 and 1958–60, Formula One World Champion in 1964, and remains the only person to have won World Championships on both two and four wheels...
and Mike Hailwood
Mike Hailwood
Stanley Michael Bailey Hailwood, MBE, GM was a British Grand Prix motorcycle road racer regarded by many as one of the greatest racers of all time. He was known as "Mike The Bike" because of his natural riding ability...
before him, Agostini raced in Formula One
Formula One
Formula One, also known as Formula 1 or F1 and referred to officially as the FIA Formula One World Championship, is the highest class of single seater auto racing sanctioned by the Fédération Internationale de l'Automobile . The "formula" designation in the name refers to a set of rules with which...
cars. He competed in non-championship Formula One races in 1978. He competed in the European Formula 2 series in a Chevron B42-BMW
BMW in motorsport
Throughout its history, BMW cars and motorcycles have been successful in a range of motorsport activities. Mainly before World War II, BMW motorcycles were winning e.g. at the Isle of Man TT. Apart from the factory efforts, many privateer teams enter BMW road cars in Touring car racing. BMW also...
and British Aurora Formula 1
British Formula One Series
The British Formula One Series, often abbreviated to British F1, was a Formula One motor racing championship held in the United Kingdom. It was often referred to as the Aurora AFX Formula One series due to the Aurora company's sponsorship of the series for three of the four seasons.The long...
with his own team and a Williams
WilliamsF1
Williams Grand Prix Engineering Limited, trading as AT&T Williams, is a British Formula One motor racing team and constructor. It was founded and run by Sir Frank Williams and Patrick Head...
FW06. He ended his auto racing career in 1980.

In 1982, Ago returned to the motorcycle racing as the Marlboro Yamaha
Yamaha Motor Company
, is a Japanese motorized vehicle-producing company. Yamaha Motor is part of Yamaha Corporation and its headquarter is located in Iwata, Shizuoka. Along with expanding Yamaha Corporation into the world's biggest piano maker, then Yamaha CEO Genichi Kawakami took Yamaha into the field of motorized...
team manager. As team manager he managed many successful riders including Kenny Roberts
Kenny Roberts
Kenneth Leroy Roberts is a former motorcycle racer and racing team owner. In 1978, he became the first American to win a Grand Prix motorcycle racing world championship. He was also a two-time winner of the A.M.A. Grand National Championship...
, and Eddie Lawson
Eddie Lawson
Eddie Lawson is a former four-time Grand Prix motorcycle racing World Champion. His penchant for not crashing & consistently finishing in the points earned him the nickname "Steady Eddie".-Biography:...
. He also served as the Cagiva
Cagiva
Cagiva is an Italian motorcycle manufacturer. It was founded in 1950 by Giovanni Castiglioni in Varese, originally producing small metal components. It went into the motorcycle industry in 1978. The name is a portmanteau derived from the founder and the founding location, i.e. CAstiglioni GIovanni...
race team manager in 1992
1992 Grand Prix motorcycle racing season
The 1992 Grand Prix motorcycle racing season was the 44th F.I.M. Road Racing World Championship season.-Season summary:1992 was a year marked by injuries to several riders, most notably Mick Doohan. The Rothmans Honda rider had won five of the first seven races and seemed ready to win his first...
.