Mopeds are a type of low-powered motorcycle
Motorcycle
A motorcycle is a single-track, two-wheeled motor vehicle. Motorcycles vary considerably depending on the task for which they are designed, such as long distance travel, navigating congested urban traffic, cruising, sport and racing, or off-road conditions.Motorcycles are one of the most...
designed to provide economical and relatively safe transport with minimal licensing requirements.

Mopeds were once all equipped with bicycle-like pedals
Bicycle pedal
A bicycle pedal is the part of a bicycle that the rider pushes with their foot to propel the bicycle. It provides the connection between the cyclist's foot or shoe and the crank allowing the leg to turn the bottom bracket spindle and propel the bicycle's wheels...
(the source of the term, motor + pedal), but moped has been increasingly applied by governments to vehicles without pedals, based on their restricted engine displacement
Engine displacement
Engine displacement is the volume swept by all the pistons inside the cylinders of an internal combustion engine in a single movement from top dead centre to bottom dead centre . It is commonly specified in cubic centimeters , litres , or cubic inches...
, speed, and/or power output. Mopeds occasionally resemble powered bicycles, but most are now step-through designs (of both kinds, having either large or small wheels) and step-over designs similar to a regular motorcycle. Although mopeds usually have two wheels, in some jurisdictions low-powered three
Three wheeler
A three wheeler is a vehicle with three wheels, either "human or people-powered vehicles" or motorized vehicles in the form of a motorcycle, All terrain vehicle or automobile. Other names for three-wheelers include Trikes, Tricars and Cyclecars...
or four wheeled vehicles are also classified as mopeds.

The term "moped" now only applies to low-power (often super-economy) vehicles, but pedals were fitted to some early motorcycles, such as the pictured 1912 Douglas. Pedalling away from stationary was a great improvement over "run and jump" and light pedal assistance (LPA) was valuable for climbing hills. Better transmissions with wider ranges, better clutches and much better engine performance made pedals obsolete on most motorcycles by 1918 but the pedals on mopeds remained valuable for their original purposes as late as the 1990s. 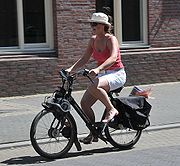 The earliest mopeds were bicycle
Bicycle
A bicycle, also known as a bike, pushbike or cycle, is a human-powered, pedal-driven, single-track vehicle, having two wheels attached to a frame, one behind the other. A person who rides a bicycle is called a cyclist, or bicyclist....
s with a helper motor in various locations, for example on top of the front wheel; they were also called cyclemotors. An example of that type is the VéloSoleX
VéloSoleX
VéloSoleX is a moped, or motorised bicycle, which was originally produced by the French manufacturer Solex, based in Paris, France. The company manufactured centrifugal radiators, carburetors, and micrometers, before branching into assist motors and bicycles...
brand, which simply has a roller driving the front tire.

A more innovative design was known in the UK as the Cyclemaster. This had a complete powered rear wheel which was simply substituted for the bicycle rear wheel, which originated from a design by two DKW engineers in Germany. Slightly larger machines, commonly with a 98 cc engine were known as autocycles. On the other hand some mopeds, such as the Czech-made Jawa
Jawa Motors
Jawa is a motorcycle manufacturer in the Czech republic, formerly Czechoslovakia. The name was created after its founder, Frantisek Janecek, bought the motorcycle division of Wanderer in 1929 , by concatenating the first letters of Janeček and Wanderer...
, were derived from motorcycles.

A further category of low-powered two-wheelers exists today in some jurisdictions for bicycles with helper motors – these are often defined as power-assisted bicycles or motorized bicycles. Other jurisdictions may categorize the same machines as mopeds, creating a certain amount of confusion. In many countries three wheeler
Three wheeler
A three wheeler is a vehicle with three wheels, either "human or people-powered vehicles" or motorized vehicles in the form of a motorcycle, All terrain vehicle or automobile. Other names for three-wheelers include Trikes, Tricars and Cyclecars...
s and microcar
Microcar
A microcar is the smallest automobile classification usually applied to standard small car . Such small cars were generally referred to as cyclecars until the 1940s. More recent models are also called bubblecars due to their egg-shaped appearance.-Definition:The definition of a microcar has varied...
s are classified as mopeds or variations thereof. This practise is not restricted to the third-world, France and Belgium classify microcars such as the Aixam
Aixam
Aixam - Mega is a French automobile manufacturer based in Aix-les-Bains, Savoie. It was founded in 1983 to make microcars in the old Arola factory after that company failed.-History:...
similarly or as "light quadricycles".

The word moped was coined by Swedish journalist Harald Nielsen in 1952, as a portmanteau of motor and pedal. It is however often claimed to be derived from "motorvelociped", as Velocipede
Velocipede
Velocipede is an umbrella term for any human-powered land vehicle with one or more wheels. The most common type of velocipede today is the bicycle....
is an obsolete term for bicycle that is still being used in some languages such as Russia
Russia
Russia or , officially known as both Russia and the Russian Federation , is a country in northern Eurasia. It is a federal semi-presidential republic, comprising 83 federal subjects...
n. According to Douglas Harper
Douglas Harper
Douglas Harper is a historian, author, journalist and lecturer based in Lancaster, Pennsylvania, United States. He earned a degree in history and English from Dickinson College in Carlisle, Pennsylvania....
, the Swedish terms originated from "(trampcykel med) mo(tor och) ped(aler)", which means "pedal cycle with engine and pedals" (the earliest versions had auxiliary pedals).

Other terms used for low-powered cycles include motorbicycle, motorized bicycle, motor-driven cycle, and goped (motorized inline skateboard with T-bar). In German, the terms Mofa (from Motor-Fahrrad, "motor-bicycle") and Mokick (equipped with kick-start) are also used. In Finnish, the common term is mopo (from moottoripolkupyörä, "motor-powered bicycle"). The term noped is sometimes used for mopeds that do not have pedals.

Safely riding a moped mostly requires the same considerations as safely riding a motorcycle
Motorcycle safety
Motorcycle safety concerns many aspects of vehicle and equipment design as well as operator skill and training that are unique to motorcycle riding.-Accident rates:...
but the lower speeds, while reducing some dangers, increases others. The biggest danger is that other traffic may not notice the presence of a moped - bright clothes and reflective fittings help. Drivers may even see the moped, recognize it as harmless to them and simply forget it's there, pulling out of side-turnings into its path. Similarly, a car approaching a moped from behind will approach it more quickly than the driver expects, and the driver's attention may be more attuned to other automobile traffic rather than the moped, increasing the likelihood of an accident. This is a particular problem for mopeds used on high-speed roads where they may not be intended to travel.

Mopeds are often illegally tuned
Engine tuning
Engine tuning is the adjustment, modification or design of internal combustion engines to yield optimal performance, to increase an engine's power output, economy, or durability....
for higher speeds, powers or engine displacements than allowed. For this to be legal, such vehicles should be re-registered as motorcycles, and their driver's license requirements, insurance costs and minimum driver age would be higher. A tuned vehicle, not designed for higher speeds, is not as safe as a purpose-designed motorcycle. A survey of Finnish high school students found that 80% and 70% of their mopeds were tuned, for vocational and gymnasium
Gymnasium (school)
A gymnasium is a type of school providing secondary education in some parts of Europe, comparable to English grammar schools or sixth form colleges and U.S. college preparatory high schools. The word γυμνάσιον was used in Ancient Greece, meaning a locality for both physical and intellectual...
students, respectively. Only 10% of trade school students had a moped to conformed to legistlation. The average maximum speed was 72 km/h, far higher than the legally allowable 45 km/h.

The wide availability of previously-used but still functional small motorcycles in western societies enables and encourages cheap forms of racing, wrongly called moped racing. Dirt-racing forms of this sport is sometimes staged in the stadiums of agricultural show
Agricultural show
An agricultural show is a public event showcasing the equipment, animals, sports and recreation associated with agriculture and animal husbandry. The largest comprise a livestock show , a trade fair, competitions, and entertainment...
s, where, unlike football and athletic grounds, the surface is not too important. One popular series uses chicanes consisting of stacked large-diameter tractor tyres and requires a team of riders, each doing ten laps and then pulling into the middle of the ring for change-over. Two heats and a final, each lasting 25 minutes, can be held in one day interspersed with speedway racing and other displays. Another series once held on full-size race-tracks, including Le Mans
Le Mans
Le Mans is a city in France, located on the Sarthe River. Traditionally the capital of the province of Maine, it is now the capital of the Sarthe department and the seat of the Roman Catholic diocese of Le Mans. Le Mans is a part of the Pays de la Loire region.Its inhabitants are called Manceaux...
, ran for 25 hours (typically 3.00pm one day until 4.00pm the next) and was billed as "the longest race in the world".