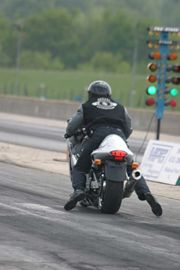 Motorcycle drag racing (also known as "Sprints") involves two participants lining up at a dragstrip
Dragstrip
A dragstrip is a facility for conducting automobile and motorcycle acceleration events such as drag racing. Although a quarter mile is the best known measure for a drag track, many tracks are eighth mile tracks...
with a signaled starting line. Upon the starting signal, the riders accelerate down a quarter mile long, two lane, straight paved track where their elapsed time and terminal speed are recorded. The rider to reach the finish line first is the winner. The most well-known form of motorcycle drag racing is the Pro Stock Bike category, although several other categories exist, including 1000 hp nitromethane engine.