The Romans dedicated this day to Janus
Janus
-General:*Janus , the two-faced Roman god of gates, doors, doorways, beginnings, and endings*Janus , a moon of Saturn*Janus Patera, a shallow volcanic crater on Io, a moon of Jupiter...
, the god of gates, doors, and beginnings. The month of January was named after Janus, who had two faces, one looking forward and the other looking backward. This suggests that New Year's celebrations are founded on pagan traditions. Some have suggested this occurred in 153 BC
153 BC
Year 153 BC was a year of the pre-Julian Roman calendar. At the time it was known as the Year of the Consulship of Nobilior and Luscus...
, when it was stipulated that the two annual consul
Consul
Consul was the highest elected office of the Roman Republic and an appointive office under the Empire. The title was also used in other city states and also revived in modern states, notably in the First French Republic...
s (after whose names the years were identified) entered into office on that day, though no consensus exists on the matter. Dates in March, coinciding with the spring equinox, or commemorating the Annunciation
Annunciation
The Annunciation, also referred to as the Annunciation to the Blessed Virgin Mary or Annunciation of the Lord, is the Christian celebration of the announcement by the angel Gabriel to Virgin Mary, that she would conceive and become the mother of Jesus the Son of God. Gabriel told Mary to name her...
of Jesus
Jesus
Jesus of Nazareth , commonly referred to as Jesus Christ or simply as Jesus or Christ, is the central figure of Christianity...
, along with a variety of Christian feast dates were used throughout the Middle Ages
Middle Ages
The Middle Ages is a periodization of European history from the 5th century to the 15th century. The Middle Ages follows the fall of the Western Roman Empire in 476 and precedes the Early Modern Era. It is the middle period of a three-period division of Western history: Classic, Medieval and Modern...
, though calendars often continued to display the months in columns running from January to December.

Among the 7th century pagans of Flanders
Flanders
Flanders is the community of the Flemings but also one of the institutions in Belgium, and a geographical region located in parts of present-day Belgium, France and the Netherlands. "Flanders" can also refer to the northern part of Belgium that contains Brussels, Bruges, Ghent and Antwerp...
and the Netherlands
Netherlands
The Netherlands is a constituent country of the Kingdom of the Netherlands, located mainly in North-West Europe and with several islands in the Caribbean. Mainland Netherlands borders the North Sea to the north and west, Belgium to the south, and Germany to the east, and shares maritime borders...
, it was the custom to exchange gifts at the New Year. This was a pagan custom deplored by Saint Eligius
Saint Eligius
Saint Eligius is the patron saint of goldsmiths, other metalworkers, and coin collectors. He is also the patron saint of the Royal Electrical and Mechanical Engineers , a corps of the British Army, but he is best known for being the patron saint of horses and those who work with them...
(died 659 or 660), who warned the Flemings and Dutchmen, "(Do not) make vetulas, [little figures of the Old Woman], little deer or iotticos or set tables [for the house-elf, compare Puck
Puck (mythology)
In English folklore, Puck is a mythological fairy or mischievous nature sprite. Puck is also a generalised personification of land spirits. In more recent times, the figure of Robin Goodfellow is identified as a puck.-Etymology:...
] at night or exchange New Year gifts or supply superfluous drinks [another Yule
Yule
Yule or Yuletide is a winter festival that was initially celebrated by the historical Germanic people as a pagan religious festival, though it was later absorbed into, and equated with, the Christian festival of Christmas. The festival was originally celebrated from late December to early January...
custom]." The quote is from the vita of Eligius written by his companion, Ouen.


New Year's Days in other calendars 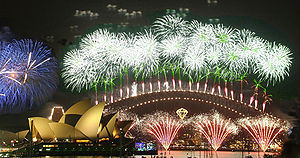 January 1 represents the fresh start of a new year after a period of remembrance of the passing year, including on radio, television and in newspapers, which starts in early December in countries around the world. Publications have year-end articles that review the changes during the previous year. There are also articles on planned or expected changes in the coming year.

This day is traditionally a religious feast
Religious festival
A religious festival is a time of special importance marked by adherents to that religion. Religious festivals are commonly celebrated on recurring cycles in a calendar year or lunar calendar...
, but since the 1900s has become an occasion to celebrate the night of December 31, called New Year's Eve
New Year's Eve
New Year's Eve is observed annually on December 31, the final day of any given year in the Gregorian calendar. In modern societies, New Year's Eve is often celebrated at social gatherings, during which participants dance, eat, consume alcoholic beverages, and watch or light fireworks to mark the...
. There are fireworks
Fireworks
Fireworks are a class of explosive pyrotechnic devices used for aesthetic and entertainment purposes. The most common use of a firework is as part of a fireworks display. A fireworks event is a display of the effects produced by firework devices...
at midnight at the moment the new year arrives.

The celebrations held world-wide on January 1 as part of New Year's Day commonly include the following:

In Brittany
Brittany
Brittany is a cultural and administrative region in the north-west of France. Previously a kingdom and then a duchy, Brittany was united to the Kingdom of France in 1532 as a province. Brittany has also been referred to as Less, Lesser or Little Britain...
, a common image used is that of an incarnation of Father Time
Father Time
Father Time is usually depicted as an elderly bearded man, somewhat worse for wear, dressed in a robe, carrying a scythe and an hourglass or other timekeeping device...
(or the "Old Year") wearing a sash across his chest with the previous year printed on it passing on his duties to the Baby New Year
Baby New Year
The Baby New Year is a personification of the start of the New Year commonly seen in editorial cartoons. He symbolizes the "birth" of the next year, and that the "old" year is gone; in other words, a "rebirth"...
(or the "New Year"), an infant wearing a sash with the new year printed on it.

People born on New Year's Day are commonly called New Year babies. Hospitals, such as the Dyersburg Regional Medical Center in the U.S., give out prizes to the first baby born in that hospital in the new year. These prizes are often donated by local businesses. Prizes may include various baby related items such as baby formula
Infant formula
Infant formula is a manufactured food designed and marketed for feeding to babies and infants under 12 months of age, usually prepared for bottle-feeding or cup-feeding from powder or liquid . The U.S...
, baby blanket
Blanket
A blanket is a type of bedding, generally speaking, a large piece of cloth, intended to keep the user warm, especially while sleeping. Blankets are distinguished from sheets by their thickness and purpose; the thickest sheet is still thinner than the lightest blanket. Blankets are generally used...
s, diaper
Diaper
A nappy or a diaper is a kind of pant that allows one to defecate or urinate on oneself discreetly. When diapers become soiled, they require changing; this process is often performed by a second person such as a parent or caregiver...
s, and gift certificates to stores which specialize in baby related merchandise.


Other celebrations on January 1

Some churches celebrate the Feast of the Circumcision of Christ on January 1, based on the belief that if Jesus was born on December 25, then according to Jewish tradition, his circumcision
Circumcision
Male circumcision is the surgical removal of some or all of the foreskin from the penis. The word "circumcision" comes from Latin and ....
would have taken place on the eighth day of his life (January 1). The Catholic Church now calls this holy day of obligation
Holy Day of Obligation
In the Catholic Church, Holy Days of Obligation or Holidays of Obligation, less commonly called Feasts of Precept, are the days on which, as of the Code of Canon Law states,-Eastern Catholic Churches:...
the Solemnity of Mary, Mother of God.