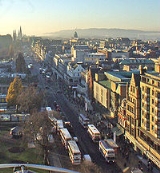 Encyclopedia
Princes Street is one of the major thoroughfares in central Edinburgh
Edinburgh
Edinburgh is the capital city of Scotland, the second largest city in Scotland, and the eighth most populous in the United Kingdom. The City of Edinburgh Council governs one of Scotland's 32 local government council areas. The council area includes urban Edinburgh and a rural area...
, Scotland
Scotland
Scotland is a country that is part of the United Kingdom. Occupying the northern third of the island of Great Britain, it shares a border with England to the south and is bounded by the North Sea to the east, the Atlantic Ocean to the north and west, and the North Channel and Irish Sea to the...
, UK, and its main shopping street. It is the southernmost street of Edinburgh's New Town
New Town, Edinburgh
The New Town is a central area of Edinburgh, the capital of Scotland. It is often considered to be a masterpiece of city planning, and is a UNESCO World Heritage Site...
, stretching around 1 mile (1.6 km) from Lothian Road in the west to Leith Street in the east. The street is mostly closed to private cars, with public transport
Public transport
Public transport is a shared passenger transportation service which is available for use by the general public, as distinct from modes such as taxicab, car pooling or hired buses which are not shared by strangers without private arrangement.Public transport modes include buses, trolleybuses, trams...
given priority. The street has virtually no buildings on the south side, allowing panoramic views of the Old Town
Old Town, Edinburgh
The Old Town of Edinburgh, the capital of Scotland, is the medieval part of the city. Together with the 18th-century New Town, it is a UNESCO World Heritage Site. It has preserved its medieval plan and many Reformation-era buildings....
, Edinburgh Castle
Edinburgh Castle
Edinburgh Castle is a fortress which dominates the skyline of the city of Edinburgh, Scotland, from its position atop the volcanic Castle Rock. Human habitation of the site is dated back as far as the 9th century BC, although the nature of early settlement is unclear...
, and the valley between.

It was laid out according to formal plans for Edinburgh's New Town, now known as the First New Town. These were devised by the architect James Craig
James Craig (architect)
James Craig was a Scottish architect. His brief career was concentrated almost entirely in Edinburgh, and he is remembered primarily for his layout of the first Edinburgh New Town.-Date of birth:...
and building began around 1760. Princes Street represented a critical part of the plan, being the outer edge, facing Edinburgh Castle
Edinburgh Castle
Edinburgh Castle is a fortress which dominates the skyline of the city of Edinburgh, Scotland, from its position atop the volcanic Castle Rock. Human habitation of the site is dated back as far as the 9th century BC, although the nature of early settlement is unclear...
and the original city:"Edinburgh Old Town". Originally all buildings had the same format: set back from the street with stairs down to a basement and stairs up to the ground floor. Heights were generally three storeys plus an attic. Of this original format only one such property remains in its original form. Through the 19th century most buildings were redeveloped at a larger scale and the street evolved from residential to mainly retail uses. In the 1960s a "Princes Street Plan" was proposed, removing all buildings and replacing them with a pro-forma pattern building with first level walkway, theoretically doubling the shopping frontage. The plan was partially put into operation, resulting in a very mixed character to the street. Ironically several of the new buildings, executed in a brutalist style, are now listed buildings.

During the construction of the New Town, the polluted waters of the Nor Loch
Nor Loch
The Nor Loch, also known as the Nor' Loch and the North Loch, was a loch formerly in Edinburgh, Scotland, in the area now occupied by Princes Street Gardens, which lies between the Royal Mile and Princes Street.- Geological formation :...
were drained, and the area was converted into private gardens called Princes Street Gardens
Princes Street Gardens
Princes Street Gardens is a public park in the centre of Edinburgh, Scotland, in the shadow of Edinburgh Castle. The Gardens were created in the 1820s following the long draining of the Nor Loch and the creation of the New Town. The Nor Loch was a large loch in the centre of the city. It was...
. This was taken over by the Edinburgh Council in the late 19th century, by which time most of the street was commercial and there was no great need for private residential gardens. The width of Princes Street was greatly increased soon after, onto what was the northern edge of the gardens. Due to the much lower position of the gardens this led to the creation of the steep embankment on the north side, still visible today. The gardens are one of the many green spaces in the heart of Edinburgh.

The wider George Street
George Street, Edinburgh
Situated to the north of Princes Street, George Street is a major street in the centre of Edinburgh, the capital of Scotland. Laid out from 1767 as part of James Craig's plan for the New Town, George Street was named in honour of King George III.-Geography:...
(parallel to Princes Street) was originally intended to be the main commercial street and major thoroughfare, but its neighbour to the south overtook it due to its breathtaking views over the Gardens and to the Old Town. Ironically, in recent years this commercial superiority is beginning to materialise.


Princes Street Gardens and south side

The Gardens contain the Ross Bandstand (an open-air theatre), a war memorial
War memorial
A war memorial is a building, monument, statue or other edifice to celebrate a war or victory, or to commemorate those who died or were injured in war.-Historic usage:...
to U.S. soldiers of Scottish descent and a floral clock
Floral clock
A floral clock or flower clock is a large decorative clock set into a flower bed in a park or other public recreation area.The floral clock was a form of carpet bedding set onto an operational clock-face, invented in 1903 by John McHattie of Edinburgh Parks in Princes Street Gardens, Edinburgh and...
, together with other attractions. Two of the main Scottish art galleries, the Royal Scottish Academy
Royal Scottish Academy Building
The Royal Scottish Academy Building, situated in the centre of Edinburgh, was designed by William Henry Playfair during the 19th century. Along with the adjacent National Gallery of Scotland, their neo-classical design helped transform Edinburgh in to a modern day Athens of the North.The building...
and the National Gallery of Scotland
National Gallery of Scotland
The National Gallery of Scotland, in Edinburgh, is the national art gallery of Scotland. An elaborate neoclassical edifice, it stands on The Mound, between the two sections of Edinburgh's Princes Street Gardens...
, are located at the foot of The Mound
The Mound
The Mound is an artificial hill in central Edinburgh, Scotland, which connects Edinburgh's New Town and Old Town. It was formed by dumping around 1,501,000 cartloads of earth excavated from the foundations of the New Town into the drained Nor Loch which forms today's Princes Street Gardens. The...
. Further along is the Scott Monument
Scott Monument
The Scott Monument is a Victorian Gothic monument to Scottish author Sir Walter Scott . It stands in Princes Street Gardens in Edinburgh, opposite the Jenners department store on Princes Street and near to Edinburgh Waverley Railway Station.The tower is high, and has a series of viewing decks...
, a huge intricate Gothic monument dedicated to Sir Walter Scott, the author of the Waverley Novels
Waverley Novels
The Waverley Novels are a long series of books by Sir Walter Scott. For nearly a century they were among the most popular and widely-read novels in all of Europe. Because he did not publicly acknowledge authorship until 1827, they take their name from Waverley , which was the first...
, after which is named Waverley station
Edinburgh Waverley railway station
Edinburgh Waverley railway station is the main railway station in the Scottish capital Edinburgh. Covering an area of over 25 acres in the centre of the city, it is the second-largest main line railway station in the United Kingdom in terms of area, the largest being...
, which lies at the east end of the Gardens, its westward lines dividing them. Next to the station on its north side is the former railway hotel, previously known as the North British Hotel, latterly renamed the Balmoral Hotel
Balmoral Hotel
The Balmoral is a luxury five-star hotel and landmark in Edinburgh, Scotland, known as the North British Hotel until the late 1980s. It is located in the heart of the city at the east end of Princes Street, the main shopping street beneath the Edinburgh Castle rock, and the southern edge of the New...
, and the North Bridge
North Bridge, Edinburgh
North Bridge is a road bridge and street in Edinburgh linking the High Street with Princes Street, and the New Town with the Old. The current bridge was built between 1894–97. A previous North Bridge, built from 1763–72, stood until 1896....
which sails at high level over the station. The hotel has a counterpart at the extreme west end of Princes Street. The Caledonian Hotel, now the Caledonian Hilton, sits at the north end of Lothian Road. This was built by the Caledonian Railway
Caledonian Railway
The Caledonian Railway was a major Scottish railway company. It was formed in the early 19th century and it was absorbed almost a century later into the London, Midland and Scottish Railway, in the 1923 railway grouping, by means of the Railways Act 1921...
for their Princes Street Station
Princes Street railway station
Princes Street Station was a mainline railway station which stood at the west end of Princes Street, in Edinburgh, Scotland, for almost 100 years. A temporary station was opened in 1870, with construction of the main station commencing in the 1890s. The station was closed completely in 1965 and...
which closed in the 1960s along with the lines it served.

At the west end of Princes Street, St. John's Episcopal Church at the corner of Lothian Road is built at street level above a basement crypt and a small churchyard. In addition, there are several fair trade outlets in this space as part of the church, whilst St Cuthbert's Church stands just to the south of it, in a far larger and older churchyard, west of the gardens.

Princes Street remains popular, although it has now fallen from its status as the most expensive place to rent shop space in Britain outside London
London
London is the capital city of :England and the :United Kingdom, the largest metropolitan area in the United Kingdom, and the largest urban zone in the European Union by most measures. Located on the River Thames, London has been a major settlement for two millennia, its history going back to its...
. Princes Street may be one of the few streets in the UK to have an order of Parliament
Parliament of the United Kingdom
The Parliament of the United Kingdom of Great Britain and Northern Ireland is the supreme legislative body in the United Kingdom, British Crown dependencies and British overseas territories, located in London...
placed on it to prevent any further building on the south side, so as to preserve its open vista.