Encyclopedia
Midnight is the transition time period from one day
Day
A day is a unit of time, commonly defined as an interval equal to 24 hours. It also can mean that portion of the full day during which a location is illuminated by the light of the sun...
to the next: the moment when the date changes. In the Roman time system, midnight was halfway between sunset
Sunset
Sunset or sundown is the daily disappearance of the Sun below the horizon in the west as a result of Earth's rotation.The time of sunset is defined in astronomy as the moment the trailing edge of the Sun's disk disappears below the horizon in the west...
and sunrise
Sunrise
Sunrise is the instant at which the upper edge of the Sun appears above the horizon in the east. Sunrise should not be confused with dawn, which is the point at which the sky begins to lighten, some time before the sun itself appears, ending twilight...
, varying according to the season
Season
A season is a division of the year, marked by changes in weather, ecology, and hours of daylight.Seasons result from the yearly revolution of the Earth around the Sun and the tilt of the Earth's axis relative to the plane of revolution...
s.

Solar midnight is that time opposite of solar noon, when the sun is closest to nadir
Nadir
The nadir is the direction pointing directly below a particular location; that is, it is one of two vertical directions at a specified location, orthogonal to a horizontal flat surface there. Since the concept of being below is itself somewhat vague, scientists define the nadir in more rigorous...
and the night is equidistant from dusk and dawn. Due to the advent of time zone
Time zone
A time zone is a region on Earth that has a uniform standard time for legal, commercial, and social purposes. In order for the same clock time to always correspond to the same portion of the day as the Earth rotates , different places on the Earth need to have different clock times...
s, which make time identical across a range of meridian
Meridian (geography)
A meridian is an imaginary line on the Earth's surface from the North Pole to the South Pole that connects all locations along it with a given longitude. The position of a point along the meridian is given by its latitude. Each meridian is perpendicular to all circles of latitude...
s, and daylight saving time
Daylight saving time
Daylight saving time —also summer time in several countries including in British English and European official terminology —is the practice of temporarily advancing clocks during the summertime so that afternoons have more daylight and mornings have less...
, it rarely coincides with midnight on a clock. Solar midnight is dependent on longitude and time of the year rather than on a time zone.

In the northern hemisphere, "midnight" had an ancient geographic association with "north" (as did "noon" with "south" – see noon
Noon
Noon is usually defined as 12 o'clock in the daytime. The word noon is also used informally to mean midday regarding the location of the sun not the middle of a persons day. Although this is a time around the middle of the day when people in many countries take a lunch break...
). Modern Polish and Ukrainian preserve this association with their words for "midnight" ("północ", "північ" – literally "half-night"), which also means "north".


Start and end of day

Midnight marks the beginning and ending of each day in civil time throughout the world. It is the dividing point between one day and another. With 12-hour time notation
12-hour clock
The 12-hour clock is a time conversion convention in which the 24 hours of the day are divided into two periods called ante meridiem and post meridiem...
, most authorities recommend avoiding confusion by using "midnight", "12 midnight", or "12:00 midnight".

Digital clocks and computers commonly display 12 a.m. for midnight. While that phrase may be used practically, it helps to understand that any particular time is actually an instant. The "a.m." shown on clock displays refers to the 12-hour period following the instant of midnight, not to the instant itself. In other words, 11:59 p.m. shows until midnight; at the instant of midnight it changes to 12:00. Simultaneously, the p.m. changes to a.m., though, strictly speaking, a.m. does not apply to the instant of midnight which separates p.m. and a.m. In 24-hour time notation
24-hour clock
The 24-hour clock is a convention of time keeping in which the day runs from midnight to midnight and is divided into 24 hours, indicated by the hours passed since midnight, from 0 to 23. This system is the most commonly used time notation in the world today...
, "0:00" and "0:00:00" refer to midnight at the start of a given date. Some styles, such as ISO 8601, allow 24:00 to refer to the end of a day. Noon is 12:00:00. 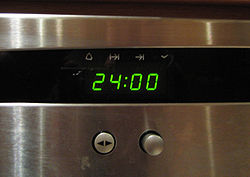 While computers and digital clocks display "12:00 a.m." and "12:00 p.m.", those notations provide no clear and unambiguous way to distinguish between midnight and noon. It is actually improper to use "a.m." and "p.m." when referring to 12:00. The abbreviation a.m. stands for ante meridiem or before noon and p.m. stands for post meridiem or after noon. Since noon is neither after noon nor before noon, and midnight can equally be twelve hours before and after noon, neither abbreviation is correct (although the length of the error is determined by the smallest unit of time — 12:00:01 p.m. would be correctly notated).

The thirtieth edition of the U.S. Government Style Manual (2008) sections 9.54 and 12.9b recommends the use of "12 a.m." for midnight and "12 p.m." for noon. Some religious calendars continue to begin the day at another time — for example, at dusk
Dusk
Dusk is the beginning of darkness in the evening, and occurs after twilight, when the sky generally remains bright and blue. Civil dusk is when the earth has rotated enough that the center of the sun is at 6° below the local horizon...
in the Hebrew calendar
Hebrew calendar
The Hebrew calendar , or Jewish calendar, is a lunisolar calendar used today predominantly for Jewish religious observances. It determines the dates for Jewish holidays and the appropriate public reading of Torah portions, yahrzeits , and daily Psalm reading, among many ceremonial uses...
and the Islamic calendar
Islamic calendar
The Hijri calendar , also known as the Muslim calendar or Islamic calendar , is a lunar calendar consisting of 12 lunar months in a year of 354 or 355 days. It is used to date events in many Muslim countries , and used by Muslims everywhere to determine the proper day on which to celebrate Islamic...
.