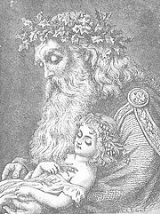 Encyclopedia
Father Time is usually depicted as an elderly bearded man, somewhat worse for wear, dressed in a robe, carrying a scythe
Scythe
A scythe is an agricultural hand tool for mowing grass, or reaping crops. It was largely replaced by horse-drawn and then tractor machinery, but is still used in some areas of Europe and Asia. The Grim Reaper is often depicted carrying or wielding a scythe...
and an hourglass
Hourglass
An hourglass measures the passage of a few minutes or an hour of time. It has two connected vertical glass bulbs allowing a regulated trickle of material from the top to the bottom. Once the top bulb is empty, it can be inverted to begin timing again. The name hourglass comes from historically...
or other timekeeping device (which represents time's
Arrow of time
The arrow of time, or time’s arrow, is a term coined in 1927 by the British astronomer Arthur Eddington to describe the "one-way direction" or "asymmetry" of time...
constant one-way movement, and more generally and abstractly, entropy
Entropy
Entropy is a thermodynamic property that can be used to determine the energy available for useful work in a thermodynamic process, such as in energy conversion devices, engines, or machines. Such devices can only be driven by convertible energy, and have a theoretical maximum efficiency when...
). This image derives from several sources, including the Grim Reaper and Chronos
Chronos
In Greek mythology, Chronos in pre-Socratic philosophical works is said to be the personification of time. His name in Greek means "time" and is alternatively spelled Chronus or Khronos.Chronos was imagined as an incorporeal god, serpentine in form, with three heads—those of a man, a bull, and...
, the Greek
Ancient Greece
Ancient Greece is a civilization belonging to a period of Greek history that lasted from the Archaic period of the 8th to 6th centuries BC to the end of antiquity. Immediately following this period was the beginning of the Early Middle Ages and the Byzantine era. Included in Ancient Greece is the...
god Lord of time in Greek mythology.

Around New Year's Eve
New Year's Eve
New Year's Eve is observed annually on December 31, the final day of any given year in the Gregorian calendar. In modern societies, New Year's Eve is often celebrated at social gatherings, during which participants dance, eat, consume alcoholic beverages, and watch or light fireworks to mark the...
many editorial cartoons use the convenient trope  of Father Time as the personification of the previous year (or "the Old Year") who typically "hands over" the duties of time to the equally allegorical Baby New Year
Baby New Year
The Baby New Year is a personification of the start of the New Year commonly seen in editorial cartoons. He symbolizes the "birth" of the next year, and that the "old" year is gone; in other words, a "rebirth"...
(or "the New Year") or who otherwise characterizes the preceding year.