List of largest buildings in the world
Topic Home
Discussion
0

Encyclopedia
This list of largest buildings in the world ranks building
Building
In architecture, construction, engineering, real estate development and technology the word building may refer to one of the following:...
s from around the world by usable space (volume
Volume
Volume is the quantity of three-dimensional space enclosed by some closed boundary, for example, the space that a substance or shape occupies or contains....
) and floor space (area
Area
Area is a quantity that expresses the extent of a two-dimensional surface or shape in the plane. Area can be understood as the amount of material with a given thickness that would be necessary to fashion a model of the shape, or the amount of paint necessary to cover the surface with a single coat...
). The term "building" used by this list refers to single structures that are suitable for continuous human occupancy. There are a few exceptions which include factories and warehouses.

Boeing's factory
Boeing Everett Factory
The Boeing Everett Factory, in Everett, Washington, is an airplane assembly building owned by Boeing. Located on the northeast corner of Paine Field, it is the largest building in the world by volume at 13,385,378 m3 and covers 399,480 m2...
in Everett
Everett, Washington
Everett is the county seat of and the largest city in Snohomish County, Washington, United States. Named for Everett Colby, son of founder Charles L. Colby, it lies north of Seattle. The city had a total population of 103,019 at the 2010 census, making it the 6th largest in the state and...
, Washington, United States
United States
The United States of America is a federal constitutional republic comprising fifty states and a federal district...
is presently the largest building in the world by volume, while Terminal 3 of Dubai International Airport
Dubai International Airport
Dubai International Airport is an international airport serving Dubai, the largest city of the United Arab Emirates. It is a major aviation hub in the Middle East, and is the main airport of Dubai. It is situated in the Al Garhoud district, southeast of Dubai...
is the largest building in terms of total floor area. The surface area of the proposed Crystal Island
Crystal Island
Crystal Island is a proposed building project in Moscow, Russia that is currently planned to have around 2,500,000 square metres of floor space and a height of 450 metres designed by Norman Foster. At these dimensions upon completion it would be the largest structure on earth...
complex in Moscow
Moscow
Moscow is the capital, the most populous city, and the most populous federal subject of Russia. The city is a major political, economic, cultural, scientific, religious, financial, educational, and transportation centre of Russia and the continent...
is more than double that of the largest current building, though this project has been delayed by the global economic crisis. The topped-out Abraj Al Bait Towers
Abraj Al Bait Towers
The Abraj Al-Bait Towers, also known as the Mecca Royal Hotel Clock Tower, is a building complex in Mecca, Saudi Arabia. The complex holds several world records, including the tallest hotel in the world, the tallest clock tower in the world, the world's largest clock face, and the world's largest...
in Mecca
Mecca
Mecca is a city in the Hijaz and the capital of Makkah province in Saudi Arabia. The city is located inland from Jeddah in a narrow valley at a height of above sea level...
, Saudi Arabia
Saudi Arabia
The Kingdom of Saudi Arabia , commonly known in British English as Saudi Arabia and in Arabic as as-Sa‘ūdiyyah , is the largest state in Western Asia by land area, constituting the bulk of the Arabian Peninsula, and the second-largest in the Arab World...
, have taken the record for the largest building in the world. It has the largest floor area of any structure in the world with 1,500,000 square metres (16,137,600 sq ft) of floorspace. They are also among the tallest buildings in the world at over 600 metres (1,968.5 ft).

This list ranks the buildings throughout the world with the largest usable space. 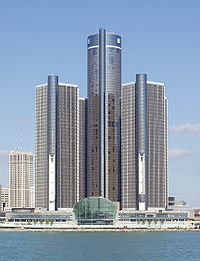 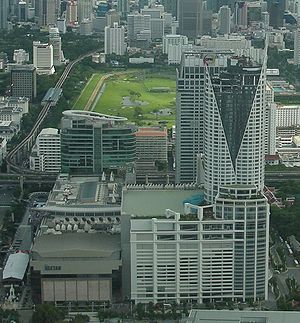 This list ranks the top 35 buildings throughout the world with the largest amount of floor area. The Mecca Royal Hotel Clock Tower, topped out in 2011, is the building with the largest floor area (1.500 million m²). Upon its opening in October 2008, Terminal 3 at Dubai International Airport at 1.185 million m² (12.76 million sq ft) of floor space surpassed the former leader, the Aalsmeer Flower Auction (990,000 m², or 10.6 million sq ft). Terminal 3 has a capacity of 43 million passengers, which by itself would be enough to place Dubai among the 20 busiest airports in the world by passenger traffic. For its part, the Aalsmeer Auction sees about 19 million flowers sold every day.

This list of special categories includes a variety of buildings which are the largest of their type.