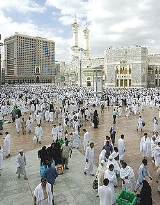 Overview
Mecca (ˈmɛkə; , Makkah, ˈmækːɐ) is a city in the Hijaz and the capital of Makkah province in Saudi Arabia
Saudi Arabia
The Kingdom of Saudi Arabia , commonly known in British English as Saudi Arabia and in Arabic as as-Sa‘ūdiyyah , is the largest state in Western Asia by land area, constituting the bulk of the Arabian Peninsula, and the second-largest in the Arab World...
. The city is located 73 km (45.4 mi) inland from Jeddah
Jeddah
Jeddah, Jiddah, Jidda, or Jedda is a city located on the coast of the Red Sea and is the major urban center of western Saudi Arabia. It is the largest city in Makkah Province, the largest sea port on the Red Sea, and the second largest city in Saudi Arabia after the capital city, Riyadh. The...
in a narrow valley at a height of 277 m (908.8 ft) above sea level. Its resident population in 2008 was 1.7 million, although visitors more than double this number every year during Dhu al-Hijjah
Dhu al-Hijjah
Dhu al-Ḥijjah is the twelfth and final month in the Islamic calendar.This is a very sacred month in the Islamic calendar, marking the end of the year. It is in this month in which the Hajj takes place....
.

As the birthplace of Muhammad
Muhammad
Muhammad |ligature]] at U+FDF4 ;Arabic pronunciation varies regionally; the first vowel ranges from ~~; the second and the last vowel: ~~~. There are dialects which have no stress. In Egypt, it is pronounced not in religious contexts...
and a site of the composition of the Quran, Mecca is regarded as the holiest city
Holy city
Holy city is a synonym applied to many cities, all of them central to the history or faith of specific religions. Such cities may also contain at least one headquarters complex which constitutes a major destination of human...
in Islam
Islam
Islam . The most common are and .   : Arabic pronunciation varies regionally. The first vowel ranges from ~~. The second vowel ranges from ~~~...
and a pilgrimage
Pilgrimage
A pilgrimage is a journey or search of great moral or spiritual significance. Typically, it is a journey to a shrine or other location of importance to a person's beliefs and faith...
to it known as the Hajj
Hajj
The Hajj is the pilgrimage to Mecca, Saudi Arabia. It is one of the largest pilgrimages in the world, and is the fifth pillar of Islam, a religious duty that must be carried out at least once in their lifetime by every able-bodied Muslim who can afford to do so...
is obligatory upon all able Muslim
Muslim
A Muslim, also spelled Moslem, is an adherent of Islam, a monotheistic, Abrahamic religion based on the Quran, which Muslims consider the verbatim word of God as revealed to prophet Muhammad. "Muslim" is the Arabic term for "submitter" .Muslims believe that God is one and incomparable...
s.

Is there any papulation there at the time of Ibrahim first time visited at Macca? If any, then Old name of the city Macca is what?

622    Prophet Muhammad completes his hijra from Mecca to Medina.

624    Muslim history: Led by Muhammad, the Muslims of Medina defeat the Quraysh of Mecca in the Battle of Badr.

1979    Grand Mosque Seizure: About 200 Sunni Muslims revolt in Saudi Arabia at the site of the Kaaba in Mecca during the pilgrimage and take about 6000 hostages. The Saudi government receives help from French special forces to put down the uprising.

1989    Two bombs explode in Mecca killing one pilgrim and wounding 16 others.

2001    In Mecca, 35 Muslim pilgrims are crushed to death during the annual Hajj pilgrimage.