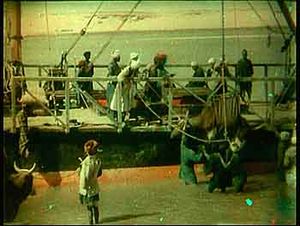 Kinemacolor was the first successful color motion picture process, used commercially from 1908 to 1914. It was invented by George Albert Smith
George Albert Smith (inventor)
George Albert Smith was a stage hypnotist, psychic, magic lantern lecturer, astronomer, inventor, and one of the pioneers of British cinema, who is best known for his controversial work with Edmund Gurney at the Society for Psychical Research, his short-films from 1897-1903 which pioneered film...
of Brighton
Brighton
Brighton is the major part of the city of Brighton and Hove in East Sussex, England on the south coast of Great Britain...
, England in 1906. He was influenced by the work of William Norman Lascelles Davidson
William Norman Lascelles Davidson
Captain William Norman Lascelles Davidson was an early experimenter in color cinematography.-Biography:Between 1898 and 1906 Davidson spent around £3,000 trying to create a workable motion picture system using natural pigments. Although his work was unsuccessful, he influenced the people who...
. It was launched by Charles Urban
Charles Urban
Charles Urban was an Anglo-American film producer and distributor, and one of the most significant figures in British cinema before the First World War...
's Urban Trading Co. of London
London
London is the capital city of :England and the :United Kingdom, the largest metropolitan area in the United Kingdom, and the largest urban zone in the European Union by most measures. Located on the River Thames, London has been a major settlement for two millennia, its history going back to its...
in 1908. From 1909 on, the process was known as Kinemacolor. It was a two-color
RG color space
The RG or red-green color space is a color space that uses only two colors, red and green. It is an additive format, similar to the RGB color model but without a blue channel. Thus, blue is said to be out of gamut...
additive color
Additive color
An additive color model involves light emitted directly from a source or illuminant of some sort. The additive reproduction process usually uses red, green and blue light to produce the other colors. Combining one of these additive primary colors with another in equal amounts produces the...
process, photographing and projecting a black-and-white film behind alternating red and cyan filters
Field-sequential color system
A field-sequential color system is a color television system in which the primary color information is transmitted in successive images, and which relies on the human vision system to fuse the successive images into a color picture. One field-sequential system was developed by Dr. Peter Goldmark...
.

Of the many attempts to produce cinematograph pictures... the greatest amount of attention so far has been attracted by a system invented by George Albert Smith, and commercially developed by Charles Urban under the name of "Kinemacolor." In this system (to quote from Cassell's Cyclopædia of Photography, edited by the editor of this present book), only two colour filters are used in taking the negatives and only two in projecting the positives. The camera resembles the ordinary cinematographic camera except that it runs at twice the speed, taking thirty-two images per second instead of sixteen, and it is fitted with a rotating colour filter in addition to the ordinary shutter. This filter is an aluminium skeleton wheel... having four segments, two open ones, G and H; one filled in with red-dyed gelatine, E F; and the fourth containing green-dyed gelatine, A B. The camera is so geared that exposures are made alternately through the red gelatine and the green gelatine. Panchromatic film is used, and the negative is printed from in the ordinary way, and it will be understood that there is no colour in the film itself.

The first motion picture exhibited in Kinemacolor was an eight-minute short filmed in Brighton titled A Visit to the Seaside
A Visit to the Seaside
A Visit to the Seaside was the first successful film in natural color and the film was filmed with Kinemacolor. It is an 8 minute short film of Brighton that shows people doing activities. It was directed by George Albert Smith. It is ranked high historical importance....
, which was trade shown in September 1908. On 26 February 1909, the general public first saw Kinemacolor in a programme of twenty-one short films shown at the Palace Theater in London. The process was first seen in the United States on 11 December 1909, at an exhibition staged by Smith and Urban at Madison Square Garden
Madison Square Garden
Madison Square Garden, often abbreviated as MSG and known colloquially as The Garden, is a multi-purpose indoor arena in the New York City borough of Manhattan and located at 8th Avenue, between 31st and 33rd Streets, situated on top of Pennsylvania Station.Opened on February 11, 1968, it is the...
in New York.

Kinemacolor projectors were eventually installed in some 300 cinemas in Britain, and 54 dramatic films were produced. Four dramatic short films were also produced by Kinemacolor in the United States in 1912–1913, and one in Japan, Yoshitsune Senbon Zakura (1914).

However, the company was never a success, partly due to the expense of installing special Kinemacolor projectors in cinemas. Also, the process suffered from "fringing" and "haloing" of the images, an insoluble problem as long as Kinemacolor remained a successive frame process. Kinemacolor in the U.S. became most notable for its Hollywood studio being taken over by D. W. Griffith
D. W. Griffith
David Llewelyn Wark Griffith was a premier pioneering American film director. He is best known as the director of the controversial and groundbreaking 1915 film The Birth of a Nation and the subsequent film Intolerance .Griffith's film The Birth of a Nation made pioneering use of advanced camera...
, who also took over Kinemacolor's failed plans to film Thomas Dixon's
Thomas Dixon, Jr.
Thomas F. Dixon, Jr. was an American Baptist minister, playwright, lecturer, North Carolina state legislator, lawyer, and author, perhaps best known for writing The Clansman — which was to become the inspiration for D. W...
The Clansman
The Clansman
The Clansman: An Historical Romance of the Ku Klux Klan is the title of a novel published in 1905. It was the second work in the Ku Klux Klan trilogy by Thomas F. Dixon, Jr. that included The Leopard's Spots and The Traitor. It was influential in providing the ideology that helped support the...
, which eventually became The Birth of a Nation
The Birth of a Nation
The Birth of a Nation is a 1915 American silent film directed by D. W. Griffith and based on the novel and play The Clansman, both by Thomas Dixon, Jr. Griffith also co-wrote the screenplay , and co-produced the film . It was released on February 8, 1915...
(1915
1915 in film
The year 1915 in film involved some significant events.-Events:* February 8 : D.W Griffith's The Birth of a Nation premieres at Clune's Auditorium Los Angeles and breaks box office and film length records, running at a total length of 3 hrs 10 minutes.* June 18 : The Motion Picture Directors...
).

The first (additive) version of Prizma Color
Prizma
The Prizma Color system was a technique of color motion picture photography, invented in 1913 by William Van Doren Kelley and Charles Raleigh. Initially, it was a two-color additive color system, similar to its predecessor, Kinemacolor...
, developed by William Van Doren Kelley in the U.S. from 1913 to 1917, used some of the same principles as Kinemacolor. In the U.K., William Friese-Greene
William Friese-Greene
William Friese-Greene was a British portrait photographer and prolific inventor. He is principally known as a pioneer in the field of motion pictures and is credited by some as the inventor of cinematography.-Career:William Edward Green was born on 7 September 1855, in Bristol...
developed another additive colour system for film called Biocolour. However, in 1914 George Albert Smith sued Friese-Greene for infringing Kinemacolor's patents, slowing the development of Biocolour by Friese-Greene and his son Claude
Claude Friese-Greene
Claude Friese-Greene , British-born cinema technician, filmmaker, and cinematographer, most famous for his 1926 collection of films entitled The Open Road....
in the 1920s.