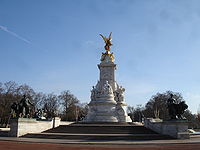 The Victoria Memorial is a sculpture in London
London
London is the capital city of :England and the :United Kingdom, the largest metropolitan area in the United Kingdom, and the largest urban zone in the European Union by most measures. Located on the River Thames, London has been a major settlement for two millennia, its history going back to its...
, placed at the centre of Queen's Gardens in front of Buckingham Palace
Buckingham Palace
Buckingham Palace, in London, is the principal residence and office of the British monarch. Located in the City of Westminster, the palace is a setting for state occasions and royal hospitality...
and dedicated to Queen Victoria
Victoria of the United Kingdom
Victoria was the monarch of the United Kingdom of Great Britain and Ireland from 20 June 1837 until her death. From 1 May 1876, she used the additional title of Empress of India....
.

The Memorial was dedicated in 1911 by George V
George V of the United Kingdom
George V was King of the United Kingdom and the British Dominions, and Emperor of India, from 6 May 1910 through the First World War until his death in 1936....
and his first cousin, Wilhelm II of Germany, the two senior grandsons of Victoria. The sculptor was Sir Thomas Brock
Thomas Brock
Sir Thomas Brock KCB RA was an English sculptor.- Life :Brock was born in Worcester, attended the School of Design in Worcester and then undertook an apprenticeship in modelling at the Worcester Royal Porcelain Works. In 1866 he became a pupil of the sculptor John Henry Foley. He married in 1869,...
. It was completed with the installation of the final bronze statues in 1914.

The surround was constructed by the architect Sir Aston Webb
Aston Webb
Sir Aston Webb, RA, FRIBA was an English architect, active in the late 19th century and at the beginning of the 20th century...
, from 2,300 tons of white marble
Marble
Marble is a metamorphic rock composed of recrystallized carbonate minerals, most commonly calcite or dolomite.Geologists use the term "marble" to refer to metamorphosed limestone; however stonemasons use the term more broadly to encompass unmetamorphosed limestone.Marble is commonly used for...
. It is a Grade I listed building.

It has a large statue of Queen Victoria facing north-eastwards towards The Mall
The Mall (London)
The Mall in central London is the road running from Buckingham Palace at its western end to Admiralty Arch and on to Trafalgar Square at its eastern end. It then crosses Spring Gardens, which was where the Metropolitan Board of Works and, for a number of years, the London County Council were...
. The other sides of the monument feature dark patinated bronze statues of the Angel of Justice (facing north-westwards toward Green Park
Green Park
-External links:*...
), the Angel of Truth (facing south-eastwards) and Charity facing Buckingham Palace. On the pinnacle, is Victory with two seated figures. The subsidiary figures were given by the people of New Zealand
New Zealand
New Zealand is an island country in the south-western Pacific Ocean comprising two main landmasses and numerous smaller islands. The country is situated some east of Australia across the Tasman Sea, and roughly south of the Pacific island nations of New Caledonia, Fiji, and Tonga...
.

The whole sculpture has a nautical theme, much like the rest of the mall (Admiralty Arch
Admiralty Arch
Admiralty Arch is a large office building in London which incorporates an archway providing road and pedestrian access between The Mall, which extends to the South-West, and Trafalgar Square to the North-East. It was designed by Sir Aston Webb, constructed by John Mowlem & Co and completed in 1912...
etc.). This can be seen in the mermaid
Mermaid
A mermaid is a mythological aquatic creature with a female human head, arms, and torso and the tail of a fish. A male version of a mermaid is known as a "merman" and in general both males and females are known as "merfolk"...
s, mermen
Merman
Mermen are mythical male equivalents of mermaids – legendary creatures who have the form of a human from the waist up and are fish-like from the waist down.-Mythology:...
and a hippogriff
Hippogriff
A Hippogriff is a legendary creature, supposedly the offspring of a griffin and a mare.- Early references :...
, all of which are suggestive of the United Kingdom
British Empire
The British Empire comprised the dominions, colonies, protectorates, mandates and other territories ruled or administered by the United Kingdom. It originated with the overseas colonies and trading posts established by England in the late 16th and early 17th centuries. At its height, it was the...
's naval power.