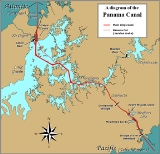 Overview
The Panama Canal is a 77 kilometres (48 mi) ship canal
Ship canal
A ship canal is a canal especially constructed to carry ocean-going ships, as opposed to barges. Ship canals can be enlarged barge canals, canalized or channelized rivers, or canals especially constructed from the start to accommodate ships....
in Panama
Panama
Panama , officially the Republic of Panama , is the southernmost country of Central America. Situated on the isthmus connecting North and South America, it is bordered by Costa Rica to the northwest, Colombia to the southeast, the Caribbean Sea to the north and the Pacific Ocean to the south. The...
that joins the Atlantic Ocean
Atlantic Ocean
The Atlantic Ocean is the second-largest of the world's oceanic divisions. With a total area of about , it covers approximately 20% of the Earth's surface and about 26% of its water surface area...
and the Pacific Ocean
Pacific Ocean
The Pacific Ocean is the largest of the Earth's oceanic divisions. It extends from the Arctic in the north to the Southern Ocean in the south, bounded by Asia and Australia in the west, and the Americas in the east.At 165.2 million square kilometres in area, this largest division of the World...
and is a key conduit for international maritime trade. Built from 1904 to 1914, the canal has seen annual traffic rise from about 1,000 ship
Ship
Since the end of the age of sail a ship has been any large buoyant marine vessel. Ships are generally distinguished from boats based on size and cargo or passenger capacity. Ships are used on lakes, seas, and rivers for a variety of activities, such as the transport of people or goods, fishing,...
s early on to 14,702 vessels measuring a total of 309.6 million Panama Canal/Universal Measurement System (PC/UMS) tons in 2008. In total, over 815,000 vessels have passed through the canal.

Was the size of the Panama Canal locks built so the Titanic could fit?
More

History of the canal

What does the future hold for the Panama Canal?
More

1902    The U.S. Congress passes the Spooner Act, authorizing President Theodore Roosevelt to acquire rights from Colombia for the Panama Canal.

1902    The United States buys the rights to the Panama Canal from France.

1904    Construction begins by the United States on the Panama Canal.

1906    Theodore Roosevelt is the first sitting President of the United States to make an official trip outside the country. He did so to inspect progress on the Panama Canal.

1914    The Panama Canal opens to traffic with the transit of the cargo ship Ancon.