Encyclopedia
In the 8th millennium BC, agriculture
Agriculture
Agriculture is the cultivation of animals, plants, fungi and other life forms for food, fiber, and other products used to sustain life. Agriculture was the key implement in the rise of sedentary human civilization, whereby farming of domesticated species created food surpluses that nurtured the...
became widely practised in the Fertile Crescent
Fertile Crescent
The Fertile Crescent, nicknamed "The Cradle of Civilization" for the fact the first civilizations started there, is a crescent-shaped region containing the comparatively moist and fertile land of otherwise arid and semi-arid Western Asia. The term was first used by University of Chicago...
and Anatolia
Anatolia
Anatolia is a geographic and historical term denoting the westernmost protrusion of Asia, comprising the majority of the Republic of Turkey...
.

Pottery
Pottery
Pottery is the material from which the potteryware is made, of which major types include earthenware, stoneware and porcelain. The place where such wares are made is also called a pottery . Pottery also refers to the art or craft of the potter or the manufacture of pottery...
became widespread (with independent development in Central America
Central America
Central America is the central geographic region of the Americas. It is the southernmost, isthmian portion of the North American continent, which connects with South America on the southeast. When considered part of the unified continental model, it is considered a subcontinent...
) and animal husbandry
Animal husbandry
Animal husbandry is the agricultural practice of breeding and raising livestock.- History :Animal husbandry has been practiced for thousands of years, since the first domestication of animals....
(pastoralism
Pastoralism
Pastoralism or pastoral farming is the branch of agriculture concerned with the raising of livestock. It is animal husbandry: the care, tending and use of animals such as camels, goats, cattle, yaks, llamas, and sheep. It may have a mobile aspect, moving the herds in search of fresh pasture and...
) spread to Africa
Africa
Africa is the world's second largest and second most populous continent, after Asia. At about 30.2 million km² including adjacent islands, it covers 6% of the Earth's total surface area and 20.4% of the total land area...
and Eurasia
Eurasia
Eurasia is a continent or supercontinent comprising the traditional continents of Europe and Asia ; covering about 52,990,000 km2 or about 10.6% of the Earth's surface located primarily in the eastern and northern hemispheres...
. World population
World population
The world population is the total number of living humans on the planet Earth. As of today, it is estimated to be  billion by the United States Census Bureau...
was approximately 5 million. 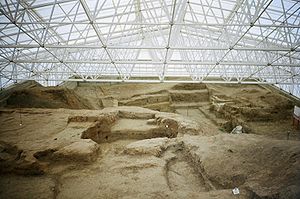 
In works of fiction