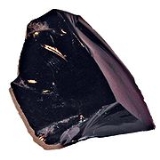 Overview
Obsidian is a naturally occurring volcanic glass
Volcanic glass
Volcanic glass is the amorphous product of rapidly cooling magma. Like all types of glass, it is a state of matter intermediate between the close-packed, highly ordered array of a crystal and the highly disordered array of gas...
formed as an extrusive igneous rock
Igneous rock
Igneous rock is one of the three main rock types, the others being sedimentary and metamorphic rock. Igneous rock is formed through the cooling and solidification of magma or lava...
.

It is produced when felsic
Felsic
The word "felsic" is a term used in geology to refer to silicate minerals, magma, and rocks which are enriched in the lighter elements such as silicon, oxygen, aluminium, sodium, and potassium....
lava
Lava
Lava refers both to molten rock expelled by a volcano during an eruption and the resulting rock after solidification and cooling. This molten rock is formed in the interior of some planets, including Earth, and some of their satellites. When first erupted from a volcanic vent, lava is a liquid at...
extruded from a volcano
Volcano
2. Bedrock3. Conduit 4. Base5. Sill6. Dike7. Layers of ash emitted by the volcano8. Flank| 9. Layers of lava emitted by the volcano10. Throat11. Parasitic cone12. Lava flow13. Vent14. Crater15...
cools rapidly with minimum crystal growth. Obsidian is commonly found within the margins of rhyolitic
Rhyolite
This page is about a volcanic rock. For the ghost town see Rhyolite, Nevada, and for the satellite system, see Rhyolite/Aquacade.Rhyolite is an igneous, volcanic rock, of felsic composition . It may have any texture from glassy to aphanitic to porphyritic...
lava flows known as obsidian flows, where the chemical composition (high silica
Silicon dioxide
The chemical compound silicon dioxide, also known as silica , is an oxide of silicon with the chemical formula '. It has been known for its hardness since antiquity...
content) induces a high viscosity and polymerization degree of the lava.

What are interesting facts about obsidian rocks?

What characteristics of obsidian make it an exception to the strict definition of a rock?
More