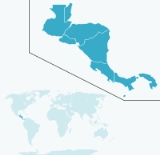 What are the land and water features of central America?