An upper house is usually distinct from the lower house in at least one of the following respects: 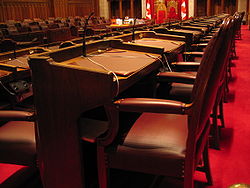 The role of a revising chamber is to scrutinise legislation that may have been drafted over-hastily in the lower house, and to suggest amendments that the lower house may nevertheless reject if it wishes to. An example is the British House of Lords. Under the Parliament Acts 1911 and 1949
Parliament Acts 1911 and 1949
The Parliament Acts 1911 and 1949 are two Acts of the Parliament of the United Kingdom, which form part of the constitution of the United Kingdom. Section 2 of the Parliament Act 1949 provides that that Act and the Parliament Act 1911 are to be construed as one.The Parliament Act 1911 The...
, the House of Lords can no longer prevent the passage of most bills, but it must be given an opportunity to debate them and propose amendments, and can thereby delay the passage of a bill with which it disagrees. It is sometimes seen as having a special role of safeguarding the Constitution of the United Kingdom
Constitution of the United Kingdom
The constitution of the United Kingdom is the set of laws and principles under which the United Kingdom is governed.Unlike many other nations, the UK has no single core constitutional document. In this sense, it is said not to have a written constitution but an uncodified one...
and important civil liberties
Civil liberties
Civil liberties are rights and freedoms that provide an individual specific rights such as the freedom from slavery and forced labour, freedom from torture and death, the right to liberty and security, right to a fair trial, the right to defend one's self, the right to own and bear arms, the right...
against ill-considered change. Even without a veto, an upper house may defeat legislation. Its opposition may give the lower chamber a chance to reconsider or even abandon a controversial measure. It can also delay a bill so that it does not fit within the legislative schedule, or until a general election
General election
In a parliamentary political system, a general election is an election in which all or most members of a given political body are chosen. The term is usually used to refer to elections held for a nation's primary legislative body, as distinguished from by-elections and local elections.The term...
produces a new lower house that no longer wishes to proceed with the bill.

Nevertheless, some states have long retained powerful upper houses. For example, the consent of the upper house to legislation may be necessary (though, as noted above, this seldom extends to budgetary measures). Constitutional arrangements of states with powerful upper houses usually include a means to resolve situations where the two houses are at odds with each other.

In recent times, Parliamentary systems have tended to weaken the powers of upper houses relative to their lower counterparts. Some upper houses have been abolished completely (see below); others have had their powers reduced by constitutional or legislative amendments. Also, conventions
Constitutional convention (political custom)
A constitutional convention is an informal and uncodified procedural agreement that is followed by the institutions of a state. In some states, notably those Commonwealth of Nations states that follow the Westminster system and whose political systems derive from British constitutional law, most...
often exist that the upper house ought not to obstruct the business of government for frivolous or merely partisan reasons. These conventions have tended to harden with passage of time.

In presidential system
Presidential system
A presidential system is a system of government where an executive branch exists and presides separately from the legislature, to which it is not responsible and which cannot, in normal circumstances, dismiss it....
s, the upper house is frequently given other powers to compensate for its restrictions:

There is great variety in the way an upper house's members are assembled: by direct or indirection election, appointment, heredity, or a mixture of these. The German Bundesrat is composed of members of the cabinets
Cabinet (government)
A Cabinet is a body of high ranking government officials, typically representing the executive branch. It can also sometimes be referred to as the Council of Ministers, an Executive Council, or an Executive Committee.- Overview :...
of the German states
States of Germany
Germany is made up of sixteen which are partly sovereign constituent states of the Federal Republic of Germany. Land literally translates as "country", and constitutionally speaking, they are constituent countries...
, in most cases the state premier
Premier
Premier is a title for the head of government in some countries and states.-Examples by country:In many nations, "premier" is used interchangeably with "prime minister"...
and several ministers; they are delegated and can be recalled anytime. In a very similar way the Council of the European Union
Council of the European Union
The Council of the European Union is the institution in the legislature of the European Union representing the executives of member states, the other legislative body being the European Parliament. The Council is composed of twenty-seven national ministers...
is composed of national ministers.

Many upper houses are not directly elected, but appointed: either by the head of government
Head of government
Head of government is the chief officer of the executive branch of a government, often presiding over a cabinet. In a parliamentary system, the head of government is often styled prime minister, chief minister, premier, etc...
or in some other way. This is usually intended to produce a house of experts or otherwise distinguished citizens, who would not necessarily be returned in an election. For example, members of the Canadian Senate
Canadian Senate
The Senate of Canada is a component of the Parliament of Canada, along with the House of Commons, and the monarch . The Senate consists of 105 members appointed by the governor general on the advice of the prime minister...
are appointed by the Governor General
Governor General of Canada
The Governor General of Canada is the federal viceregal representative of the Canadian monarch, Queen Elizabeth II...
on advice of the Prime Minister
Prime Minister of Canada
The Prime Minister of Canada is the primary minister of the Crown, chairman of the Cabinet, and thus head of government for Canada, charged with advising the Canadian monarch or viceroy on the exercise of the executive powers vested in them by the constitution...
.

The seats are sometimes hereditary, as still is partly the case in the British House of Lords
House of Lords
The House of Lords is the upper house of the Parliament of the United Kingdom. Like the House of Commons, it meets in the Palace of Westminster....
and formerly in the Japanese House of Peers until it was abolished in 1947.

The upper house may be directly elected but in different proportions to the lower house - for example, the Senates of Australia
Australia
Australia , officially the Commonwealth of Australia, is a country in the Southern Hemisphere comprising the mainland of the Australian continent, the island of Tasmania, and numerous smaller islands in the Indian and Pacific Oceans. It is the world's sixth-largest country by total area...
and the United States
United States
The United States of America is a federal constitutional republic comprising fifty states and a federal district...
have a fixed number of elected representatives from each state, regardless of the population.

The Australia
Australia
Australia , officially the Commonwealth of Australia, is a country in the Southern Hemisphere comprising the mainland of the Australian continent, the island of Tasmania, and numerous smaller islands in the Indian and Pacific Oceans. It is the world's sixth-largest country by total area...
n state of Queensland
Queensland
Queensland is a state of Australia, occupying the north-eastern section of the mainland continent. It is bordered by the Northern Territory, South Australia and New South Wales to the west, south-west and south respectively. To the east, Queensland is bordered by the Coral Sea and Pacific Ocean...
also once had an appointed Legislative Council
Queensland Legislative Council
The Queensland Legislative Council was the upper house of the parliament in the Australian state of Queensland. It was a fully nominated body which first took office on 1 May 1860. It was abolished by the Constitution Amendment Act 1921, which took effect on 23 March 1922.Consequently, the...
before abolishing it in 1922. All other Australian states continue to have bicameral systems. Like Queensland, the German
Germany
Germany , officially the Federal Republic of Germany , is a federal parliamentary republic in Europe. The country consists of 16 states while the capital and largest city is Berlin. Germany covers an area of 357,021 km2 and has a largely temperate seasonal climate...
state
States of Germany
Germany is made up of sixteen which are partly sovereign constituent states of the Federal Republic of Germany. Land literally translates as "country", and constitutionally speaking, they are constituent countries...
of Bavaria
Bavaria
Bavaria, formally the Free State of Bavaria is a state of Germany, located in the southeast of Germany. With an area of , it is the largest state by area, forming almost 20% of the total land area of Germany...
had an appointed upper house, the Senate of Bavaria
Senate of Bavaria
The Senate of Bavaria was the corporative upper chamber of Bavaria's parliamentary system from 1946 to 1999, when it was abolished by a popular vote changing the constitution of this State of the German federation....
, from 1946 to 1999.