Encyclopedia
The Province of Lower Canada (French: Province du Bas-Canada) was a British colony
British colonization of the Americas
British colonization of the Americas began in 1607 in Jamestown, Virginia and reached its peak when colonies had been established throughout the Americas...
on the lower Saint Lawrence River
Saint Lawrence River
The Saint Lawrence is a large river flowing approximately from southwest to northeast in the middle latitudes of North America, connecting the Great Lakes with the Atlantic Ocean. It is the primary drainage conveyor of the Great Lakes Basin...
and the shores of the Gulf of Saint Lawrence
Gulf of Saint Lawrence
The Gulf of Saint Lawrence , the world's largest estuary, is the outlet of North America's Great Lakes via the Saint Lawrence River into the Atlantic Ocean...
(1791–1841). It covered the southern portion of the modern-day Province of Quebec
Quebec
Quebec or is a province in east-central Canada. It is the only Canadian province with a predominantly French-speaking population and the only one whose sole official language is French at the provincial level....
, Canada
Canada
Canada is a North American country consisting of ten provinces and three territories. Located in the northern part of the continent, it extends from the Atlantic Ocean in the east to the Pacific Ocean in the west, and northward into the Arctic Ocean...
, and the Labrador
Labrador
Labrador is the distinct, northerly region of the Canadian province of Newfoundland and Labrador. It comprises the mainland portion of the province, separated from the island of Newfoundland by the Strait of Belle Isle...
region of the modern-day Province of Newfoundland and Labrador
Newfoundland and Labrador
Newfoundland and Labrador is the easternmost province of Canada. Situated in the country's Atlantic region, it incorporates the island of Newfoundland and mainland Labrador with a combined area of . As of April 2011, the province's estimated population is 508,400...
(until the Labrador region was transferred to Newfoundland in 1809).

Lower Canada consisted of part of former French colony
French colonization of the Americas
The French colonization of the Americas began in the 16th century, and continued in the following centuries as France established a colonial empire in the Western Hemisphere. France founded colonies in much of eastern North America, on a number of Caribbean islands, and in South America...
of New France
New France
New France was the area colonized by France in North America during a period beginning with the exploration of the Saint Lawrence River by Jacques Cartier in 1534 and ending with the cession of New France to Spain and Great Britain in 1763...
, populated mainly by French Canadians, which was ceded to Great Britain after that empire's victory in the Seven Years' War
Seven Years' War
The Seven Years' War was a global military war between 1756 and 1763, involving most of the great powers of the time and affecting Europe, North America, Central America, the West African coast, India, and the Philippines...
, also called the French and Indian Wars
French and Indian Wars
The French and Indian Wars is a name used in the United States for a series of conflicts lasting 74 years in North America that represented colonial events related to the European dynastic wars...
in the United States. Other parts of New France ceded to Britain became the Colonies of Nova Scotia
Nova Scotia
Nova Scotia is one of Canada's three Maritime provinces and is the most populous province in Atlantic Canada. The name of the province is Latin for "New Scotland," but "Nova Scotia" is the recognized, English-language name of the province. The provincial capital is Halifax. Nova Scotia is the...
, New Brunswick
New Brunswick
New Brunswick is one of Canada's three Maritime provinces and is the only province in the federation that is constitutionally bilingual . The provincial capital is Fredericton and Saint John is the most populous city. Greater Moncton is the largest Census Metropolitan Area...
and Prince Edward Island
Prince Edward Island
Prince Edward Island is a Canadian province consisting of an island of the same name, as well as other islands. The maritime province is the smallest in the nation in both land area and population...
.

Like Upper Canada, there was political unrest and a rebellion challenged the British
United Kingdom
The United Kingdom of Great Britain and Northern IrelandIn the United Kingdom and Dependencies, other languages have been officially recognised as legitimate autochthonous languages under the European Charter for Regional or Minority Languages...
rule of the predominantly French
French people
The French are a nation that share a common French culture and speak the French language as a mother tongue. Historically, the French population are descended from peoples of Celtic, Latin and Germanic origin, and are today a mixture of several ethnic groups...
population. After the Patriote Rebellion
Lower Canada Rebellion
The Lower Canada Rebellion , commonly referred to as the Patriots' War by Quebeckers, is the name given to the armed conflict between the rebels of Lower Canada and the British colonial power of that province...
was crushed by the British army and Loyal
Loyal (Lower Canada)
The Loyals were opponents of the Patriotes during the Lower Canada Rebellion in 1837 and 1838.Loyal volunteers, such as those recruited from the Doric Club, were instrumental in quelling the uprising...
volunteers, the 1791 Constitution was suspended on March 27, 1838 and a special council
Special Council of Lower Canada
The Special Council of Lower Canada was an appointed body which administered Lower Canada until the Union Act of 1840 created the Province of Canada. Following the Lower Canada Rebellion, on March 27, 1838, the Constitutional Act of 1791 was suspended and both the Legislative Assembly and...
was appointed to administer the colony.

The provinces of Lower Canada and Upper Canada were combined as the United Province of Canada in 1841, when The Union Act came into force. Their separate legislatures were combined into a single parliament with equal representation for both constituent parts, even if Lower Canada had more population. 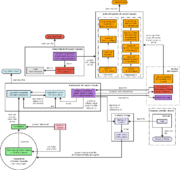