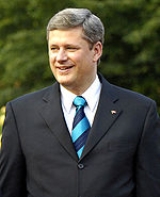 Overview
The Prime Minister of Canada is the primary minister of the Crown
Minister of the Crown
Minister of the Crown is the formal constitutional term used in the Commonwealth realms to describe a minister to the reigning sovereign. The term indicates that the minister serves at His/Her Majesty's pleasure, and advises the monarch, or viceroy, on how to exercise the Crown prerogatives...
, chairman of the Cabinet
Cabinet of Canada
The Cabinet of Canada is a body of ministers of the Crown that, along with the Canadian monarch, and within the tenets of the Westminster system, forms the government of Canada...
, and thus head of government
Head of government
Head of government is the chief officer of the executive branch of a government, often presiding over a cabinet. In a parliamentary system, the head of government is often styled prime minister, chief minister, premier, etc...
for Canada
Canada
Canada is a North American country consisting of ten provinces and three territories. Located in the northern part of the continent, it extends from the Atlantic Ocean in the east to the Pacific Ocean in the west, and northward into the Arctic Ocean...
, charged with advising
Advice (constitutional)
Advice, in constitutional law, is formal, usually binding, instruction given by one constitutional officer of state to another. Especially in parliamentary systems of government, Heads of state often act on the basis of advice issued by prime ministers or other government ministers...
the Canadian monarch or viceroy
Viceroy
A viceroy is a royal official who runs a country, colony, or province in the name of and as representative of the monarch. The term derives from the Latin prefix vice-, meaning "in the place of" and the French word roi, meaning king. A viceroy's province or larger territory is called a viceroyalty...
on the exercise of the executive powers
Executive (government)
Executive branch of Government is the part of government that has sole authority and responsibility for the daily administration of the state bureaucracy. The division of power into separate branches of government is central to the idea of the separation of powers.In many countries, the term...
vested in them by the constitution
Constitution of Canada
The Constitution of Canada is the supreme law in Canada; the country's constitution is an amalgamation of codified acts and uncodified traditions and conventions. It outlines Canada's system of government, as well as the civil rights of all Canadian citizens and those in Canada...
. Not outlined in any constitutional document, the office exists only as per long-established convention originating in Canada's former colonial power, the United Kingdom
United Kingdom
The United Kingdom of Great Britain and Northern IrelandIn the United Kingdom and Dependencies, other languages have been officially recognised as legitimate autochthonous languages under the European Charter for Regional or Minority Languages...
, which stipulate that the monarch's representative, the governor general
Governor General of Canada
The Governor General of Canada is the federal viceregal representative of the Canadian monarch, Queen Elizabeth II...
, must select as prime minister
Prime minister
A prime minister is the most senior minister of cabinet in the executive branch of government in a parliamentary system. In many systems, the prime minister selects and may dismiss other members of the cabinet, and allocates posts to members within the government. In most systems, the prime...
the person most likely to command the confidence
Confidence and supply
In a parliamentary democracy confidence and supply are required for a government to hold power. A confidence and supply agreement is an agreement that a minor party or independent member of parliament will support the government in motions of confidence and appropriation votes by voting in favour...
of the elected House of Commons
Canadian House of Commons
The House of Commons of Canada is a component of the Parliament of Canada, along with the Sovereign and the Senate. The House of Commons is a democratically elected body, consisting of 308 members known as Members of Parliament...
; this individual is typically the leader of the political party that holds the largest number of seats in that chamber.

1926    Arthur Meighen returns to office as Prime Minister of Canada.

2006    The Canadian House of Commons endorses Prime Minister Stephen Harper's motion to declare Quebec a nation within a unified Canada.