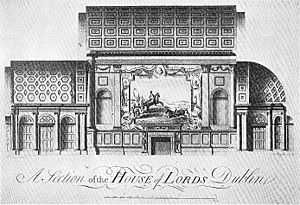 The Lords' function was to debate and approve, block or alter Bills
Bill (proposed law)
A bill is a proposed law under consideration by a legislature. A bill does not become law until it is passed by the legislature and, in most cases, approved by the executive. Once a bill has been enacted into law, it is called an act or a statute....
that were passed by the Irish House of Commons and proposed by the Lord Deputy of Ireland
Lord Deputy of Ireland
The Lord Deputy was the King's representative and head of the Irish executive under English rule, during the Lordship of Ireland and later the Kingdom of Ireland...
on behalf of the monarch.

The House of Lords was presided over by the Lord Chancellor
Lord Chancellor of Ireland
The office of Lord Chancellor of Ireland was the highest judicial office in Ireland until the establishment of the Irish Free State in 1922. From 1721 to 1801 it was also the highest political office of the Irish Parliament.-13th century:...
, who sat on the woolsack
Woolsack
The Woolsack is the seat of the Lord Speaker in the House of Lords, the Upper House of the Parliament of the United Kingdom. From the Middle Ages until 2006, the presiding officer in the House of Lords was the Lord Chancellor and the Woolsack was usually mentioned in association with the office of...
, a large seat stuffed with wool from each of the three lands of England, Ireland and Scotland. At the state opening of the Irish parliament Members of Parliament were summoned to the House of Lords from the House of Commons chamber by Black Rod
Black Rod
The Gentleman Usher of the Black Rod, generally shortened to just Black Rod, is an official in the parliaments of several Commonwealth countries. The position originates in the House of Lords of the Parliament of the United Kingdom...
, a royal official who would "command the members on behalf of His Excellency to attend him in the chamber of peers" Sessions were formally opened by the Speech from the Throne
Speech from the Throne
A speech from the throne is an event in certain monarchies in which the reigning sovereign reads a prepared speech to a complete session of parliament, outlining the government's agenda for the coming session...
by the Lord Lieutenant
Lord Lieutenant of Ireland
The Lord Lieutenant of Ireland was the British King's representative and head of the Irish executive during the Lordship of Ireland , the Kingdom of Ireland and the United Kingdom of Great Britain and Ireland...
, who sat on the throne beneath a canopy of crimson velvet.

Religious division was reflected in the House, but as late as the 1689 "Patriot Parliament
Patriot Parliament
The Patriot Parliament is the name given to the session of the Irish Parliament called by King James II of Ireland during the War of the Two Kings in 1689. The parliament met in one session, from 7 May 1689 to 20 July 1689, and was the only session of the Irish Parliament under King James II.The...
" a majority of Lords had remained Roman Catholics, while the administration and a slight majority in the Commons were Anglican. By 1632 the (Catholic) Lord Baltimore
George Calvert, 1st Baron Baltimore
Sir George Calvert, 1st Baron Baltimore, 8th Proprietary Governor of Newfoundland was an English politician and colonizer. He achieved domestic political success as a Member of Parliament and later Secretary of State under King James I...
established colonies in Newfoundland
Province of Avalon
Province of Avalon was the area around the settlement of Ferryland, Newfoundland and Labrador, in the 17th century, which upon the success of the colony grew to include the land held by Sir William Vaughan and all the land that lay between Ferryland and Petty Harbour.Sir George Calvert had acquired...
and Maryland
Province of Maryland
The Province of Maryland was an English and later British colony in North America that existed from 1632 until 1776, when it joined the other twelve of the Thirteen Colonies in rebellion against Great Britain and became the U.S...
. In 1634 the campaign to secure "The Graces"
The Graces (Ireland)
The Graces were a proposed series of reforms sought by Roman Catholics in Ireland in 1628-1634.-Background:From 1570 to 1625 most people in the Kingdom of Ireland had remained Roman Catholic despite legislation that was increasingly excluding them from the political and official worlds...
came to a head. Most of these Catholic lords lost their titles in the ensuing 1641 rebellion
Irish Rebellion of 1641
The Irish Rebellion of 1641 began as an attempted coup d'état by Irish Catholic gentry, who tried to seize control of the English administration in Ireland to force concessions for the Catholics living under English rule...
, notably during the 1652 Cromwellian Settlement
Act for the Settlement of Ireland 1652
The Act for the Settlement of Ireland imposed penalties including death and land confiscation against participants and bystanders of the Irish Rebellion of 1641 and subsequent unrest.-Background:...
. These dispossessed lords were regranted their titles (if not always their lands) after the Restoration of 1660
Restoration (Ireland)
The Restoration of the monarchy began in 1660 when the English, Scottish and Irish monarchies were all restored under Charles II after the Commonwealth of England, Scotland and Ireland that followed the Wars of the Three Kingdoms...
by the Act of Settlement 1662
Act of Settlement 1662
The Act of Settlement 1662 passed by the Irish Parliament in Dublin. It was a partial reversal of the Cromwellian Act of Settlement 1652, which punished Irish Catholics and Royalists for fighting against the English Parliament in the Wars of the Three Kingdoms by the wholesale confiscation of their...
. Others took the losing side in the Williamite War in Ireland
Williamite war in Ireland
The Williamite War in Ireland—also called the Jacobite War in Ireland, the Williamite-Jacobite War in Ireland and in Irish as Cogadh an Dá Rí —was a conflict between Catholic King James II and Protestant King William of Orange over who would be King of England, Scotland and Ireland...
(1689-91), and a much smaller number of them were re-granted their lands in the 18th century.

By the 1790s most of the Lords personified and wanted to protect the "Protestant Ascendancy
Protestant Ascendancy
The Protestant Ascendancy, usually known in Ireland simply as the Ascendancy, is a phrase used when referring to the political, economic, and social domination of Ireland by a minority of great landowners, Protestant clergy, and professionals, all members of the Established Church during the 17th...
". By the time of its abolition in 1800 some of the peerages were very ancient, such as the lords Kingsale
Baron Kingsale
The Barony of Kingsale is one of the most ancient peerage titles in Britain or Ireland. The Barony, in the Peerage of Ireland, dates to the thirteenth century, perhaps being created circa 1223, though other sources give different dates. The first creation was by writ. The title was officially...
, created in 1397, and the viscounts Gormanston
Viscount Gormanston
Viscount Gormanston is a title in the Peerage of Ireland held by the head of the Preston family. It was created in 1478. The holder is the senior Viscount of Ireland, as well as the bearer of the oldest vicomital title in either Britain or Ireland. The Preston family descends from Sir Robert...
from 1478. The first Earl of Kildare had been created in 1316.

Following the Act of Union in 1800, the peerage of Ireland
Peerage of Ireland
The Peerage of Ireland is the term used for those titles of nobility created by the English and later British monarchs of Ireland in their capacity as Lord or King of Ireland. The creation of such titles came to an end in the 19th century. The ranks of the Irish peerage are Duke, Marquess, Earl,...
elected just 28 of their number to sit in the United Kingdom House of Lords
House of Lords
The House of Lords is the upper house of the Parliament of the United Kingdom. Like the House of Commons, it meets in the Palace of Westminster....
, described as the "representative peers". This practice ended in 1922 with the establishment of the Irish Free State
Irish Free State
The Irish Free State was the state established as a Dominion on 6 December 1922 under the Anglo-Irish Treaty, signed by the British government and Irish representatives exactly twelve months beforehand...
. Other newly-created Irish peers, such as Clive of India
Robert Clive, 1st Baron Clive
Major-General Robert Clive, 1st Baron Clive, KB , also known as Clive of India, was a British officer who established the military and political supremacy of the East India Company in Bengal. He is credited with securing India, and the wealth that followed, for the British crown...
and Lord Curzon, were able to stand for election to the UK House of Commons
British House of Commons
The House of Commons is the lower house of the Parliament of the United Kingdom, which also comprises the Sovereign and the House of Lords . Both Commons and Lords meet in the Palace of Westminster. The Commons is a democratically elected body, consisting of 650 members , who are known as Members...
(not being UK Peers
Peerage of the United Kingdom
The Peerage of the United Kingdom comprises most peerages created in the United Kingdom of Great Britain and Ireland after the Act of Union in 1801, when it replaced the Peerage of Great Britain...
), without giving them a seat in the British House of Lords. This was a convenient way of giving a title for reasons of prestige to someone who expected to sit in the British House of Commons.