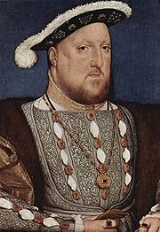 Supreme Governor of the Church of England
Topic Home
Discussion
0

By 1536 Henry VIII had broken with Rome, seized the church's assets in England and declared the Church of England
Church of England
The Church of England is the officially established Christian church in England and the Mother Church of the worldwide Anglican Communion. The church considers itself within the tradition of Western Christianity and dates its formal establishment principally to the mission to England by St...
as the established church with himself as its head. The Act of Supremacy 1534 confirmed the King's status as having supremacy over the church and required the nobility to swear an oath recognizing Henry's supremacy. Henry's daughter, Queen Mary I
Mary I of England
Mary I was queen regnant of England and Ireland from July 1553 until her death.She was the only surviving child born of the ill-fated marriage of Henry VIII and his first wife Catherine of Aragon. Her younger half-brother, Edward VI, succeeded Henry in 1547...
, attempted to restore the English Church's allegiance to the Pope and repealed the Act of Supremacy in 1555. Elizabeth took the throne in 1558 and, the next year, Parliament
Parliament of England
The Parliament of England was the legislature of the Kingdom of England. In 1066, William of Normandy introduced a feudal system, by which he sought the advice of a council of tenants-in-chief and ecclesiastics before making laws...
passed the Act of Supremacy 1559
Act of Supremacy 1559
The Act of Supremacy 1558 was an Act of the Parliament of England, passed under the auspices of Queen Elizabeth I of England. It replaced the original Act of Supremacy 1534 issued by Elizabeth's father, Henry VIII, which arrogated ecclesiastical authority to the monarchy, and which had been...
that restored the original act. However, to placate critics, the Oath of Supremacy
Oath of Supremacy
The Oath of Supremacy, originally imposed by King Henry VIII of England through the Act of Supremacy 1534, but repealed by his daughter, Queen Mary I of England and reinstated under Mary's sister, Queen Elizabeth I of England under the Act of Supremacy 1559, provided for any person taking public or...
, which nobles were required to swear, gave the monarch's title as Supreme Governor of the church rather than Supreme Head. This wording avoided the charge that the monarchy was claiming divinity or usurping Jesus
Jesus
Jesus of Nazareth , commonly referred to as Jesus Christ or simply as Jesus or Christ, is the central figure of Christianity...
Christ, whom the Bible identifies as head of the church.

"Defender of the Faith" (Fidei Defensor
Fidei defensor
Fidei defensor is a Latin title which translates to Defender of the Faith in English and Défenseur de la Foi in French...
) has been part of the British monarch's title since Henry VIII was originally granted it by Pope Leo X
Pope Leo X
Pope Leo X , born Giovanni di Lorenzo de' Medici, was the Pope from 1513 to his death in 1521. He was the last non-priest to be elected Pope. He is known for granting indulgences for those who donated to reconstruct St. Peter's Basilica and his challenging of Martin Luther's 95 Theses...
in 1521 in recognition of Henry's role in opposing the Protestant Reformation
Protestant Reformation
The Protestant Reformation was a 16th-century split within Western Christianity initiated by Martin Luther, John Calvin and other early Protestants. The efforts of the self-described "reformers", who objected to the doctrines, rituals and ecclesiastical structure of the Roman Catholic Church, led...
. The pope withdrew the title, but it was later reconferred by Parliament in the reign of Edward VI
Edward VI of England
Edward VI was the King of England and Ireland from 28 January 1547 until his death. He was crowned on 20 February at the age of nine. The son of Henry VIII and Jane Seymour, Edward was the third monarch of the Tudor dynasty and England's first monarch who was raised as a Protestant...
.

"Being by God's Ordinance, according to Our just Title, Defender of the Faith and Supreme Governor of the Church, within these Our Dominions, We hold it most agreeable to this Our Kingly Office, and Our own religious zeal, to conserve and maintain the Church committed to Our Charge, in Unity of true Religion, and in the Bond of Peace ... We have therefore, upon mature Deliberation, and with the Advice of so many of Our Bishops as might conveniently be called together, thought fit to make this Declaration following ... That We are Supreme Governor of the Church of England ... "

"The King's majesty hath the chief power in this Realm of England, and other of his Dominions, unto whom the chief Government of all Estates of this Realm, whether they be Ecclesiastical or Civil, in all causes doth appertain, and is not, nor ought to be, subject to any foreign jurisdiction ... We give not to our Princes the ministering either of God's Word, or of the Sacraments ... but that only prerogative, which we see to have been given always to all Godly Princes in holy Scriptures by God himself; that is, that they should rule all estates and degrees committed to their charge by God, whether they be Ecclesiastical or Temporal, and restrain with the civil sword the stubborn and evildoer ... The Bishop of Rome hath no jurisdiction in this Realm of England."