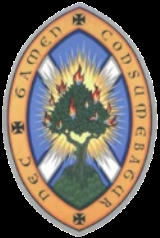 Overview
The Church of Scotland, known informally by its Scots language
Scots language
Scots is the Germanic language variety spoken in Lowland Scotland and parts of Ulster . It is sometimes called Lowland Scots to distinguish it from Scottish Gaelic, the Celtic language variety spoken in most of the western Highlands and in the Hebrides.Since there are no universally accepted...
name, the Kirk, is a Presbyterian
Presbyterianism
Presbyterianism refers to a number of Christian churches adhering to the Calvinist theological tradition within Protestantism, which are organized according to a characteristic Presbyterian polity. Presbyterian theology typically emphasizes the sovereignty of God, the authority of the Scriptures,...
church
Christian Church
The Christian Church is the assembly or association of followers of Jesus Christ. The Greek term ἐκκλησία that in its appearances in the New Testament is usually translated as "church" basically means "assembly"...
, decisively shaped by the Scottish Reformation
Scottish Reformation
The Scottish Reformation was Scotland's formal break with the Papacy in 1560, and the events surrounding this. It was part of the wider European Protestant Reformation; and in Scotland's case culminated ecclesiastically in the re-establishment of the church along Reformed lines, and politically in...
.

The Church of Scotland traces its roots back to the beginnings of Christianity in Scotland
Christianity in Medieval Scotland
Christianity in Medieval Scotland pertains to the Christian religion in Scotland in the Middle Ages. Prior to the Reformation in the early modern period, Scotland was a Roman Catholic country.-Early Christianity:...
, but its identity is principally shaped by the Reformation of 1560. Its current pledged membership is about 9% of the Scottish population
Demographics of Scotland
Scotland has a population of 5,222,100 . Covering an area of , Scotland has a population density of . Around 70% of the country's population live in the Central Lowlands — a broad, fertile valley stretching in a northeast-southwest orientation between the cities of Edinburgh and Glasgow, and...
—though according to the 2001 national census
United Kingdom Census 2001
A nationwide census, known as Census 2001, was conducted in the United Kingdom on Sunday, 29 April 2001. This was the 20th UK Census and recorded a resident population of 58,789,194....
, 42% of the Scottish population claim some form of allegiance to it (see Religion in Scotland
Religion in Scotland
Christianity is the largest religion in Scotland. At the 2001 census 65% of the Scottish population was Christian. The Church of Scotland, often known as The Kirk, is recognised in law as the national church of Scotland. It is not an established church and is independent of state control. However,...
).


The Church of Scotland has around 984 active minister
Minister of religion
In Christian churches, a minister is someone who is authorized by a church or religious organization to perform functions such as teaching of beliefs; leading services such as weddings, baptisms or funerals; or otherwise providing spiritual guidance to the community...
s, 1,179 congregations, and its official membership at approximately 464,000 comprises about 9% of the population of Scotland.

what are the main aspects of a sunday service for school work :)
More
x