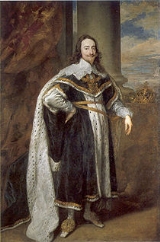 Overview
Charles I was King of England
Kingdom of England
The Kingdom of England was, from 927 to 1707, a sovereign state to the northwest of continental Europe. At its height, the Kingdom of England spanned the southern two-thirds of the island of Great Britain and several smaller outlying islands; what today comprises the legal jurisdiction of England...
, King of Scotland
Kingdom of Scotland
The Kingdom of Scotland was a Sovereign state in North-West Europe that existed from 843 until 1707. It occupied the northern third of the island of Great Britain and shared a land border to the south with the Kingdom of England...
, and King of Ireland
Kingdom of Ireland
The Kingdom of Ireland refers to the country of Ireland in the period between the proclamation of Henry VIII as King of Ireland by the Crown of Ireland Act 1542 and the Act of Union in 1800. It replaced the Lordship of Ireland, which had been created in 1171...
from 27 March 1625 until his execution in 1649. Charles engaged in a struggle for power with the Parliament of England
Parliament of England
The Parliament of England was the legislature of the Kingdom of England. In 1066, William of Normandy introduced a feudal system, by which he sought the advice of a council of tenants-in-chief and ecclesiastics before making laws...
, attempting to obtain royal revenue whilst Parliament sought to curb his Royal prerogative
Royal Prerogative
The royal prerogative is a body of customary authority, privilege, and immunity, recognized in common law and, sometimes, in civil law jurisdictions possessing a monarchy as belonging to the sovereign alone. It is the means by which some of the executive powers of government, possessed by and...
which Charles believed was divinely ordained
Divine Right of Kings
The divine right of kings or divine-right theory of kingship is a political and religious doctrine of royal and political legitimacy. It asserts that a monarch is subject to no earthly authority, deriving his right to rule directly from the will of God...
.

Was there a specific event in history in which Charles the First of England showed positive leadership skills?

When was he born
More

1625    Charles I becomes King of England, Scotland and Ireland as well as claiming the title King of France.

1628    Writs issued in February by Charles I of England mandate that every county in England (not just seaport towns) pay ship tax by this date.

1628    The Petition of Right, a major English constitutional document, is granted the Royal Assent by Charles I and becomes law.

1640    King Charles I of England dissolves the Short Parliament.

1640    The Treaty of Ripon is signed, restoring peace between Scotland and Charles I of England.

1642    From this date all honours granted by Charles I are retrospectively annulled by Parliament.