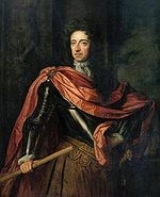 Overview
William III & II was a sovereign Prince of Orange
Prince of Orange
Prince of Orange is a title of nobility, originally associated with the Principality of Orange, in what is now southern France. In French it is la Principauté d'Orange....
of the House of Orange-Nassau
House of Orange-Nassau
The House of Orange-Nassau , a branch of the European House of Nassau, has played a central role in the political life of the Netherlands — and at times in Europe — since William I of Orange organized the Dutch revolt against Spanish rule, which after the Eighty Years' War...
by birth. From 1672 he governed as Stadtholder William III of Orange over Holland, Zeeland
Zeeland
Zeeland , also called Zealand in English, is the westernmost province of the Netherlands. The province, located in the south-west of the country, consists of a number of islands and a strip bordering Belgium. Its capital is Middelburg. With a population of about 380,000, its area is about...
, Utrecht
Utrecht (province)
Utrecht is the smallest province of the Netherlands in terms of area, and is located in the centre of the country. It is bordered by the Eemmeer in the north, Gelderland in the east, the river Rhine in the south, South Holland in the west, and North Holland in the northwest...
, Guelders
Guelders
Guelders or Gueldres is the name of a historical county, later duchy of the Holy Roman Empire, located in the Low Countries.-Geography:...
, and Overijssel
Overijssel
Overijssel is a province of the Netherlands in the central eastern part of the country. The region has a NUTS classification of NL21. The province's name means "Lands across river IJssel". The capital city of Overijssel is Zwolle and the largest city is Enschede...
of the Dutch Republic
Dutch Republic
The Dutch Republic — officially known as the Republic of the Seven United Netherlands , the Republic of the United Netherlands, or the Republic of the Seven United Provinces — was a republic in Europe existing from 1581 to 1795, preceding the Batavian Republic and ultimately...
. From 1689 he reigned as William III over England and Ireland
Monarchy of Ireland
A monarchical polity has existed in Ireland during three periods of its history, finally ending in 1801. The designation King of Ireland and Queen of Ireland was used during these periods...
. By coincidence, his regnal number (III) was the same for both Orange and England.

What are some fun facts about william?
More

1677    The future Mary II of England marries William, Prince of Orange. They would later jointly reign as William and Mary.

1687    The city council of Amsterdam votes to support William of Orange's invasion of England, which became the Glorious Revolution.

1689    William and Mary are proclaimed co-rulers of England.

1689    William III and Mary II are crowned as joint sovereigns of Britain.

1690    Battle of the Boyne (Gregorian calendar) &ndash; The armies of William III defeat those of the former James II.

1692    Massacre of Glencoe: About 78 Macdonalds at Glen Coe, Scotland are killed early in the morning for not promptly pledging allegiance to the new king, William of Orange.

Can this last long?

Famous last words|Last words, 19 March, 1702, when his doctor told him that he was ill.
More
x