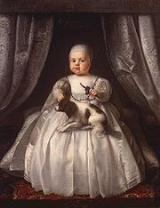 Charles II's father, King Charles I
Charles I of England
Charles I was King of England, King of Scotland, and King of Ireland from 27 March 1625 until his execution in 1649. Charles engaged in a struggle for power with the Parliament of England, attempting to obtain royal revenue whilst Parliament sought to curb his Royal prerogative which Charles...
, was executed at Whitehall
Palace of Whitehall
The Palace of Whitehall was the main residence of the English monarchs in London from 1530 until 1698 when all except Inigo Jones's 1622 Banqueting House was destroyed by fire...
on 30 January 1649, at the climax of the English Civil War
English Civil War
The English Civil War was a series of armed conflicts and political machinations between Parliamentarians and Royalists...
. Although the Parliament of Scotland
Parliament of Scotland
The Parliament of Scotland, officially the Estates of Parliament, was the legislature of the Kingdom of Scotland. The unicameral parliament of Scotland is first found on record during the early 13th century, with the first meeting for which a primary source survives at...
proclaimed Charles II King of Great Britain and Ireland in Edinburgh
Edinburgh
Edinburgh is the capital city of Scotland, the second largest city in Scotland, and the eighth most populous in the United Kingdom. The City of Edinburgh Council governs one of Scotland's 32 local government council areas. The council area includes urban Edinburgh and a rural area...
on 6 February 1649, the English Parliament instead passed a statute that made any such proclamation unlawful. England entered the period known as the English Interregnum
English Interregnum
The English Interregnum was the period of parliamentary and military rule by the Lord Protector Oliver Cromwell under the Commonwealth of England after the English Civil War...
or the English Commonwealth, and the country was a de facto republic, led by Oliver Cromwell
Oliver Cromwell
Oliver Cromwell was an English military and political leader who overthrew the English monarchy and temporarily turned England into a republican Commonwealth, and served as Lord Protector of England, Scotland, and Ireland....
.

How did Charles II maintain control over his government and people?

What were the best indicators of the level of power did Charles II possessed?
More

1660    Declaration of Breda by King Charles II of England.

1660    English Restoration: Charles II (on his birthday &ndash; see below) is restored to the throne of Great Britain.

1661    King Charles II of England, Scotland and Ireland is crowned in Westminster Abbey.

1661    Marriage contract between Charles II of England and Catherine of Braganza.

He had been, he said, an unconscionable time dying; but he hoped that they would excuse it.

On his deathbed, asking that his favourite mistress, Nell Gwynne|Nell Gwynne, be looked after.
More
x