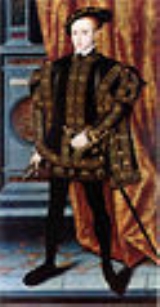 Overview
Edward VI was the King of England and Ireland
Monarchy of Ireland
A monarchical polity has existed in Ireland during three periods of its history, finally ending in 1801. The designation King of Ireland and Queen of Ireland was used during these periods...
from 28 January 1547 until his death. He was crowned on 20 February at the age of nine. The son of Henry VIII
Henry VIII of England
Henry VIII was King of England from 21 April 1509 until his death. He was Lord, and later King, of Ireland, as well as continuing the nominal claim by the English monarchs to the Kingdom of France...
and Jane Seymour
Jane Seymour
Jane Seymour was Queen of England as the third wife of King Henry VIII. She succeeded Anne Boleyn as queen consort following the latter's execution for trumped up charges of high treason, incest and adultery in May 1536. She died of postnatal complications less than two weeks after the birth of...
, Edward was the third monarch of the Tudor dynasty
Tudor dynasty
The Tudor dynasty or House of Tudor was a European royal house of Welsh origin that ruled the Kingdom of England and its realms, including the Lordship of Ireland, later the Kingdom of Ireland, from 1485 until 1603. Its first monarch was Henry Tudor, a descendant through his mother of a legitimised...
and England's first monarch who was raised as a Protestant. During Edward's reign, the realm was governed by a Regency Council
Regent
A regent, from the Latin regens "one who reigns", is a person selected to act as head of state because the ruler is a minor, not present, or debilitated. Currently there are only two ruling Regencies in the world, sovereign Liechtenstein and the Malaysian constitutive state of Terengganu...
, because he never reached maturity. The Council was first led by his uncle Edward Seymour, 1st Duke of Somerset
Edward Seymour, 1st Duke of Somerset
Edward Seymour, 1st Duke of Somerset, 1st Earl of Hertford, 1st Viscount Beauchamp of Hache, KG, Earl Marshal was Lord Protector of England in the period between the death of Henry VIII in 1547 and his own indictment in 1549....
, (1547–1549), and then by John Dudley, 1st Earl of Warwick
John Dudley, 1st Duke of Northumberland
John Dudley, 1st Duke of Northumberland, KG was an English general, admiral, and politician, who led the government of the young King Edward VI from 1550 until 1553, and unsuccessfully tried to install Lady Jane Grey on the English throne after the King's death...
, from 1551 Duke of Northumberland
Duke of Northumberland
The Duke of Northumberland is a title in the peerage of Great Britain that has been created several times. Since the third creation in 1766, the title has belonged to the House of Percy , which held the title of Earl of Northumberland from 1377....
(1550–1553).

Edward's reign was marked by economic problems and social unrest that, in 1549, erupted into riot and rebellion.

I say this with certain intention, I will see my laws strictly obeyed, and those who break them will be watched and denounced.

To his half-sister Mary I of England, who was ignoring his anti-Catholic laws.
More
x