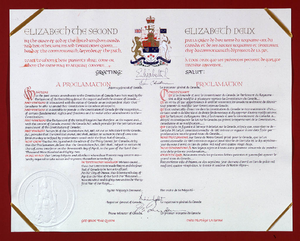 The title and style of the Canadian sovereign is the formal mode of address of the monarch of Canada. The form is based on those that were inherited from the United Kingdom
United Kingdom
The United Kingdom of Great Britain and Northern IrelandIn the United Kingdom and Dependencies, other languages have been officially recognised as legitimate autochthonous languages under the European Charter for Regional or Minority Languages...
and France
France
The French Republic , The French Republic , The French Republic , (commonly known as France , is a unitary semi-presidential republic in Western Europe with several overseas territories and islands located on other continents and in the Indian, Pacific, and Atlantic oceans. Metropolitan France...
, used in the colonies to refer to the reigning monarch in Europe
Europe
Europe is, by convention, one of the world's seven continents. Comprising the westernmost peninsula of Eurasia, Europe is generally 'divided' from Asia to its east by the watershed divides of the Ural and Caucasus Mountains, the Ural River, the Caspian and Black Seas, and the waterways connecting...
. As the possession of various Canadian territories changed ownership and then the country gained gradual independence, the style
Style (manner of address)
A style of office, or honorific, is a legal, official, or recognized title. A style, by tradition or law, precedes a reference to a person who holds a post or political office, and is sometimes used to refer to the office itself. An honorific can also be awarded to an individual in a personal...
and title of the monarchs changed almost as often at the kings and queens themselves. The mode of address currently employed is a combination of a style that originates in the early 17th century and a title established by Canadian law in 1953.


Title of the monarch

Although the Queen's Canadian title includes the phrase Defender of the Faith/Défenseur de la Foi, neither the monarch nor any of the viceroys have an official religious role in Canada. Unlike in the United Kingdom, where the term (Fidei defensor
Fidei defensor
Fidei defensor is a Latin title which translates to Defender of the Faith in English and Défenseur de la Foi in French...
, in Latin
Latin
Latin is an Italic language originally spoken in Latium and Ancient Rome. It, along with most European languages, is a descendant of the ancient Proto-Indo-European language. Although it is considered a dead language, a number of scholars and members of the Christian clergy speak it fluently, and...
) signifies the sovereign's position as Supreme Governor of the Church of England
Supreme Governor of the Church of England
The Supreme Governor of the Church of England is a title held by the British monarchs which signifies their titular leadership over the Church of England. Although the monarch's authority over the Church of England is not strong, the position is still very relevant to the church and is mostly...
and a member and defender of the security of the Church of Scotland
Church of Scotland
The Church of Scotland, known informally by its Scots language name, the Kirk, is a Presbyterian church, decisively shaped by the Scottish Reformation....
, there have been no established churches in Canada since before its confederation
Canadian Confederation
Canadian Confederation was the process by which the federal Dominion of Canada was formed on July 1, 1867. On that day, three British colonies were formed into four Canadian provinces...
in 1867. Defender of the Faith thus has a more vague meaning in the Canadian title, alluding only to the monarch's belief in a higher power. Prime Minister Louis St. Laurent
Louis St. Laurent
Louis Stephen St. Laurent, PC, CC, QC , was the 12th Prime Minister of Canada from 15 November 1948, to 21 June 1957....
stated on this matter in his 1953 contribution to the debate on the Royal Style and Titles Act in the House of Commons
Canadian House of Commons
The House of Commons of Canada is a component of the Parliament of Canada, along with the Sovereign and the Senate. The House of Commons is a democratically elected body, consisting of 308 members known as Members of Parliament...
: "The rather more delicate question arose about the retention of the words defender of the faith... In our countries [Canada and the other non-British monarchies of the Commonwealth] there are no established churches, but in our countries there are people who have faith in the direction of human affairs by an all-wise Providence; and we felt that it was a good thing that the civil authorities would proclaim that their organization is such that it is a defence of the continued beliefs in a supreme power that orders the affairs of mere men, and that there could be no reasonable objection from anyone who believed in the Supreme Being in having the sovereign, the head of the civil authority, described as a believer in and a defender of the faith in a supreme ruler.


Style of the monarch

The use of the styles Highness and Majesty originated in the United Kingdom, where they were used from the 12th century onward. During the reign of James VI of Scotland and I of England and Ireland
James I of England
James VI and I was King of Scots as James VI from 24 July 1567 and King of England and Ireland as James I from the union of the English and Scottish crowns on 24 March 1603...
, however, Majesty became the official style, to the exclusion of all others, and was then brought to North America
North America
North America is a continent wholly within the Northern Hemisphere and almost wholly within the Western Hemisphere. It is also considered a northern subcontinent of the Americas...
during colonial times through usage in reference to the British monarch
Monarchy of the United Kingdom
The monarchy of the United Kingdom is the constitutional monarchy of the United Kingdom and its overseas territories. The present monarch, Queen Elizabeth II, has reigned since 6 February 1952. She and her immediate family undertake various official, ceremonial and representational duties...
, who then had sovereignty over the colonies on that continent
British North America
British North America is a historical term. It consisted of the colonies and territories of the British Empire in continental North America after the end of the American Revolutionary War and the recognition of American independence in 1783.At the start of the Revolutionary War in 1775 the British...
. Its usage has continued since Canada became a kingdom
Monarchy
A monarchy is a form of government in which the office of head of state is usually held until death or abdication and is often hereditary and includes a royal house. In some cases, the monarch is elected...
in its own right in 1867, and after a process of constitutional evolution ending with full sovereignty from the United Kingdom, is now applied to the Canadian monarch. Unlike in the United Kingdom, where the sovereign is referred to in treaties and on British passport
Passport
A passport is a document, issued by a national government, which certifies, for the purpose of international travel, the identity and nationality of its holder. The elements of identity are name, date of birth, sex, and place of birth....
s as Her [His] Britannic Majesty, the sovereign in Canada is referred to simply as Her [His] Majesty (Sa Majesté). However, from time to time, the style will be Her [His] Canadian Majesty so as to differentiate from foreign sovereigns.

Following Canadian Confederation
Canadian Confederation
Canadian Confederation was the process by which the federal Dominion of Canada was formed on July 1, 1867. On that day, three British colonies were formed into four Canadian provinces...
, Prime Minister of Canada John A. Macdonald
John A. Macdonald
Sir John Alexander Macdonald, GCB, KCMG, PC, PC , QC was the first Prime Minister of Canada. The dominant figure of Canadian Confederation, his political career spanned almost half a century...
, having been denied the name Kingdom of Canada for the new country, was repeatedly heard to refer to Queen Victoria
Victoria of the United Kingdom
Victoria was the monarch of the United Kingdom of Great Britain and Ireland from 20 June 1837 until her death. From 1 May 1876, she used the additional title of Empress of India....
as the Queen of Canada, and, similarly, in the lead up to the coronation
Coronation
A coronation is a ceremony marking the formal investiture of a monarch and/or their consort with regal power, usually involving the placement of a crown upon their head and the presentation of other items of regalia...
of King Edward VII
Edward VII of the United Kingdom
Edward VII was King of the United Kingdom and the British Dominions and Emperor of India from 22 January 1901 until his death in 1910...
in 1902, Prime Minister Wilfrid Laurier
Wilfrid Laurier
Sir Wilfrid Laurier, GCMG, PC, KC, baptized Henri-Charles-Wilfrid Laurier was the seventh Prime Minister of Canada from 11 July 1896 to 6 October 1911....
desired to have the words King of Canada included in the royal title by the time of the ceremony. This wish was not fulfilled, however, and Canada inherited the full British title when the country gained legislative independence from the United Kingdom in 1931.

When the act to alter the Queen's title was in 1953 debated in the House of Commons, Louis St. Laurent asserted on the nature of the separate and shared characteristics of the Crown
The Crown
The Crown is a corporation sole that in the Commonwealth realms and any provincial or state sub-divisions thereof represents the legal embodiment of governance, whether executive, legislative, or judicial...
: "Her Majesty is now Queen of Canada but she is the Queen of Canada because she is Queen of the United Kingdom... It is not a separate office." Parliament then unanimously passed the new Royal Style and Titles Act, which was granted Royal Assent
Royal Assent
The granting of royal assent refers to the method by which any constitutional monarch formally approves and promulgates an act of his or her nation's parliament, thus making it a law...
and proclaimed by Governor General
Governor General of Canada
The Governor General of Canada is the federal viceregal representative of the Canadian monarch, Queen Elizabeth II...
Vincent Massey
Vincent Massey
Charles Vincent Massey was a Canadian lawyer and diplomat who served as Governor General of Canada, the 18th since Canadian Confederation....
on 29 May 1953, just four days before Elizabeth II was crowned
Coronation of Queen Elizabeth II
The Coronation of Queen Elizabeth II was the ceremony in which the newly ascended monarch, Elizabeth II, was crowned Queen of the United Kingdom, Canada, Australia, New Zealand, South Africa, Ceylon, and Pakistan, as well as taking on the role of Head of the Commonwealth...
. The new legislation conferred publicly and legally the concept of a unique constitutional monarchy
Constitutional monarchy
Constitutional monarchy is a form of government in which a monarch acts as head of state within the parameters of a constitution, whether it be a written, uncodified or blended constitution...
for Canada, thereby fulfilling the vision of the Fathers of Confederation. A subsequent Royal Style and Titles Act was passed in 1985, though it did not alter the Queen's title in any way.