Encyclopedia
Saint Peter's Square is located directly in front of St. Peter's Basilica
St. Peter's Basilica
The Papal Basilica of Saint Peter , officially known in Italian as ' and commonly known as Saint Peter's Basilica, is a Late Renaissance church located within the Vatican City. Saint Peter's Basilica has the largest interior of any Christian church in the world...
in Vatican City
Vatican City
Vatican City , or Vatican City State, in Italian officially Stato della Città del Vaticano , which translates literally as State of the City of the Vatican, is a landlocked sovereign city-state whose territory consists of a walled enclave within the city of Rome, Italy. It has an area of...
, the papal
Pope
The Pope is the Bishop of Rome, a position that makes him the leader of the worldwide Catholic Church . In the Catholic Church, the Pope is regarded as the successor of Saint Peter, the Apostle...
enclave
Enclave and exclave
In political geography, an enclave is a territory whose geographical boundaries lie entirely within the boundaries of another territory.An exclave, on the other hand, is a territory legally or politically attached to another territory with which it is not physically contiguous.These are two...
within Rome
Rome
Rome is the capital of Italy and the country's largest and most populated city and comune, with over 2.7 million residents in . The city is located in the central-western portion of the Italian Peninsula, on the Tiber River within the Lazio region of Italy.Rome's history spans two and a half...
(the Piazza borders to the East the rione
Rione
Rione is the name given to a ward in several Italian cities, the best-known of which is Rome. Unlike a quartiere, a rione is usually an official administrative subdivision...
of Borgo
Borgo (rione of Rome)
Borgo , is the 14th historic district of Rome, Italy. It lies on the west bank of the Tiber, and has a trapezoidal shape. Its coat of arms shows a lion , lying in front of three mounts and a star...
).

The open space which lies before the basilica was redesigned by Gian Lorenzo Bernini
Gian Lorenzo Bernini
Gian Lorenzo Bernini was an Italian artist who worked principally in Rome. He was the leading sculptor of his age and also a prominent architect...
from 1656 to 1667, under the direction of Pope Alexander VII
Pope Alexander VII
Pope Alexander VII , born Fabio Chigi, was Pope from 7 April 1655, until his death.- Early life :Born in Siena, a member of the illustrious banking family of Chigi and a great-nephew of Pope Paul V , he was privately tutored and eventually received doctorates of philosophy, law, and theology from...
, as an appropriate forecourt, designed "so that the greatest number of people could see the Pope give his blessing, either from the middle of the façade of the church or from a window in the Vatican Palace" (Norwich 1975 p 175). Bernini had been working on the interior of St. Peter's for decades; now he gave order to the space with his renowned colonnade
Colonnade
In classical architecture, a colonnade denotes a long sequence of columns joined by their entablature, often free-standing, or part of a building....
s, using the Tuscan
Tuscan order
Among canon of classical orders of classical architecture, the Tuscan order's place is due to the influence of the Italian Sebastiano Serlio, who meticulously described the five orders including a "Tuscan order", "the solidest and least ornate", in his fourth book of Regole generalii di...
form of Doric
Doric order
The Doric order was one of the three orders or organizational systems of ancient Greek or classical architecture; the other two canonical orders were the Ionic and the Corinthian.-History:...
, the simplest order in the classical vocabulary, not to compete with the palace-like façade by Carlo Maderno
Carlo Maderno
Carlo Maderno was a Swiss-Italian architect, born in Ticino, who is remembered as one of the fathers of Baroque architecture. His façades of Santa Susanna, St. Peter's Basilica and Sant'Andrea della Valle were of key importance in the evolution of the Italian Baroque...
, but he employed it on an unprecedented colossal scale to suit the space and evoke emotions awe. 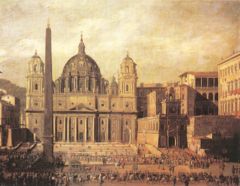 The site's possibilities were under many constraints from existing structures (illustration, right). The massed accretions of the Vatican Palace
Apostolic Palace
The Apostolic Palace is the official residence of the Pope, which is located in Vatican City. It is also known as the Sacred Palace, the Papal Palace and the Palace of the Vatican...
crowded the space to the right of the basilica's façade; the structures needed to be masked without obscuring the papal apartments. The obelisk
Obelisk
An obelisk is a tall, four-sided, narrow tapering monument which ends in a pyramid-like shape at the top, and is said to resemble a petrified ray of the sun-disk. A pair of obelisks usually stood in front of a pylon...
marked a center, and a granite fountain by Carlo Maderno
Carlo Maderno
Carlo Maderno was a Swiss-Italian architect, born in Ticino, who is remembered as one of the fathers of Baroque architecture. His façades of Santa Susanna, St. Peter's Basilica and Sant'Andrea della Valle were of key importance in the evolution of the Italian Baroque...
stood to one side: Bernini made the fountain appear to be one of the foci of the ovato tondo embraced by his colonnades and eventually matched it on the other side, in 1675, just five years before his death. The trapezoid
Trapezoid
In Euclidean geometry, a convex quadrilateral with one pair of parallel sides is referred to as a trapezoid in American English and as a trapezium in English outside North America. A trapezoid with vertices ABCD is denoted...
al shape of the piazza, which creates a heightened perspective
Perspective (visual)
Perspective, in context of vision and visual perception, is the way in which objects appear to the eye based on their spatial attributes; or their dimensions and the position of the eye relative to the objects...
for a visitor leaving the basilica and has been praised as a masterstroke of Baroque
Baroque
The Baroque is a period and the style that used exaggerated motion and clear, easily interpreted detail to produce drama, tension, exuberance, and grandeur in sculpture, painting, literature, dance, and music...
theater (illustration, below right), is largely a product of site constraints.

The colossal Tuscan colonnades, four columns deep, frame the trapezoidal entrance to the basilica and the massive elliptical area which precedes it. The ovato tondo's long axis, parallel to the basilica's façade, creates a pause in the sequence of forward movements that is characteristic of a Baroque monumental approach. The colonnades define the piazza. The elliptical center of the piazza, which contrasts with the trapezoidal entrance, encloses the visitor with "the maternal arms of Mother Church" in Bernini's expression. On the south side, the colonnades define and formalize the space, with the Barberini Gardens still rising to a skyline of umbrella pines. On the north side, the colonnade masks an assortment of Vatican structures; the upper stories of the Vatican Palace rise above. 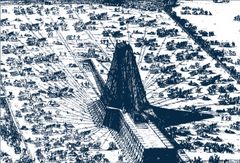 At the center of the ovato tondo stands an Egyptian obelisk of red granite
Granite
Granite is a common and widely occurring type of intrusive, felsic, igneous rock. Granite usually has a medium- to coarse-grained texture. Occasionally some individual crystals are larger than the groundmass, in which case the texture is known as porphyritic. A granitic rock with a porphyritic...
, 25.5 meters tall, supported on bronze lions and surmounted by the Chigi arms in bronze, in all 41 meters to the cross
Christian cross
The Christian cross, seen as a representation of the instrument of the crucifixion of Jesus Christ, is the best-known religious symbol of Christianity...
on its top. It was originally erected at Heliopolis
Heliopolis (ancient)
Heliopolis was one of the oldest cities of ancient Egypt, the capital of the 13th Lower Egyptian nome that was located five miles east of the Nile to the north of the apex of the Nile Delta...
by an unknown pharaoh of the Fifth dynasty of Egypt
Fifth dynasty of Egypt
The fifth dynasty of ancient Egypt is often combined with Dynasties III, IV and VI under the group title the Old Kingdom. Dynasty V dates approximately from 2494 to 2345 BC.-Rulers:...
. The Emperor Augustus
Augustus
Augustus ;23 September 63 BC – 19 August AD 14) is considered the first emperor of the Roman Empire, which he ruled alone from 27 BC until his death in 14 AD.The dates of his rule are contemporary dates; Augustus lived under two calendars, the Roman Republican until 45 BC, and the Julian...
had it moved to the Julian Forum of Alexandria
Alexandria
Alexandria is the second-largest city of Egypt, with a population of 4.1 million, extending about along the coast of the Mediterranean Sea in the north central part of the country; it is also the largest city lying directly on the Mediterranean coast. It is Egypt's largest seaport, serving...
, where it stood until year 37 A.D., when Caligula
Caligula
Caligula , also known as Gaius, was Roman Emperor from 37 AD to 41 AD. Caligula was a member of the house of rulers conventionally known as the Julio-Claudian dynasty. Caligula's father Germanicus, the nephew and adopted son of Emperor Tiberius, was a very successful general and one of Rome's most...
ordered the forum demolished and the obelisk transferred to Rome. He placed it in the center of the Circus, where it would preside over Nero's countless brutal games and Christian executions.
It was moved to its current site in 1586 by the engineer-architect Domenico Fontana
Domenico Fontana
Domenico Fontana was a Swiss-born Italian architect of the late Renaissance.-Biography:200px|thumb|Fountain of Moses in Rome....
under the direction of Pope Sixtus V
Pope Sixtus V
Pope Sixtus V , born Felice Peretti di Montalto, was Pope from 1585 to 1590.-Early life:The chronicler Andrija Zmajević states that Felice's family originated from modern-day Montenegro...
; the engineering feat of re-erecting its vast weight was memorialized in a suite of engravings (illustrated right). The Vatican Obelisk is the only obelisk in Rome
Obelisks in Rome
The city of Rome harbours the most obelisks in the world. There are eight ancient Egyptian and five ancient Roman obelisks in Rome, together with a number of more modern obelisks; there was also formerly an ancient Ethiopian obelisk in Rome....
that has not toppled since ancient Roman
Ancient Rome
Ancient Rome was a thriving civilization that grew on the Italian Peninsula as early as the 8th century BC. Located along the Mediterranean Sea and centered on the city of Rome, it expanded to one of the largest empires in the ancient world....
times. During the Middle Ages, the gilt ball on top of the obelisk was believed to contain the ashes of Julius Caesar
Julius Caesar
Gaius Julius Caesar was a Roman general and statesman and a distinguished writer of Latin prose. He played a critical role in the gradual transformation of the Roman Republic into the Roman Empire....
. Fontana later removed the ancient metal ball, now in a Rome museum, that stood atop the obelisk and found only dust. Though Bernini had no influence in the erection of the obelisk, he did use it as the centerpiece of his magnificent piazza.