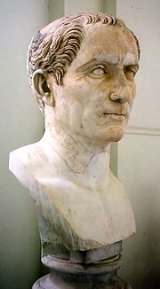 Overview
Gaius Julius Caesar (July 100 BC – 15 March 44 BC) was a Roman general and statesman
Statesman
A statesman is usually a politician or other notable public figure who has had a long and respected career in politics or government at the national and international level. As a term of respect, it is usually left to supporters or commentators to use the term...
and a distinguished writer of Latin
Latin
Latin is an Italic language originally spoken in Latium and Ancient Rome. It, along with most European languages, is a descendant of the ancient Proto-Indo-European language. Although it is considered a dead language, a number of scholars and members of the Christian clergy speak it fluently, and...
prose. He played a critical role in the gradual transformation of the Roman Republic
Roman Republic
The Roman Republic was the period of the ancient Roman civilization where the government operated as a republic. It began with the overthrow of the Roman monarchy, traditionally dated around 508 BC, and its replacement by a government headed by two consuls, elected annually by the citizens and...
into the Roman Empire
Roman Empire
The Roman Empire was the post-Republican period of the ancient Roman civilization, characterised by an autocratic form of government and large territorial holdings in Europe and around the Mediterranean....
.

In 60 BC, Caesar, Crassus
Marcus Licinius Crassus
Marcus Licinius Crassus was a Roman general and politician who commanded the right wing of Sulla's army at the Battle of the Colline Gate, suppressed the slave revolt led by Spartacus, provided political and financial support to Julius Caesar and entered into the political alliance known as the...
and Pompey
Pompey
Gnaeus Pompeius Magnus, also known as Pompey or Pompey the Great , was a military and political leader of the late Roman Republic...
formed a political alliance
First Triumvirate
The First Triumvirate was the political alliance of Gaius Julius Caesar, Marcus Licinius Crassus, and Gnaeus Pompeius Magnus. Unlike the Second Triumvirate, the First Triumvirate had no official status whatsoever; its overwhelming power in the Roman Republic was strictly unofficial influence, and...
that was to dominate Roman politics for several years. Their attempts to amass power through populist
Populares
Populares were aristocratic leaders in the late Roman Republic who relied on the people's assemblies and tribunate to acquire political power. They are regarded in modern scholarship as in opposition to the optimates, who are identified with the conservative interests of a senatorial elite...
tactics were opposed by the conservative elite
Optimates
The optimates were the traditionalist majority of the late Roman Republic. They wished to limit the power of the popular assemblies and the Tribunes of the Plebs, and to extend the power of the Senate, which was viewed as more dedicated to the interests of the aristocrats who held the reins of power...
within the Roman Senate
Roman Senate
The Senate of the Roman Republic was a political institution in the ancient Roman Republic, however, it was not an elected body, but one whose members were appointed by the consuls, and later by the censors. After a magistrate served his term in office, it usually was followed with automatic...
, among them Cato the Younger
Cato the Younger
Marcus Porcius Cato Uticensis , commonly known as Cato the Younger to distinguish him from his great-grandfather , was a politician and statesman in the late Roman Republic, and a follower of the Stoic philosophy...
with the frequent support of Cicero
Cicero
Marcus Tullius Cicero , was a Roman philosopher, statesman, lawyer, political theorist, and Roman constitutionalist. He came from a wealthy municipal family of the equestrian order, and is widely considered one of Rome's greatest orators and prose stylists.He introduced the Romans to the chief...
.

how was the conflict among him and pompey
More

What other authors accounted his life and times?

Was Caesar his real name or was it given to him otherwise?

What do you think julius caeser would think about 1. medical advances 2.technological advance 3.leisure 4. food today 5. government and military
More

52 BC   Vercingetorix, leader of the Gauls, surrenders to the Romans under Julius Caesar, ending the siege and Battle of Alesia.

49 BC   Julius Caesar crosses the Rubicon, signaling the start of civil war.

49 BC   Julius Caesar's general Gaius Scribonius Curio is defeated in the Second Battle of the Bagradas River by the Numidians under Publius Attius Varus and King Juba of Numidia. Curio commits suicide to avoid capture.

48 BC   Battle of Dyrrhachium: Julius Caesar barely avoids a catastrophic defeat to Pompey in Macedonia.

46 BC   Julius Caesar defeats Titus Labienus in the Battle of Ruspina.

46 BC   Julius Caesar defeats Caecilius Metellus Scipio and Marcus Porcius Cato (Cato the Younger) in the battle of Thapsus.

46 BC   Julius Caesar dedicates a temple to his mythical ancestor Venus Genetrix in accordance with a vow he made at the battle of Pharsalus.

45 BC   In his last victory, Julius Caesar defeats the Pompeian forces of Titus Labienus and Pompey the Younger in the Battle of Munda.

44 BC   Julius Caesar, Dictator of the Roman Republic, is stabbed to death by Marcus Junius Brutus, Gaius Cassius Longinus, Decimus Junius Brutus and several other Roman senators on the Ides of March.

Of all these, the Belgians are the bravest/strongest .

Men willingly believe what they wish.

Fortune, which has a great deal of power in other matters but especially in war, can bring about great changes in a situation through very slight forces.

We have not to fear anything, except fear itself.
More
x