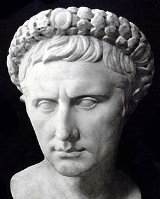 Overview
Augustus is considered the first emperor of the Roman Empire
Roman Empire
The Roman Empire was the post-Republican period of the ancient Roman civilization, characterised by an autocratic form of government and large territorial holdings in Europe and around the Mediterranean....
, which he ruled alone from 27 BC until his death in 14 AD. Born Gaius Octavius Thurinus, he was adopted
Adoption in Ancient Rome
In ancient Rome, adoption of boys was a fairly common procedure, particularly in the upper senatorial class. The need for a male heir and the expense of raising children were strong incentives to have at least one son, but not too many children. Adoption, the obvious solution, also served to...
posthumously by his great-uncle Gaius Julius Caesar
Julius Caesar
Gaius Julius Caesar was a Roman general and statesman and a distinguished writer of Latin prose. He played a critical role in the gradual transformation of the Roman Republic into the Roman Empire....
in 44 BC via his last will and testament, and between then and 27 BC was officially named Gaius Julius Caesar.

If we could survive without a wife, citizens of Rome, all of us would do without that nuisance; but since nature has so decreed that we cannot manage comfortably with them, nor live in any way without them, we must plan for our lasting preservation rather than for our temporary pleasure.

If I have played my part well, clap your hands, and dismiss me with applause from the stage.

At the age of nineteen, on my own initiative and at my own expense, I raised an army by means of which I restored liberty to the republic, which had been oppressed by the tyranny of a faction. For which service the senate, with complimentary resolutions, enrolled me in its order...

Referring to the faction of Mark Antony|Marcus Antonius.

Those who slew my father I drove into exile, punishing their deed by due process of law, and afterwards when they waged war upon the republic I twice defeated them in battle.

Wars, both civil and foreign, I undertook throughout the world, on sea and land, and when victorious I spared all citizens who sued for pardon. The foreign nations which could with safety be pardoned I preferred to save rather than to destroy.

I declined to be made Pontifex Maximus|Pontifex Maximus in succession to a colleague still living, when the people tendered me that priesthood which my father had held. Several years later I accepted that sacred office when he at last was dead who, taking advantage of a time of civil disturbance, had seized it for himself, such a multitude from all Italy assembling for my election, in the consulship of Publius Sulpicius and Gaius Valgius, as is never recorded to have been in Rome before.