The gnomon is the part of a sundial
Sundial
A sundial is a device that measures time by the position of the Sun. In common designs such as the horizontal sundial, the sun casts a shadow from its style onto a surface marked with lines indicating the hours of the day. The style is the time-telling edge of the gnomon, often a thin rod or a...
that casts the shadow
Shadow
A shadow is an area where direct light from a light source cannot reach due to obstruction by an object. It occupies all of the space behind an opaque object with light in front of it. The cross section of a shadow is a two-dimensional silhouette, or reverse projection of the object blocking the...
. Gnomon (γνώμων) is an ancient Greek
Ancient Greek
Ancient Greek is the stage of the Greek language in the periods spanning the times c. 9th–6th centuries BC, , c. 5th–4th centuries BC , and the c. 3rd century BC – 6th century AD of ancient Greece and the ancient world; being predated in the 2nd millennium BC by Mycenaean Greek...
word meaning "indicator", "one who discerns," or "that which reveals."

It has come to be used for a variety of purposes in mathematics and other fields.


Uses of the term 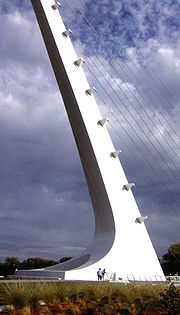 The Chinese
China
Chinese civilization may refer to:* China for more general discussion of the country.* Chinese culture* Greater China, the transnational community of ethnic Chinese.* History of China* Sinosphere, the area historically affected by Chinese culture...
also used the gnomon, mentioned in the 2nd century Nine Chapters on the Mathematical Art as being used much earlier by the Duke of Zhou
Duke of Zhou
The Duke of Zhou played a major role in consolidating the newly-founded Zhou Dynasty . He was the brother of King Wu of Zhou, the first king of the ancient Chinese Zhou Dynasty...
(11th century BC).

In the northern hemisphere
Northern Hemisphere
The Northern Hemisphere is the half of a planet that is north of its equator—the word hemisphere literally means “half sphere”. It is also that half of the celestial sphere north of the celestial equator...
, the shadow-casting edge is normally oriented so that it points north and is parallel to the rotation axis of the Earth
Earth
Earth is the third planet from the Sun, and the densest and fifth-largest of the eight planets in the Solar System. It is also the largest of the Solar System's four terrestrial planets...
. That is, it is inclined to the horizontal at an angle
Angle
In geometry, an angle is the figure formed by two rays sharing a common endpoint, called the vertex of the angle.Angles are usually presumed to be in a Euclidean plane with the circle taken for standard with regard to direction. In fact, an angle is frequently viewed as a measure of an circular arc...
that equals the latitude
Latitude
In geography, the latitude of a location on the Earth is the angular distance of that location south or north of the Equator. The latitude is an angle, and is usually measured in degrees . The equator has a latitude of 0°, the North pole has a latitude of 90° north , and the South pole has a...
of the sundial's location. At present, such a gnomon should thus point almost precisely at Polaris
Polaris
Polaris |Alpha]] Ursae Minoris, commonly North Star or Pole Star, also Lodestar) is the brightest star in the constellation Ursa Minor. It is very close to the north celestial pole, making it the current northern pole star....
, as this is within a degree of the North celestial pole
Celestial pole
The north and south celestial poles are the two imaginary points in the sky where the Earth's axis of rotation, indefinitely extended, intersects the imaginary rotating sphere of stars called the celestial sphere...
.

On some sundials, the gnomon is vertical. These were usually used in former times for observing the altitude
Altitude
Altitude or height is defined based on the context in which it is used . As a general definition, altitude is a distance measurement, usually in the vertical or "up" direction, between a reference datum and a point or object. The reference datum also often varies according to the context...
of the Sun
Sun
The Sun is the star at the center of the Solar System. It is almost perfectly spherical and consists of hot plasma interwoven with magnetic fields...
, especially when on the meridian
Meridian (geography)
A meridian is an imaginary line on the Earth's surface from the North Pole to the South Pole that connects all locations along it with a given longitude. The position of a point along the meridian is given by its latitude. Each meridian is perpendicular to all circles of latitude...
. The style is the part of the gnomon that casts the shadow. This can change as the sun moves. For example, the upper west edge of the gnomon might be the style in the morning and the upper east edge might be the style in the afternoon.

The art of constructing a gnomon sundial is sometimes termed gnomonics. One so skilled would be referred to as a gnomonist.

Gnomon is the name given to an aesthetic process utilized by James Joyce
James Joyce
James Augustine Aloysius Joyce was an Irish novelist and poet, considered to be one of the most influential writers in the modernist avant-garde of the early 20th century...
in his set of short stories Dubliners
Dubliners
Dubliners is a collection of 15 short stories by James Joyce, first published in 1914. They were meant to be a naturalistic depiction of Irish middle class life in and around Dublin in the early years of the 20th century....
, whereby the whole of the character is revealed by a single part.

In a recent book Gazalé, Midhat J.
Midhat J. Gazalé
Midhat Gazalé is an international telecommunications and space consultant and a visiting Professor of Telecommunications and Computer Management at the University of Paris IX...
coined the term gnomonicity as a synonym for the contemporary idea of Self-similarity
Self-similarity
In mathematics, a self-similar object is exactly or approximately similar to a part of itself . Many objects in the real world, such as coastlines, are statistically self-similar: parts of them show the same statistical properties at many scales...
both in the increasing and decreasing scale as in fractals.

In the book The Tower at the End of the World by Brad Strickland
Brad Strickland
William Bradley Strickland is an American author known primarily for his fantasy and science fiction. He was born in New Holland, Georgia....
, a giant tower
Tower
A tower is a tall structure, usually taller than it is wide, often by a significant margin. Towers are distinguished from masts by their lack of guy-wires....
and thin stairs turn out to be the gnomon of a giant sundial. The island the tower is found on is often called "Gnomon Island".

The Gnomon of Saint-Sulpice
Gnomon of Saint-Sulpice
The Gnomon of Saint-Sulpice is an astronomical measurement device located in the Church of Saint-Sulpice in Paris, France. It is a gnomon, a device designed to cast a shadow on the ground in order to determine the position of the sun in the sky...
inside the church of Saint Sulpice
Saint-Sulpice (Paris)
Saint-Sulpice is a Roman Catholic church in Paris, France, on the east side of the Place Saint-Sulpice, in the Luxembourg Quarter of the VIe arrondissement. At 113 metres long, 58 metres in width and 34 metres tall, it is only slightly smaller than Notre-Dame and thus the second largest church in...
in Paris, France, built to assist in determining the date of Easter
Easter
Easter is the central feast in the Christian liturgical year. According to the Canonical gospels, Jesus rose from the dead on the third day after his crucifixion. His resurrection is celebrated on Easter Day or Easter Sunday...
, was fictionalized as a "Rose Line
Rose Line
Rose Line is a fictional name given to the Paris Meridian and to the sunlight line defining the exact time of Easter on the Gnomon of Saint-Sulpice, marked by a brass strip on the floor of the church in the Priory of Sion mythology, where the two are conflated.The fictional name Rose Line was also...
" in the novel The Da Vinci Code
The Da Vinci Code
The Da Vinci Code is a 2003 mystery-detective novel written by Dan Brown. It follows symbologist Robert Langdon and Sophie Neveu as they investigate a murder in Paris's Louvre Museum and discover a battle between the Priory of Sion and Opus Dei over the possibility of Jesus having been married to...
.
The source of this article is wikipedia, the free encyclopedia.  The text of this article is licensed under the GFDL.