Carlo Maderno (1556 – 30 January 1629) was a Swiss
Switzerland
Switzerland name of one of the Swiss cantons. ; ; ; or ), in its full name the Swiss Confederation , is a federal republic consisting of 26 cantons, with Bern as the seat of the federal authorities. The country is situated in Western Europe,Or Central Europe depending on the definition....
-Italian
Italy
Italy , officially the Italian Republic languages]] under the European Charter for Regional or Minority Languages. In each of these, Italy's official name is as follows:;;;;;;;;), is a unitary parliamentary republic in South-Central Europe. To the north it borders France, Switzerland, Austria and...
architect
Architect
An architect is a person trained in the planning, design and oversight of the construction of buildings. To practice architecture means to offer or render services in connection with the design and construction of a building, or group of buildings and the space within the site surrounding the...
, born in Ticino
Ticino
Canton Ticino or Ticino is the southernmost canton of Switzerland. Named after the Ticino river, it is the only canton in which Italian is the sole official language...
, who is remembered as one of the fathers of Baroque architecture
Baroque architecture
Baroque architecture is a term used to describe the building style of the Baroque era, begun in late sixteenth century Italy, that took the Roman vocabulary of Renaissance architecture and used it in a new rhetorical and theatrical fashion, often to express the triumph of the Catholic Church and...
. His façades of Santa Susanna
Santa Susanna
The Church of Saint Susanna at the baths of Diocletian is a Roman Catholic parish church on the Quirinal Hill in Rome, with a titulus associated to its site that dates back to about 280...
, St. Peter's Basilica
St. Peter's Basilica
The Papal Basilica of Saint Peter , officially known in Italian as ' and commonly known as Saint Peter's Basilica, is a Late Renaissance church located within the Vatican City. Saint Peter's Basilica has the largest interior of any Christian church in the world...
and Sant'Andrea della Valle
Sant'Andrea della Valle
Sant'Andrea della Valle is a basilica church in Rome, Italy, in the rione of Sant'Eustachio. The basilica is the general seat for the religious order of the Theatines.-Overview:...
were of key importance in the evolution of the Italian Baroque
Baroque
The Baroque is a period and the style that used exaggerated motion and clear, easily interpreted detail to produce drama, tension, exuberance, and grandeur in sculpture, painting, literature, dance, and music...
. He is often referred to as the brother of sculptor Stefano Maderno
Stefano Maderno
Stefano Maderno was an Italian sculptor.-Biography:News about Maderno's life are scarce and often contradictory...
, but this is not universally agreed upon.

Born in Capolago
Capolago
Capolago was a municipality in the district of Mendrisio in the canton of Ticino in Switzerland, but is now part of the municipality of Mendrisio. On 25 November 2007 the municipalities of Arzo, Capolago, Genestrerio, Mendrisio, Rancate and Tremona voted to merge into the municipality of Mendrisio...
, Ticino (an Italian-speaking canton of Switzerland), Maderno began his career in the marble
Marble
Marble is a metamorphic rock composed of recrystallized carbonate minerals, most commonly calcite or dolomite.Geologists use the term "marble" to refer to metamorphosed limestone; however stonemasons use the term more broadly to encompass unmetamorphosed limestone.Marble is commonly used for...
quarries of the far north, before moving to Rome in 1588 with four of his brothers to assist his uncle Domenico Fontana
Domenico Fontana
Domenico Fontana was a Swiss-born Italian architect of the late Renaissance.-Biography:200px|thumb|Fountain of Moses in Rome....
. He worked initially as a marble cutter, and his background in sculptural workmanship would help mold his architecture. His first solo project, in 1596, was an utterly confident and mature façade for the ancient church of Santa Susanna
Santa Susanna
The Church of Saint Susanna at the baths of Diocletian is a Roman Catholic parish church on the Quirinal Hill in Rome, with a titulus associated to its site that dates back to about 280...
(1597–1603); it was among the first Baroque
Baroque
The Baroque is a period and the style that used exaggerated motion and clear, easily interpreted detail to produce drama, tension, exuberance, and grandeur in sculpture, painting, literature, dance, and music...
façades to break with the Mannerist
Mannerism
Mannerism is a period of European art that emerged from the later years of the Italian High Renaissance around 1520. It lasted until about 1580 in Italy, when a more Baroque style began to replace it, but Northern Mannerism continued into the early 17th century throughout much of Europe...
conventions that are exemplified in the Gesù
Church of the Gesu
The Church of the Gesù is the mother church of the Society of Jesus, a Roman Catholic religious order also known as the Jesuits. Officially named , its facade is "the first truly baroque façade", introducing the baroque style into architecture ,. The church served as model for innumerable Jesuit...
. The structure is a dynamic rhythm of columns and pilasters, with a protruding central bay and condensed central decoration add complexity to the structure. There is an incipient playfulness with the rules of classic design, still maintaining rigor.

The Santa Susanna façade won the attention of Pope Paul V
Pope Paul V
-Theology:Paul met with Galileo Galilei in 1616 after Cardinal Bellarmine had, on his orders, warned Galileo not to hold or defend the heliocentric ideas of Copernicus. Whether there was also an order not to teach those ideas in any way has been a matter for controversy...
, who in 1603 appointed him chief architect of St Peter's
St. Peter's Basilica
The Papal Basilica of Saint Peter , officially known in Italian as ' and commonly known as Saint Peter's Basilica, is a Late Renaissance church located within the Vatican City. Saint Peter's Basilica has the largest interior of any Christian church in the world...
. Maderno was forced to modify Michelangelo
Michelangelo
Michelangelo di Lodovico Buonarroti Simoni , commonly known as Michelangelo, was an Italian Renaissance painter, sculptor, architect, poet, and engineer who exerted an unparalleled influence on the development of Western art...
's plans for the Basilica and provide designs for an extended nave with a palatial façade. The façade (completed 1612) is constructed to allow for Papal blessings from the emphatically enriched balcony above the central door. This forward extension of the basilica (which grew from Michelangelo's Greek cross to the present Latin cross) has been criticized because it blocks the view of the dome when seen from the Piazza, often ignores the fact that the approaching avenue is modern. Maderno would not have had liberties to design this building as much as in other structures. 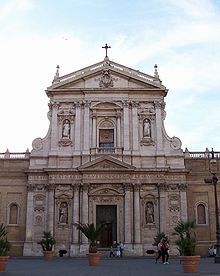 Even Maderno's masterpiece, the church of Sant'Andrea della Valle
Sant'Andrea della Valle
Sant'Andrea della Valle is a basilica church in Rome, Italy, in the rione of Sant'Eustachio. The basilica is the general seat for the religious order of the Theatines.-Overview:...
, is not entirely his. There he designed the façade and executed the dome, the second largest in the Roman skyline. The church itself had been designed for the Theatines
Theatines
The Theatines or the Congregation of Clerks Regular of the Divine Providence are a male religious order of the Catholic Church, with the post-nominal initials "C.R."-Foundation:...
by Giuseppe Francesco Grimaldi and Giacomo della Porta
Giacomo della Porta
Giacomo della Porta was an Italian architect and sculptor, who worked on many important buildings in Rome, including St. Peter's Basilica. He was born at Porlezza, Lombardy and died in Rome.-Biography:...
in 1540: it follows a familiar Jesuit plan, cruciform, its wide nave without aisles, with chapels beyond arched openings. The crossing
Crossing (architecture)
A crossing, in ecclesiastical architecture, is the junction of the four arms of a cruciform church.In a typically oriented church , the crossing gives access to the nave on the west, the transept arms on the north and south, and the choir on the east.The crossing is sometimes surmounted by a tower...
contains the high altar, lit under Maderno's dome (frescoed by Giovanni Lanfranco
Giovanni Lanfranco
Giovanni Lanfranco was an Italian painter of the Baroque period.-Biography:Giovanni Gaspare Lanfranco was born in Parma, the third son of Stefano and Cornelia Lanfranchi, and was placed as a page in the household of Count Orazio Scotti...
1621—25) on its high windowed drum. The earliest design is of 1608; construction took from 1621 to 1625. At Maderno's death, the façade remained half built; it was completed to Maderno's original conception by Carlo Fontana
Carlo Fontana
Carlo Fontana was an Italian architect, who was in part responsible for the classicizing direction taken by Late Baroque Roman architecture.-Biography:...
. In this façade, the standard formula established at Il Gesù
Church of the Gesu
The Church of the Gesù is the mother church of the Society of Jesus, a Roman Catholic religious order also known as the Jesuits. Officially named , its facade is "the first truly baroque façade", introducing the baroque style into architecture ,. The church served as model for innumerable Jesuit...
is given more movement and depth—in the varying planes of the frieze and cornice—and increased chiaroscuro
Chiaroscuro
Chiaroscuro in art is "an Italian term which literally means 'light-dark'. In paintings the description refers to clear tonal contrasts which are often used to suggest the volume and modelling of the subjects depicted"....
—as in the whole columns embedded in snug dark recesses that outline their profiles with shadow—, and in similar elements that are re-grouped for a tighter, more sprung rhythm.

His other works include the Roman churches of Gesù e Maria, San Giacomo degli Incurabili, Santa Lucia in Selci and San Giovanni dei Fiorentini
San Giovanni dei Fiorentini
San Giovanni dei Fiorentini, St John of the Florentines, is a church in the Ponte rione or district of Rome. Dedicated to St John the Baptist, the protector of Florence, the new church for the Florentine community in Rome was started in the 16th century and completed in early eighteenth and is the...
(where he is buried). In addition, he worked on the Quirinal Palace
Quirinal Palace
The Quirinal Palace is a historical building in Rome, Italy, the current official residence of the President of the Italian Republic. It is located on the Quirinal Hill, the tallest of the seven hills of Rome...
, the Papal palace in Castel Gandolfo
Castel Gandolfo
Castel Gandolfo is a small Italian town or comune in Lazio that occupies a height overlooking Lake Albano about 15 miles south-east of Rome, on the Alban Hills. It is best known as the summer residence of the Pope. It is an Italian town with the population of 8834...
and the Palazzo Barberini
Palazzo Barberini
Palazzo Barberini is a palace in Rome, facing the piazza of the same name in Rione Trevi and is home to the Galleria Nazionale d'Arte Antica.-History:...
and for the Barberini
Barberini
The Barberini are a family of the Italian nobility that rose to prominence in 17th century Rome. Their influence peaked with the election of Cardinal Maffeo Barberini to the papal throne in 1623, as Pope Urban VIII...
Pope Urban VIII
Pope Urban VIII
Pope Urban VIII , born Maffeo Barberini, was pope from 1623 to 1644. He was the last pope to expand the papal territory by force of arms, and was a prominent patron of the arts and reformer of Church missions...
(1628 and completed 1633; much remodeled since). In the Palazzo Barberini at Quattro Fontane
Quattro Fontane
The Quattro Fontane is a group of four Late Renaissance fountains located at the intersection of Via delle Quattro Fontane and Via del Quirinale in Rome. They were commissioned by Pope Sixtus V and built at the direction of Muzio Mattei; installed between 1588 and 1593...
, Maderno's work is overshadowed at times by details added by Bernini and Borromini. His design of palaces is best represented by his design of Palazzo Mattei
Palazzo Mattei
thumb|250px|right|The courtyard of the Palazzo Mattei di Giove.The Palazzo Mattei di Giove is the most prominent among a group of Mattei houses that forms the insula Mattei in Rome, Italy, a block of buildings of many epochs...
(1598–1616).