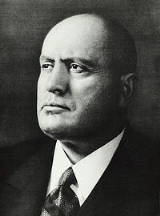 Mussolini became the 40th Prime Minister of Italy
Prime minister of Italy
The Prime Minister of Italy is the head of government of the Italian Republic...
in 1922 and began using the title Il Duce
Duce
Duce is an Italian title, derived from the Latin word dux, and cognate with duke. National Fascist Party leader Benito Mussolini was identified by Fascists as Il Duce of the movement and became a reference to the dictator position of Head of Government and Duce of Fascism of Italy was established...
by 1925. After 1936, his official title was Sua Eccellenza Benito Mussolini, Capo del Governo, Duce del Fascismo e Fondatore dell'Impero ("His Excellency Benito Mussolini, Head of Government, Duce of Fascism, and Founder of the Empire") Mussolini also created and held the supreme military rank of First Marshal of the Empire
First Marshal of the Empire
First marshal of the empire was a military rank established by the Italian Parliament on March 30, 1938. The highest rank in the Italian Military, it was only granted to Benito Mussolini and King Victor Emmanuel III...
along with King Victor Emmanuel III of Italy
Victor Emmanuel III of Italy
Victor Emmanuel III was a member of the House of Savoy and King of Italy . In addition, he claimed the crowns of Ethiopia and Albania and claimed the titles Emperor of Ethiopia and King of Albania , which were unrecognised by the Great Powers...
, which gave him and the King joint supreme control over the military of Italy.

Did mussolini have and racial attitudes

How was fascism unusual in the political climate of the time?

Why did the people accept fascism?

Did mussolini have any racial attitudes ?

The creation of fascism

The national flag is a rag that should be placed in a dunghill.

During his youth as a socialist, as quoted in Cracking the AP European History Exam, Kenneth Pearl (2008)

Let us have a dagger between our teeth, a bomb in our hands and an infinite scorn in our hearts.

The Fascist accepts life and loves it, knowing nothing of and despising suicide; he rather conceives of life as duty and struggle and conquest, life which should be high and full, lived for oneself, but not above all for others — those who are at hand and those who are far distant, contemporaries, and those who will come after.

Speeches made to the people are essential to the arousing of enthusiasm for a war.

Quoted in Talks with Mussolini (1932) by Emil Ludwig

I owe most to Georges Sorel|Georges Sorel. This master of syndicalism by his rough theories of revolutionary tactics has contributed most to form the discipline, energy and power of the fascist cohorts.

Quoted in The New Inquistions by Arthur Versluis