Ramphotyphlops braminus is a harmless blind snake
Typhlopidae
The Typhlopidae are a family of blind snakes. They are found mostly in the tropical regions of Africa, Asia, the Americas, and all mainland Australia and various islands. The rostral scale overhangs the mouth to form a shovel like burrowing structure. They live underground in burrows, and since...
species
Species
In biology, a species is one of the basic units of biological classification and a taxonomic rank. A species is often defined as a group of organisms capable of interbreeding and producing fertile offspring. While in many cases this definition is adequate, more precise or differing measures are...
found mostly in Africa
Africa
Africa is the world's second largest and second most populous continent, after Asia. At about 30.2 million km² including adjacent islands, it covers 6% of the Earth's total surface area and 20.4% of the total land area...
and Asia
Asia
Asia is the world's largest and most populous continent, located primarily in the eastern and northern hemispheres. It covers 8.7% of the Earth's total surface area and with approximately 3.879 billion people, it hosts 60% of the world's current human population...
, but has been introduced in many other parts of the world. Completely fossorial
Fossorial
A fossorial organism is one that is adapted to digging and life underground such as the badger, the naked mole rat, and the mole salamanders Ambystomatidae...
, they are often mistaken for earthworm
Earthworm
Earthworm is the common name for the largest members of Oligochaeta in the phylum Annelida. In classical systems they were placed in the order Opisthopora, on the basis of the male pores opening posterior to the female pores, even though the internal male segments are anterior to the female...
s, except that they are not segmented. The specific name is a Latinized form of the word Brahmin
Brahmin
Brahmin Brahman, Brahma and Brahmin.Brahman, Brahmin and Brahma have different meanings. Brahman refers to the Supreme Self...
, which is a caste among Hindus. No subspecies
Subspecies
Subspecies in biological classification, is either a taxonomic rank subordinate to species, ora taxonomic unit in that rank . A subspecies cannot be recognized in isolation: a species will either be recognized as having no subspecies at all or two or more, never just one...
are currently recognized.

Adults are small and thin, averaging between 6.35-16.5 cm (2½ to 6½ inches) in length. The head and tail-tip look much the same, with no narrowing of the neck. The rudimentary eyes appear only as a pair of small dots under the head scales. The tip of the tail ends with a tiny pointed spur. The head scales are small and resemble those on the body. There are 14 rows of dorsal scales
Dorsal scales
In snakes, the dorsal scales are the longitudinal series of plates that encircle the body, but do not include the ventral scales.When counting dorsal scales, numbers are often given for three points along the body, for example 19:21:17...
along the entire body. The coloration of the adults varies from shiny silver gray to charcoal gray or purple. The venter is grayish to brown. Juveniles are colored much the same as the adults.

The tiny eyes are covered with translucent scales
Scale (zoology)
In most biological nomenclature, a scale is a small rigid plate that grows out of an animal's skin to provide protection. In lepidopteran species, scales are plates on the surface of the insect wing, and provide coloration...
, rendering these snakes almost entirely blind. The eyes cannot form images, but are still capable of registering light intensity.

Found in Africa
Africa
Africa is the world's second largest and second most populous continent, after Asia. At about 30.2 million km² including adjacent islands, it covers 6% of the Earth's total surface area and 20.4% of the total land area...
and Asia
Asia
Asia is the world's largest and most populous continent, located primarily in the eastern and northern hemispheres. It covers 8.7% of the Earth's total surface area and with approximately 3.879 billion people, it hosts 60% of the world's current human population...
, but being an introduced species in many parts of the world, it is also found in Australia
Australia
Australia , officially the Commonwealth of Australia, is a country in the Southern Hemisphere comprising the mainland of the Australian continent, the island of Tasmania, and numerous smaller islands in the Indian and Pacific Oceans. It is the world's sixth-largest country by total area...
and the Americas
Americas
The Americas, or America , are lands in the Western hemisphere, also known as the New World. In English, the plural form the Americas is often used to refer to the landmasses of North America and South America with their associated islands and regions, while the singular form America is primarily...
. It is common throughout most of Florida http://www.flmnh.ufl.edu/herpetology/fl-guide/ramphotyphlopsbraminus.htm

In Africa, it has been reported in Benin
Benin
Benin , officially the Republic of Benin, is a country in West Africa. It borders Togo to the west, Nigeria to the east and Burkina Faso and Niger to the north. Its small southern coastline on the Bight of Benin is where a majority of the population is located...
, Togo
Togo
Togo, officially the Togolese Republic , is a country in West Africa bordered by Ghana to the west, Benin to the east and Burkina Faso to the north. It extends south to the Gulf of Guinea, on which the capital Lomé is located. Togo covers an area of approximately with a population of approximately...
, Ivory Coast, Cameroon
Cameroon
Cameroon, officially the Republic of Cameroon , is a country in west Central Africa. It is bordered by Nigeria to the west; Chad to the northeast; the Central African Republic to the east; and Equatorial Guinea, Gabon, and the Republic of the Congo to the south. Cameroon's coastline lies on the...
, Somalia
Somalia
Somalia , officially the Somali Republic and formerly known as the Somali Democratic Republic under Socialist rule, is a country located in the Horn of Africa. Since the outbreak of the Somali Civil War in 1991 there has been no central government control over most of the country's territory...
, Zanzibar
Zanzibar
Zanzibar ,Persian: زنگبار, from suffix bār: "coast" and Zangi: "bruin" ; is a semi-autonomous part of Tanzania, in East Africa. It comprises the Zanzibar Archipelago in the Indian Ocean, off the coast of the mainland, and consists of numerous small islands and two large ones: Unguja , and Pemba...
, coastal Tanzania
Tanzania
The United Republic of Tanzania is a country in East Africa bordered by Kenya and Uganda to the north, Rwanda, Burundi, and the Democratic Republic of the Congo to the west, and Zambia, Malawi, and Mozambique to the south. The country's eastern borders lie on the Indian Ocean.Tanzania is a state...
, Mozambique
Mozambique
Mozambique, officially the Republic of Mozambique , is a country in southeastern Africa bordered by the Indian Ocean to the east, Tanzania to the north, Malawi and Zambia to the northwest, Zimbabwe to the west and Swaziland and South Africa to the southwest...
, South Africa
South Africa
The Republic of South Africa is a country in southern Africa. Located at the southern tip of Africa, it is divided into nine provinces, with of coastline on the Atlantic and Indian oceans...
(an isolated colony in Cape Town
Cape Town
Cape Town is the second-most populous city in South Africa, and the provincial capital and primate city of the Western Cape. As the seat of the National Parliament, it is also the legislative capital of the country. It forms part of the City of Cape Town metropolitan municipality...
), Madagascar
Madagascar
The Republic of Madagascar is an island country located in the Indian Ocean off the southeastern coast of Africa...
, the Comoro Islands
Comoro Islands
The Comoros Islands form an archipelago of volcanic islands situated off the south-east coast of Africa, to the east of Mozambique and north-west of Madagascar. They are divided between the sovereign state of Comoros and the French overseas department of Mayotte...
, Mauritius
Mauritius
Mauritius , officially the Republic of Mauritius is an island nation off the southeast coast of the African continent in the southwest Indian Ocean, about east of Madagascar...
, the Mascarene Islands
Mascarene Islands
The Mascarene Islands is a group of islands in the Indian Ocean east of Madagascar comprising Mauritius, Réunion, Rodrigues, Cargados Carajos shoals, plus the former islands of the Saya de Malha, Nazareth and Soudan banks...
and the Seychelles
Seychelles
Seychelles , officially the Republic of Seychelles , is an island country spanning an archipelago of 115 islands in the Indian Ocean, some east of mainland Africa, northeast of the island of Madagascar....
. 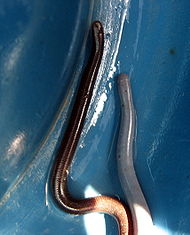 Usually occur in urban and agricultural areas. These snakes live underground in ant
Ant
Ants are social insects of the family Formicidae and, along with the related wasps and bees, belong to the order Hymenoptera. Ants evolved from wasp-like ancestors in the mid-Cretaceous period between 110 and 130 million years ago and diversified after the rise of flowering plants. More than...
and termite
Termite
Termites are a group of eusocial insects that, until recently, were classified at the taxonomic rank of order Isoptera , but are now accepted as the epifamily Termitoidae, of the cockroach order Blattodea...
nests. They are also found under logs, moist leaves and humus in wet forest, dry jungle and even city gardens. The distribution and survival of this group of snakes directly reflects soil humidity
Humidity
Humidity is a term for the amount of water vapor in the air, and can refer to any one of several measurements of humidity. Formally, humid air is not "moist air" but a mixture of water vapor and other constituents of air, and humidity is defined in terms of the water content of this mixture,...
and temperature
Temperature
Temperature is a physical property of matter that quantitatively expresses the common notions of hot and cold. Objects of low temperature are cold, while various degrees of higher temperatures are referred to as warm or hot...
.

This species is parthenogenetic
Parthenogenesis
Parthenogenesis is a form of asexual reproduction found in females, where growth and development of embryos occur without fertilization by a male...
and all specimens collected so far have been female. They lay eggs or may bear live young. Up to eight offspring are produced: all female and all genetically identical.