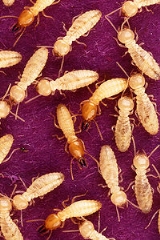 Overview
Termites are a group of eusocial
Eusociality
Eusociality is a term used for the highest level of social organization in a hierarchical classification....
insect
Insect
Insects are a class of living creatures within the arthropods that have a chitinous exoskeleton, a three-part body , three pairs of jointed legs, compound eyes, and two antennae...
s that, until recently, were classified at the taxonomic rank
Taxonomy
Taxonomy is the science of identifying and naming species, and arranging them into a classification. The field of taxonomy, sometimes referred to as "biological taxonomy", revolves around the description and use of taxonomic units, known as taxa...
of order
Order (biology)
In scientific classification used in biology, the order is# a taxonomic rank used in the classification of organisms. Other well-known ranks are life, domain, kingdom, phylum, class, family, genus, and species, with order fitting in between class and family...
Isoptera (see taxonomy below), but are now accepted as the epifamily Termitoidae, of the cockroach order Blattodea. While termites are commonly known, especially in Australia
Australia
Australia , officially the Commonwealth of Australia, is a country in the Southern Hemisphere comprising the mainland of the Australian continent, the island of Tasmania, and numerous smaller islands in the Indian and Pacific Oceans. It is the world's sixth-largest country by total area...
, as "white ants," they are only distantly related to the ants.

Like ant
Ant
Ants are social insects of the family Formicidae and, along with the related wasps and bees, belong to the order Hymenoptera. Ants evolved from wasp-like ancestors in the mid-Cretaceous period between 110 and 130 million years ago and diversified after the rise of flowering plants. More than...
s, some bee
Bee
Bees are flying insects closely related to wasps and ants, and are known for their role in pollination and for producing honey and beeswax. Bees are a monophyletic lineage within the superfamily Apoidea, presently classified by the unranked taxon name Anthophila...
s, and wasp
Wasp
The term wasp is typically defined as any insect of the order Hymenoptera and suborder Apocrita that is neither a bee nor an ant. Almost every pest insect species has at least one wasp species that preys upon it or parasitizes it, making wasps critically important in natural control of their...
s—which are all placed in the separate order Hymenoptera
Hymenoptera
Hymenoptera is one of the largest orders of insects, comprising the sawflies, wasps, bees and ants. There are over 130,000 recognized species, with many more remaining to be described. The name refers to the heavy wings of the insects, and is derived from the Ancient Greek ὑμήν : membrane and...
—termites divide labour among castes, produce overlapping generations and take care of young collectively.