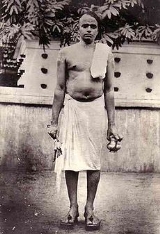 Overview
Brahmin (Sanskrit
Sanskrit
Sanskrit , is a historical Indo-Aryan language and the primary liturgical language of Hinduism, Jainism and Buddhism.Buddhism: besides Pali, see Buddhist Hybrid Sanskrit Today, it is listed as one of the 22 scheduled languages of India and is an official language of the state of Uttarakhand...
: )
is a name used to designate a member of one of the four varnas in the traditional Hindu society. The English word brahmin is an anglicised form of the Sanskrit word a.

It is well known to everybody that the bramin community has two main division i.e. panch goud and panch dravida.Panch goud has five division out of wh...

Hey can somebody tell if a person having a title as kela is a brahmin or not?

I wanted to know origin of kanyakubja brahmins and kanyakubja and modh bhrahmins are belongs to same community? please tell me.

What happened Brahmins vadhyar/purohit/pandit in Kerala?

How can the looting in the name of tradition be eradicated at the piligrimage centres, by the purohits as these aspects will cascade to the devastatio...
More

Who Are superior brahmins among jharua and oriya?

Encyclopedia
Brahmin (Sanskrit
Sanskrit
Sanskrit , is a historical Indo-Aryan language and the primary liturgical language of Hinduism, Jainism and Buddhism.Buddhism: besides Pali, see Buddhist Hybrid Sanskrit Today, it is listed as one of the 22 scheduled languages of India and is an official language of the state of Uttarakhand...
: )
is a name used to designate a member of one of the four varnas in the traditional Hindu society. The English word brahmin is an anglicised form of the Sanskrit word a. In the Smriti
Smriti
Smriti literally "that which is remembered," refers to a specific body of Hindu religious scripture, and is a codified component of Hindu customary law. Smṛti also denotes non-Śruti texts and is generally seen as secondary in authority to Śruti. The literature which comprises the Smrti was...
view there are four "varnas", or classes: the Brahmins, the Kshatriya
Kshatriya
*For the Bollywood film of the same name see Kshatriya Kshatriya or Kashtriya, meaning warrior, is one of the four varnas in Hinduism...
s, the Vaishya
Vaishya
Vaishya is one of the four varnas of the Hindu social order. According to Vedic tradition, this caste primarily comprises merchants, farmers, cattle-herders and artisans.-Duties of Vaishyas:...
s, and Shudra
Shudra
Shudra is the fourth Varna, as prescribed in the Purusha Sukta of the Rig veda, which constitutes society into four varnas or Chaturvarna. The other three varnas are Brahmans - priests, Kshatriya - those with governing functions, Vaishya - agriculturalists, cattle rearers and traders...
s.

Traditionally Brahmins were fire-priests who adhered to different branches (shakhas) of Vedas. However, historically, the semantic change from a tribal state into the Hindu state of jati-varna matrix saw the conversion and absorption of tribals into the Brahmin class, through adoption of the priestly occupation later. In Medieval and Colonial India, people in mundane occupations have also proselytized themselves into Brahmins, usually upon gaining positions of power or upon becoming wealthy.

The Smritis conferred upon the Brahmins, the position of being the highest of the four Varnas. The priestly class was expected to practice self-abnegation and play the role of being the custodians of Dharma
Dharma
Dharma means Law or Natural Law and is a concept of central importance in Indian philosophy and religion. In the context of Hinduism, it refers to one's personal obligations, calling and duties, and a Hindu's dharma is affected by the person's age, caste, class, occupation, and gender...
(as a Brāhman who is well versed in Vedic texts). However, the fee paid to the Brahmana for performance of a sacrifice was grossly material.

Most sampradaya
Sampradaya
In Hinduism, a sampradaya can be translated as ‘tradition’ or a ‘religious system’, although the word commands much more respect and power in the Indian context than its translations in English does...
s (sects) of modern Brahmins claim to take inspiration from the Vedas. According to orthodox Hindu tradition, the Vedas are and anādi (beginning-less), and are revealed truths of eternal validity.

The Vedas are considered Śruti ("that which is heard") and are the paramount source on which Brahmin tradition claims to be based. Shruti includes not only the four Vedas (the Rigveda
Rigveda
The Rigveda is an ancient Indian sacred collection of Vedic Sanskrit hymns...
, the Yajurveda
Yajurveda
The Yajurveda, a tatpurusha compound of "sacrificial formula', + ) is the third of the four canonical texts of Hinduism, the Vedas. By some, it is estimated to have been composed between 1400 and 1000 BC, the Yajurveda 'Samhita', or 'compilation', contains the liturgy needed to perform the...
, the Samaveda
Samaveda
The Sama veda , is second of the four Vedas, the ancient core Hindu scriptures. Its earliest parts are believed to date from 1700 BC and it ranks next in sanctity and liturgical importance to the Rigveda...
and the Atharvaveda
Atharvaveda
The Atharvaveda is a sacred text of Hinduism and one of the four Vedas, often called the "fourth Veda"....
), but also their respective Brahmanas, Aranyakas and Upanishads.

In 1931, Brahmins accounted for 9% of the total population. In Andhra Pradesh
Andhra Pradesh
Andhra Pradesh , is one of the 28 states of India, situated on the southeastern coast of India. It is India's fourth largest state by area and fifth largest by population. Its capital and largest city by population is Hyderabad.The total GDP of Andhra Pradesh is $100 billion and is ranked third...
, they formed less than 2%; in Tamil Nadu
Tamil Nadu
Tamil Nadu is one of the 28 states of India. Its capital and largest city is Chennai. Tamil Nadu lies in the southernmost part of the Indian Peninsula and is bordered by the union territory of Pondicherry, and the states of Kerala, Karnataka, and Andhra Pradesh...
they formed less than 3%. In Kerala
Kerala
or Keralam is an Indian state located on the Malabar coast of south-west India. It was created on 1 November 1956 by the States Reorganisation Act by combining various Malayalam speaking regions....
, Nambudiri Brahmins make up 0.7% of the population. In West Bengal too the figures stand the same, whereas in Uttar Prdesh, Himachal Pradesh, Rajasthan, Bihar and Orissa the brahmin population is quite near 10%.

The Brahmin castes may be broadly divided into two regional groups: Pancha-Gauda
Pancha-Gauda
Pancha-Gauda and Pancha-Dravida are two chief divisions of Brahmins, as per the śloka from Rājatarangini of / Kalhana:कर्णाटकाश्च तैलंगा द्राविडा महाराष्ट्रकाः ,गुर्जराश्चेति पञ्चैव द्राविडा विन्ध्यदक्षिणे ||सारस्वताः कान्यकुब्जा गौडा उत्कलमैथिलाः,...
Brahmins from Northern India and considered to be North of Vindhya mountains and Pancha-Dravida Brahmins from South of Vindhya mountains as per the shloka
Shloka
A ' is a category of verse line developed from the Vedic Anuṣṭubh. It is the basis for Indian Epic verse, and may be considered the Indian verse form par excellence, occurring, as it does, far more frequently than any other meter in classical Sanskrit poetry. The Mahabharata and Ramayana, for...
. However, this sloka is from Rajatarangini of Kalhana, which was composed only in the 11th century CE.

Translation: Karnataka (Kannada), Telugu (Andhra), Dravida (Tamil and Kerala), Maharashtra and Gujarat are Five Southern (Panch Dravida). Saraswata (Punjab,Kashmir & Sindh), Kanyakubja (Uttar Pradesh), Gauda (Kurukshetra and Rajasthan), Utkala (Orissa), Maithili (Bihar) are Five Northern (Pancha Gauda). This classification occurs in Rajatarangini
Rajatarangini
The Rājatarangiṇī is a metrical chronicle of North west of the Indian subcontinent particularly the kings of Kashmir from earliest time written in Sanskrit by Kalhaṇa. The Rājatarangiṇī often has been erroneously referred to as the River of the Kings. In reality what Kalhana means by Rājatarangiṇī...
of Kalhana
Kalhana
Kalhana , a Kashmiri, was the author of Rajatarangini , an account of the history of Kashmir. He wrote the work in Sanskrit between 1148 and 1149. All information regarding his life has to be deduced from his own writing, a major scholar of which is Mark Aurel Stein...
and earlier in some inscriptions

Those from Uttarapatha
Uttarapatha
Ancient Buddhist and Hindu texts use Uttarapatha as the name of the northern part of Jambudvipa, one of the "continents" in Hindu mythology.The name is derived from the Sanskrit terms uttara, for north, and patha, for road...
(Aryavarta) (northern
North India
North India, known natively as Uttar Bhārat or Shumālī Hindustān , is a loosely defined region in the northern part of India. The exact meaning of the term varies by usage...
and eastern India.) Approximately ordered according to geographical regions.