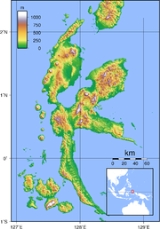 Encyclopedia
Halmahera is the largest island
Island
An island or isle is any piece of sub-continental land that is surrounded by water. Very small islands such as emergent land features on atolls can be called islets, cays or keys. An island in a river or lake may be called an eyot , or holm...
in the Maluku Islands
Maluku Islands
The Maluku Islands are an archipelago that is part of Indonesia, and part of the larger Maritime Southeast Asia region. Tectonically they are located on the Halmahera Plate within the Molucca Sea Collision Zone...
. It is part of the North Maluku
North Maluku
North Maluku is a province of northeastern Indonesia. It covers the northern part of the Maluku Islands, which are split between it and the province of Maluku. Maluku province used to cover the entire group...
province
Provinces of Indonesia
The province is the highest tier of local government subnational entity in Indonesia. Each province has its own local government, headed by a governor, and has its own legislative body...
of Indonesia
Indonesia
Indonesia , officially the Republic of Indonesia , is a country in Southeast Asia and Oceania. Indonesia is an archipelago comprising approximately 13,000 islands. It has 33 provinces with over 238 million people, and is the world's fourth most populous country. Indonesia is a republic, with an...
.

Halmahera has a land area of 17,780 km² (6,865 sq mi) and a population in 1995 of 162,728. About half of its inhabitants are Muslim
Muslim
A Muslim, also spelled Moslem, is an adherent of Islam, a monotheistic, Abrahamic religion based on the Quran, which Muslims consider the verbatim word of God as revealed to prophet Muhammad. "Muslim" is the Arabic term for "submitter" .Muslims believe that God is one and incomparable...
and about half are Christian
Christianity
Christianity is a monotheistic religion based on the life and teachings of Jesus as presented in canonical gospels and other New Testament writings...
. 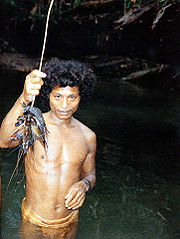 Sparsely-populated Halmahera's fortunes have long been closely tied to those of the smaller islands of Ternate
Ternate
Ternate is an island in the Maluku Islands of eastern Indonesia. It is located off the west coast of the larger island of Halmahera, the center of the powerful former Sultanate of Ternate....
and Tidore
Tidore
Tidore is a city, island, and archipelago in the Maluku Islands of eastern Indonesia, west of the larger island of Halmahera. In the pre-colonial era, the kingdom of Tidore was a major regional political and economic power, and a fierce rival of nearby Ternate, just to the north.-Geography:Tidor...
, both off its west coast. These islands were both the sites of major kingdoms in the era before Dutch East India Company
Dutch East India Company
The Dutch East India Company was a chartered company established in 1602, when the States-General of the Netherlands granted it a 21-year monopoly to carry out colonial activities in Asia...
colonized
Colonialism
Colonialism is the establishment, maintenance, acquisition and expansion of colonies in one territory by people from another territory. It is a process whereby the metropole claims sovereignty over the colony and the social structure, government, and economics of the colony are changed by...
the entire archipelago.

During World War II
World War II
World War II, or the Second World War , was a global conflict lasting from 1939 to 1945, involving most of the world's nations—including all of the great powers—eventually forming two opposing military alliances: the Allies and the Axis...
, Halmahera was the site of a Japan
Japan
Japan is an island nation in East Asia. Located in the Pacific Ocean, it lies to the east of the Sea of Japan, China, North Korea, South Korea and Russia, stretching from the Sea of Okhotsk in the north to the East China Sea and Taiwan in the south...
ese naval base at Kao
Kao, Indonesia
Kao is a small coastal town on the eastern Indonesian island of Halmahera. It is located in the North Halmahera Regency, part of the province of North Maluku. It is connected by a coastal road to Tobelo, about an hour's drive to the north. Kao cemetery is located to the northwest of the town....
Bay.

In 1999 and 2000 Halmahera was the site of violence that began as a purely ethnic dispute between residents of (mainly Christian) Kao
Kao
Kao may refer to:* Kao, a Japanese term for face., a stylized signature or a mark used in place of a signature in China and Japan* Kao , a crater on the Moon.* Kaō , a Japanese era name* Kao , a film by Michiyo Okusu...
and (entirely Muslim) Malifut sub-districts and then took on a religious nature as it spread through much of the North Moluccas (see: Maluku sectarian conflict
Maluku sectarian conflict
Sectarian conflict in the Maluku Islands of Indonesia between 1999 and 2002 killed thousands of people and displaced over 1/2 million.In the late 1990s, Indonesia was experiencing the devastating economic and political effects of the East Asian Financial Crisis which affected Indonesia more than...
). Thousands of people on Halmahera were killed in the fighting between religious militias. In June 2000, about five hundred people were killed when a ferry
Ferry
A ferry is a form of transportation, usually a boat, but sometimes a ship, used to carry primarily passengers, and sometimes vehicles and cargo as well, across a body of water. Most ferries operate on regular, frequent, return services...
carrying refugee
Refugee
A refugee is a person who outside her country of origin or habitual residence because she has suffered persecution on account of race, religion, nationality, political opinion, or because she is a member of a persecuted 'social group'. Such a person may be referred to as an 'asylum seeker' until...
s from the fighting on Halmahera sank off the northeast tip of Sulawesi
Sulawesi
Sulawesi is one of the four larger Sunda Islands of Indonesia and is situated between Borneo and the Maluku Islands. In Indonesia, only Sumatra, Borneo, and Papua are larger in territory, and only Java and Sumatra have larger Indonesian populations.- Etymology :The Portuguese were the first to...
island. Conspiracy theories about this event abound. A memorial to this tragedy can be found in Duma village in North Halmahera district.

Today, much transportation to the rest of Indonesia is through connections on the provincial capital, Ternate
Ternate
Ternate is an island in the Maluku Islands of eastern Indonesia. It is located off the west coast of the larger island of Halmahera, the center of the powerful former Sultanate of Ternate....
island; although Tobelo
Tobelo
Tobelo is a town and also a district on the eastern Indonesian island of Halmahera. It is the capital of the regency of North Halmahera, part of the province of North Maluku. The city was formalised as the capital of North Halmahera in the district elections held in 2004...
, the largest town on Halmahera, also has direct ferry and cargo sea links to Surabaya
Surabaya
Surabaya is Indonesia's second-largest city with a population of over 2.7 million , and the capital of the province of East Java...
and Manado
Manado
Manado is the capital of the North Sulawesi province of Indonesia. Manado is located at the Bay of Manado, and is surrounded by a mountainous area. The city has about 405,715 inhabitants, making it the second-largest city in Sulawesi after Makassar...
.

Particularly since the inauguration of the first ever directly elected Bupati (Regent or District Head), Tobelo is undergoing rapid development and is aiming at rivaling Ternate's historical dominance. Tobelo has the advantage of expansion potential, being surrounded by flat land. Ternate is limited by its size, being a small island which can be driven around in 45 minutes. Also, the provincial government has plans to move the provincial capital to Sofifi
Sofifi
Sofifi is a settlement on the west coast of the Indonesian island of Halmahera, and since 2010 has been the capital of the province of North Maluku. Previously, Ternate City had been the capital....
, a small village on the Halmahera coast opposite Tidore
Tidore
Tidore is a city, island, and archipelago in the Maluku Islands of eastern Indonesia, west of the larger island of Halmahera. In the pre-colonial era, the kingdom of Tidore was a major regional political and economic power, and a fierce rival of nearby Ternate, just to the north.-Geography:Tidor...
island.

Halmahera is the site of several mining
Mining
Mining is the extraction of valuable minerals or other geological materials from the earth, from an ore body, vein or seam. The term also includes the removal of soil. Materials recovered by mining include base metals, precious metals, iron, uranium, coal, diamonds, limestone, oil shale, rock...
projects.

PT Weda Bay Nickel operates a Weda Bay Nickel|Nickel and Cobalt mining project in North and Central Halmahera Regencies. Backed by the Eramet
Eramet
Eramet is a French multinational mining and metallurgy company, listed on the Euronext Paris exchange under the symbol ERA.The company produces non-ferrous metals and derivatives, nickel alloys and superalloys, and high-performance special steels....
corporation, the project is currently in the planning and exploration stages.