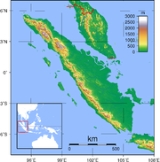 Overview
Sumatra is an island in western Indonesia
Indonesia
Indonesia , officially the Republic of Indonesia , is a country in Southeast Asia and Oceania. Indonesia is an archipelago comprising approximately 13,000 islands. It has 33 provinces with over 238 million people, and is the world's fourth most populous country. Indonesia is a republic, with an...
, westernmost of the Sunda Islands
Sunda Islands
The Sunda Islands are a group of islands that form part of the Malay archipelago.They are further divided into the Greater Sunda Islands and the Lesser Sunda Islands.-Administration:...
. It is the largest island entirely in Indonesia (two larger islands, Borneo
Borneo
Borneo is the third largest island in the world and is located north of Java Island, Indonesia, at the geographic centre of Maritime Southeast Asia....
and New Guinea
New Guinea
New Guinea is the world's second largest island, after Greenland, covering a land area of 786,000 km2. Located in the southwest Pacific Ocean, it lies geographically to the east of the Malay Archipelago, with which it is sometimes included as part of a greater Indo-Australian Archipelago...
, are shared between Indonesia and other countries), and the sixth largest island in the world at 473,481 km2 with a population of 50,365,538. Its biggest city is Medan
Medan
- Demography :The city is Indonesia's fourth most populous after Jakarta, Surabaya, and Bandung, and Indonesia's largest city outside of Java island. Much of the population lies outside its city limits, especially in Deli Serdang....
with a population of 2,109,330.

Settler colonies were arriving in Sumatra in 500 BC and several significant kingdoms flourished there.

What is the fault for off western coast of sumatra indonesia?
More

I am interested in finding out the family history of my Dutch ancestors in Sumatra. All I know is that my ancestors the van Weine family or Weine had ...
More
x