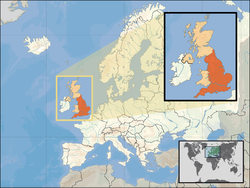 England is a country
Country
A country is a region legally identified as a distinct entity in political geography. A country may be an independent sovereign state or one that is occupied by another state, as a non-sovereign or formerly sovereign political division, or a geographic region associated with a previously...
that is part of
Countries of the United Kingdom
Countries of the United Kingdom is a term used to describe England, Northern Ireland, Scotland and Wales. These four countries together form the sovereign state of the United Kingdom of Great Britain and Northern Ireland, which is also described as a country. The alternative terms, constituent...
the United Kingdom
United Kingdom
The United Kingdom of Great Britain and Northern IrelandIn the United Kingdom and Dependencies, other languages have been officially recognised as legitimate autochthonous languages under the European Charter for Regional or Minority Languages...
. Its 51,092,000 inhabitants account for more than 83% of the total UK population, while its mainland territory occupies most of the southern two-thirds of the island of Great Britain
Great Britain
Great Britain or Britain is an island situated to the northwest of Continental Europe. It is the ninth largest island in the world, and the largest European island, as well as the largest of the British Isles...
. England is bordered by Scotland
Scotland
Scotland is a country that is part of the United Kingdom. Occupying the northern third of the island of Great Britain, it shares a border with England to the south and is bounded by the North Sea to the east, the Atlantic Ocean to the north and west, and the North Channel and Irish Sea to the...
to the north, Wales
Wales
Wales is a country that is part of the United Kingdom and the island of Great Britain, bordered by England to its east and the Atlantic Ocean and Irish Sea to its west. It has a population of three million, and a total area of 20,779 km²...
to the west and the North Sea
North Sea
In the southwest, beyond the Straits of Dover, the North Sea becomes the English Channel connecting to the Atlantic Ocean. In the east, it connects to the Baltic Sea via the Skagerrak and Kattegat, narrow straits that separate Denmark from Norway and Sweden respectively...
, Irish Sea
Irish Sea
The Irish Sea separates the islands of Ireland and Great Britain. It is connected to the Celtic Sea in the south by St George's Channel, and to the Atlantic Ocean in the north by the North Channel. Anglesey is the largest island within the Irish Sea, followed by the Isle of Man...
, Celtic Sea
Celtic Sea
The Celtic Sea is the area of the Atlantic Ocean off the south coast of Ireland bounded to the east by Saint George's Channel; other limits include the Bristol Channel, the English Channel, and the Bay of Biscay, as well as adjacent portions of Wales, Cornwall, Devon, and Brittany...
, Bristol Channel
Bristol Channel
The Bristol Channel is a major inlet in the island of Great Britain, separating South Wales from Devon and Somerset in South West England. It extends from the lower estuary of the River Severn to the North Atlantic Ocean...
and English Channel
English Channel
The English Channel , often referred to simply as the Channel, is an arm of the Atlantic Ocean that separates southern England from northern France, and joins the North Sea to the Atlantic. It is about long and varies in width from at its widest to in the Strait of Dover...
. The capital is London
London
London is the capital city of :England and the :United Kingdom, the largest metropolitan area in the United Kingdom, and the largest urban zone in the European Union by most measures. Located on the River Thames, London has been a major settlement for two millennia, its history going back to its...
, the largest metropolitan area in Great Britain, and the largest urban zone in the European Union
European Union
The European Union is an economic and political union of 27 independent member states which are located primarily in Europe. The EU traces its origins from the European Coal and Steel Community and the European Economic Community , formed by six countries in 1958...
by many measures.

The following outline is provided as an overview of and topical guide to England:

Main article: Geography of England
Geography of England
England comprises most of the central and southern two-thirds of the island of Great Britain, in addition to a number of small islands of which the largest is the Isle of Wight. England is bordered to the north by Scotland and to the west by Wales...

Government and politics of England


Law and order in England


History of England by period


History of England by subject


Economy and infrastructure of England

Types of schools in England