Encyclopedia
A form of government, or form of state governance, refers to the set of political institutions by which a government
Government
Government refers to the legislators, administrators, and arbitrators in the administrative bureaucracy who control a state at a given time, and to the system of government by which they are organized...
of a state
State (polity)
A state is an organized political community, living under a government. States may be sovereign and may enjoy a monopoly on the legal initiation of force and are not dependent on, or subject to any other power or state. Many states are federated states which participate in a federal union...
is organized. Synonyms include "regime type" and "system of government".

On the surface, identifying a form of government appears to be easy, as all governments has an official form. United States is a federal republic
Federal republic
A federal republic is a federation of states with a republican form of government. A federation is the central government. The states in a federation also maintain the federation...
while the former Soviet Union was a socialist republic. However self-identification is not objective, and as Kopstein and Lichbach argue, defining regimes can be tricky. For example, election
Election
An election is a formal decision-making process by which a population chooses an individual to hold public office. Elections have been the usual mechanism by which modern representative democracy operates since the 17th century. Elections may fill offices in the legislature, sometimes in the...
s are a defining characteristic of a democracy, but in practice elections in the former Soviet Union were not "free and fair" and took place in a single party state. Thus in many practical classifications it would not be considered democratic.

Another complication is that a huge number of political systems originate as socio-economic movements and are then carried into governments by specific parties
Political party
A political party is a political organization that typically seeks to influence government policy, usually by nominating their own candidates and trying to seat them in political office. Parties participate in electoral campaigns, educational outreach or protest actions...
naming themselves after those movements. Experience with those movements in power, and the strong ties they may have to particular forms of government, can cause them to be considered as forms of government in themselves.. 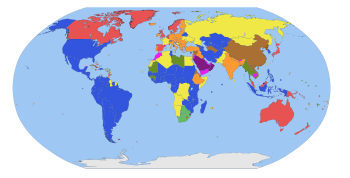