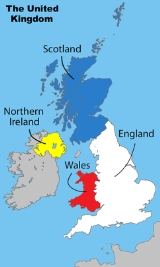 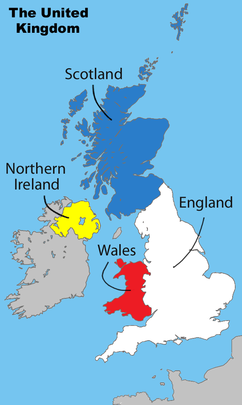 Various terms have been used to describe England, Northern Ireland, Scotland and Wales.


The official term rest of the UK (RUK or rUK) is used in Scotland, for example in export statistics and in legislating for student funding.

The United Kingdom is generally considered to be a close union by its inhabitants, with shared values, language, currency and culture, and with people moving and working freely throughout.

According to the British Social Attitudes Survey
British Social Attitudes Survey
The British Social Attitudes Survey is an annual statistical survey conducted in Great Britain by the since 1983. The BSA involves in-depth interviews with over 3,000 respondents, selected using random probability sampling, focused on topics including newspaper readership, political parties and...
, there are broadly two interpretations of British identity, with ethnic and civic dimensions:
Of the two perspectives of British identity, the civic definition has become the dominant idea and in this capacity, Britishness
Britishness
Britishness is the state or quality of being British, or of embodying British characteristics, and is used to refer to that which binds and distinguishes the British people and forms the basis of their unity and identity, or else to explain expressions of British culture—such as habits, behaviours...
is sometimes considered an institutional or overarching state
Sovereign state
A sovereign state, or simply, state, is a state with a defined territory on which it exercises internal and external sovereignty, a permanent population, a government, and the capacity to enter into relations with other sovereign states. It is also normally understood to be a state which is neither...
identity. This has been used to explain why first-, second- and third-generation immigrants are more likely to describe themselves as British, rather than English, Scottish or Welsh, because it is an "institutional, inclusive" identity, that can be acquired through naturalisation and British nationality law
British nationality law
British nationality law is the law of the United Kingdom that concerns citizenship and other categories of British nationality. The law is complex because of the United Kingdom's former status as an imperial power.-History:...
; the vast majority of people in the United Kingdom who are from an ethnic minority feel British. However, this attitude is more common in England than in Scotland or Wales; "white English people perceived themselves as English first and as British second, and most people from ethnic minority backgrounds perceived themselves as British, but none identified as English, a label they associated exclusively with white people". Contrawise, in Scotland and Wales, all people identified more strongly with Scotland and Wales than with Britain. Many people in Cornwall regard themselves as Cornish and British but not English.

Studies and surveys have reported that the majority of the Scots and Welsh see themselves as both Scottish/Welsh and British though with some differences in emphasis. The Commission for Racial Equality
Commission for Racial Equality
The Commission for Racial Equality was a non-departmental public body in the United Kingdom which aimed to tackle racial discrimination and promote racial equality. Its work has been merged into the new Equality and Human Rights Commission.-History:...
found that with respect to notions of nationality
Nationality
Nationality is membership of a nation or sovereign state, usually determined by their citizenship, but sometimes by ethnicity or place of residence, or based on their sense of national identity....
in Britain, "the most basic, objective and uncontroversial conception of the British people is one that includes the English, the Scots and the Welsh". However, "English participants tended to think of themselves as indistinguishably English or British, while both Scottish and Welsh participants identified themselves much more readily as Scottish or Welsh than as British". Some persons opted "to combine both identities" as "they felt Scottish or Welsh, but held a British passport
British passport
British passports may be issued to people holding any of the various forms of British nationality, and are used as evidence of the bearer's nationality and immigration status within the United Kingdom or the issuing state/territory.-Issuing:...
and were therefore British", whereas others saw themselves as exclusively Scottish or exclusively Welsh and "felt quite divorced from the British, whom they saw as the English". Commentators have described this latter phenomenon as "nationalism
Nationalism
Nationalism is a political ideology that involves a strong identification of a group of individuals with a political entity defined in national terms, i.e. a nation. In the 'modernist' image of the nation, it is nationalism that creates national identity. There are various definitions for what...
", a rejection of British identity because some Scots and Welsh interpret it as "cultural imperialism imposed" upon the United Kingdom by "English ruling elites", or else a response to a historical misappropriation of equating the word "English" with "British", which has "brought about a desire among Scots, Welsh and Irish to learn more about their heritage and distinguish themselves from the broader British identity". The propensity for nationalistic feeling varies greatly across the UK, and can rise and fall over time.

Following devolution and the significant broadening of autonomous governance throughout the UK in the late 1990s, debate has taken place across the United Kingdom on the relative value of full independence
Independence
Independence is a condition of a nation, country, or state in which its residents and population, or some portion thereof, exercise self-government, and usually sovereignty, over its territory....
.

England, Northern Ireland, Scotland and Wales each have a national football team, and compete as separate national teams at the various disciplines in the Commonwealth Games
Commonwealth Games
The Commonwealth Games is an international, multi-sport event involving athletes from the Commonwealth of Nations. The event was first held in 1930 and takes place every four years....
. At the Olympic Games
Olympic Games
The Olympic Games is a major international event featuring summer and winter sports, in which thousands of athletes participate in a variety of competitions. The Olympic Games have come to be regarded as the world’s foremost sports competition where more than 200 nations participate...
, all the countries of the UK are represented by the Great Britain and Northern Ireland team, although athletes from Northern Ireland can choose to join the Republic of Ireland's Olympic team. In most sports, except association football, Northern Ireland participates with the Republic of Ireland in a combined All-Ireland team, for example rugby union, cricket and the tennis
Tennis
Tennis is a sport usually played between two players or between two teams of two players each . Each player uses a racket that is strung to strike a hollow rubber ball covered with felt over a net into the opponent's court. Tennis is an Olympic sport and is played at all levels of society at all...
Davis cup
Davis Cup
The Davis Cup is the premier international team event in men's tennis. It is run by the International Tennis Federation and is contested between teams of players from competing countries in a knock-out format. The competition began in 1900 as a challenge between Britain and the United States. By...
team.