Encyclopedia
The Organization of Ibero-American States is an intergovernmental organization, comprising the Portuguese
Portuguese language
Portuguese is a Romance language that arose in the medieval Kingdom of Galicia, nowadays Galicia and Northern Portugal. The southern part of the Kingdom of Galicia became independent as the County of Portugal in 1095...
- and Spanish
Spanish language
Spanish , also known as Castilian , is a Romance language in the Ibero-Romance group that evolved from several languages and dialects in central-northern Iberia around the 9th century and gradually spread with the expansion of the Kingdom of Castile into central and southern Iberia during the...
-speaking nations of America
Americas
The Americas, or America , are lands in the Western hemisphere, also known as the New World. In English, the plural form the Americas is often used to refer to the landmasses of North America and South America with their associated islands and regions, while the singular form America is primarily...
and Europe
Europe
Europe is, by convention, one of the world's seven continents. Comprising the westernmost peninsula of Eurasia, Europe is generally 'divided' from Asia to its east by the watershed divides of the Ural and Caucasus Mountains, the Ural River, the Caspian and Black Seas, and the waterways connecting...
, plus Equatorial Guinea
Equatorial Guinea
Equatorial Guinea, officially the Republic of Equatorial Guinea where the capital Malabo is situated.Annobón is the southernmost island of Equatorial Guinea and is situated just south of the equator. Bioko island is the northernmost point of Equatorial Guinea. Between the two islands and to the...
in Africa
Africa
Africa is the world's second largest and second most populous continent, after Asia. At about 30.2 million km² including adjacent islands, it covers 6% of the Earth's total surface area and 20.4% of the total land area...
.

The Organization of Ibero-American States for the Education, Science and Culture (OEI) is an international organization for inter-governmental cooperation between the Latin American countries in the field of education, science, technology and culture in the context of the integral development, democracy and regional integration.

The seat
Seat (legal entity)
In strict legal language, the term seat defines the seat of a corporation or organisation as a legal entity, indicating where the headquarters of this entity are located...
of its General Secretariat is in Madrid
Madrid
Madrid is the capital and largest city of Spain. The population of the city is roughly 3.3 million and the entire population of the Madrid metropolitan area is calculated to be 6.271 million. It is the third largest city in the European Union, after London and Berlin, and its metropolitan...
, Spain, and it maintains regional offices in Argentina, Brazil, Colombia, El Salvador, Spain, Mexico and Peru, with field offices in Chile, Honduras, Nicaragua and Paraguay.

The financing of the OEI and its programs are covered by obligatory quotas and voluntary contributions by the governments of the member states and by the contributions by institutions, foundations and other organizations interested in improvement of the educational quality and in scientific and cultural development.

It is presided in honour by the King of Spain.

The OEI was founded in 1949 under the title of the Office of Latin American Education and with the character of an international agency, as a result of the 1st Latin American Education Congress in Madrid. In 1954, the 2nd Latin American Congress of Education took place in Quito
Quito
San Francisco de Quito, most often called Quito , is the capital city of Ecuador in northwestern South America. It is located in north-central Ecuador in the Guayllabamba river basin, on the eastern slopes of Pichincha, an active stratovolcano in the Andes mountains...
, and it was decided to transform the OEI into an intergovernmental organization, integrated by sovereign States, and it was so constituted on the 15 of March 1957 at the 3rd Latin American Congress of Education celebrated in Santo Domingo
Santo Domingo
Santo Domingo, known officially as Santo Domingo de Guzmán, is the capital and largest city in the Dominican Republic. Its metropolitan population was 2,084,852 in 2003, and estimated at 3,294,385 in 2010. The city is located on the Caribbean Sea, at the mouth of the Ozama River...
; they subscribed the first Statutes of the OEI, effective until 1985.

In 1979 the Congress met for the 4th Latin American of Education in Madrid; in 1983 the 5th took place in Lima
Lima
Lima is the capital and the largest city of Peru. It is located in the valleys of the Chillón, Rímac and Lurín rivers, in the central part of the country, on a desert coast overlooking the Pacific Ocean. Together with the seaport of Callao, it forms a contiguous urban area known as the Lima...
, and in May 1985 it held an Extraordinary Meeting of the Congress in Bogotá
Bogotá
Bogotá, Distrito Capital , from 1991 to 2000 called Santa Fé de Bogotá, is the capital, and largest city, of Colombia. It is also designated by the national constitution as the capital of the department of Cundinamarca, even though the city of Bogotá now comprises an independent Capital district...
, in that it was decided to change the old name of the OEI to the present one, keeping the abbreviations and extending its objectives. This modification affected only the name of its organ of Government, the Latin American Congress of Education, became the General Assembly. In December 1985, during the Meeting of the Directive Council in Panama, its members acted as plenipotentiaries of their respective States and in plenary sessions, powers of the General Assembly, subscribed the present Statutes of the OEI, which replaced the statutory text of 1957 and they approved the Organization Regulations.

Since the I Latin American Conference of Government and Chiefs of State
Ibero-American Summit
The Ibero-American Summit , is a yearly meeting of the heads of government and state of the Spanish-...
(Guadalajara
Guadalajara, Jalisco
Guadalajara is the capital of the Mexican state of Jalisco, and the seat of the municipality of Guadalajara. The city is located in the central region of Jalisco in the western-pacific area of Mexico. With a population of 1,564,514 it is Mexico's second most populous municipality...
, 1991), the OEI has promoted the Conferences of Ministers of Education, as instances of preparation for the summits, and for the execution of the educative, scientific and cultural programs delegated to it.

The Organization of Ibero- American States for the Education, Science and the Culture, make the principles that are based on and fulfilling its obligations in agreement with the Statutes, it established the following general aims:

The General Assembly, that is the supreme authority of the Organization; be integrated by Representatives or Official delegations the Member States.

It is, also the legislative instance that it establishes the general policies of the OEI, studies, it evaluates and it approves the Plan of Activities of the Organization, the Program and Global budget and fixes the quotas annual, and meets to choose to Secretary General by the corresponding period.

Its main mission is the one to consider and to approve the report of activities, the Program and Budget biennial and financial statement of the Organization.

The General Secretariat is delegated organ permanent of the General Assembly for executive direction of the OEI and shows its presentation in relations with the Governments, the international organizations and with other institutions. Té has to its position the direction; cnica and administrative of the Organization and the execution of the programs and projects.

The General Secretariat is structured internally by a system of flexible organization, adapted to the policies, the strategies and the Plan of Activities. 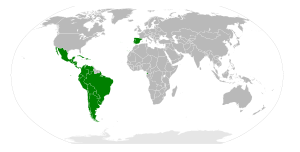 Argentina
Argentina
Argentina , officially the Argentine Republic , is the second largest country in South America by land area, after Brazil. It is constituted as a federation of 23 provinces and an autonomous city, Buenos Aires...

Chile
Chile
Chile ,officially the Republic of Chile , is a country in South America occupying a long, narrow coastal strip between the Andes mountains to the east and the Pacific Ocean to the west. It borders Peru to the north, Bolivia to the northeast, Argentina to the east, and the Drake Passage in the far...

Colombia
Colombia
Colombia, officially the Republic of Colombia , is a unitary constitutional republic comprising thirty-two departments. The country is located in northwestern South America, bordered to the east by Venezuela and Brazil; to the south by Ecuador and Peru; to the north by the Caribbean Sea; to the...

Costa Rica
Costa Rica
Costa Rica , officially the Republic of Costa Rica is a multilingual, multiethnic and multicultural country in Central America, bordered by Nicaragua to the north, Panama to the southeast, the Pacific Ocean to the west and the Caribbean Sea to the east....

Cuba
Cuba
The Republic of Cuba is an island nation in the Caribbean. The nation of Cuba consists of the main island of Cuba, the Isla de la Juventud, and several archipelagos. Havana is the largest city in Cuba and the country's capital. Santiago de Cuba is the second largest city...

Mexico
Mexico
The United Mexican States , commonly known as Mexico , is a federal constitutional republic in North America. It is bordered on the north by the United States; on the south and west by the Pacific Ocean; on the southeast by Guatemala, Belize, and the Caribbean Sea; and on the east by the Gulf of...

Nicaragua
Nicaragua
Nicaragua is the largest country in the Central American American isthmus, bordered by Honduras to the north and Costa Rica to the south. The country is situated between 11 and 14 degrees north of the Equator in the Northern Hemisphere, which places it entirely within the tropics. The Pacific Ocean...

Panama
Panama
Panama , officially the Republic of Panama , is the southernmost country of Central America. Situated on the isthmus connecting North and South America, it is bordered by Costa Rica to the northwest, Colombia to the southeast, the Caribbean Sea to the north and the Pacific Ocean to the south. The...

Paraguay
Paraguay
Paraguay , officially the Republic of Paraguay , is a landlocked country in South America. It is bordered by Argentina to the south and southwest, Brazil to the east and northeast, and Bolivia to the northwest. Paraguay lies on both banks of the Paraguay River, which runs through the center of the...

Peru
Peru
Peru , officially the Republic of Peru , is a country in western South America. It is bordered on the north by Ecuador and Colombia, on the east by Brazil, on the southeast by Bolivia, on the south by Chile, and on the west by the Pacific Ocean....

Portugal
Portugal
Portugal , officially the Portuguese Republic is a country situated in southwestern Europe on the Iberian Peninsula. Portugal is the westernmost country of Europe, and is bordered by the Atlantic Ocean to the West and South and by Spain to the North and East. The Atlantic archipelagos of the...

Spain
Spain
Spain , officially the Kingdom of Spain languages]] under the European Charter for Regional or Minority Languages. In each of these, Spain's official name is as follows:;;;;;;), is a country and member state of the European Union located in southwestern Europe on the Iberian Peninsula...